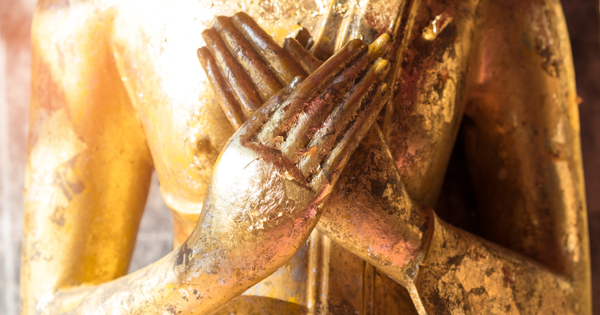 An eye for an eye only ends up making the whole world blind.

In keeping with this project of ours, I believe, and it is my opinion, that a good man takes sides.  He also changes sides.  And he considers, thoughtfully, when to take a side or when to change a side.

Choice is the important thing – not just the freedom to make a choice, but also the freedom to make an informed choice.  In this regard there is a choice to be made, a side to be taken, or a side to be changed, when it comes to war and violence.  Which is why I am choosing to share with you a review I wrote some years back for a book by Satish Kumar titled, The Buddha and the Terrorist.

My intention in bringing this review out of the digital mothballs (it originally appeared in KGB Bar Lit) is not political, nor do I care to get into a debate about foreign policy.  My only desire is to bring attention to writing that challenges perceptions and inspires dialogue relevant to the fractiousness of our times.  As written in the book’s jacket, “No one can read The Buddha and the Terrorist without thinking about the root causes of terrorism, about good and evil, about justice and forgiveness, about the kind of place we want the world to be, and, most important, about the most productive and practical way to get there.”

I suggest meditating before reading The Buddha and the Terrorist. Take time before opening this diminutive 121-pager to focus on the cover art: the faded azure sky, the lush fruit tree mirrored and introverted by a skeletal web of roots …. Only when you’ve cleared your mind of exterior concerns, thus achieving that rarefied state of “being wholly in the moment,” should you commence reading. Then, awash in Zen calm, be prepared to lose it: The Buddha and the Terrorist will prick at your present emotions, alter your past perceptions, and challenge your future actions.

“New Age” verbiage aside, The Buddha and the Terrorist is a solidly crafted, simply-worded book requiring the time span of one Yoga class to finish, but necessitating a far greater commitment to fully ingest and interpret. Kumar – an Indian-born monk turned author and prominent spiritual thinker – retells the classic Buddhist tale of Angulimala, a murderous outlaw whose transformation into a peaceful monk inspired legions of followers to adopt a creed of non-violence. Kumar’s word choice, plotting structure, and dramatic emphasis, artfully (if not covertly) make this ancient tale of sin and redemption apropos with the violent conflicts gripping a post 9/11 world. Its rhetoric is easily paralleled to the “non-negotiation” and “retribution” rhetoric familiar with the Bush administration after the attacks. For example, Angulimala is labeled a “hater of human beings” who will never change. His persecutors then declare that people who help him are either “with us or they are against us. If they are giving refuge to a terrorist, then they should also be punished.”

However, The Buddha and the Terrorist is not an anti-American policy rant disguised as parable. It’s an equal opportunity revealer, uncovering the dehumanizing pitfall of those who use violence to problem solve. “All efforts of control over and conflict with others end in tears, frustration, disappointment, or war,” the Buddha explains to Angulimala. Then, to the unconvinced King, “Fire cannot be extinguished by adding more fuel. Only water can extinguish fire. Only with love can we overcome hate. Only with trust can we overcome fear.”

In addition to updating the story of Angulimala, Kumar also infuses The Buddha and the Terrorist with a sprinkling of psychoanalytic precepts. At times, the book reads more like a philosophical self-help tome than anti-violence tract. As the Buddha tells one of his ardent followers, “When you are free of pride and prejudice, when you are calm and attentive, a light will shine within you […]. You will be your own light.”

Although non-violence as a means of utopia is not a novel idea, it is a spiritual path that must be readdressed in a world spiraling more toward Armageddon than Eden. The power of The Buddha and the Terrorist, however, is not in its grand vision of world peace, but rather in its focus on the individual – the impact one person’s courageous choice, in this case Angulimala’s, can have on countless others. Kumar does not sugarcoat the ostracism, ridicule, and perhaps even physical harm that will be returned upon those who do go against the tide of violence, but as it is spelled out in his book, if we are not willing take up this spiritual spear, we will certainly die by it.

And that is a conclusion with no end.

END_OF_DOCUMENT_TOKEN_TO_BE_REPLACED

Facebook29Tweet3PinEmailShares32
wpDiscuz
Share this ArticleLike this article? Email it to a friend!
Email sent!