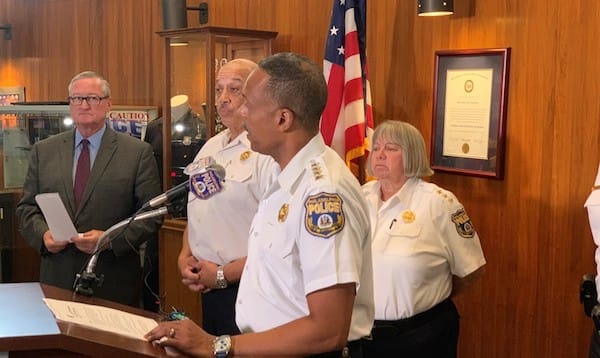 8.6.19: Philadelphia – (Politics): A sorrowful tone enveloped the voice of Philadelphia’s top cop on Monday afternoon as he expressed deep concern for America following this past weekend’s back-to-back mass shootings in El Paso, Texas and Dayton, Ohio.

The dual massacres – which racked up a collective total of thirty-four deaths and scores of injuries – occurred simultaneously with 15 Chicagoans shot in two separate incidents, and only one weekend after three people were killed in a mass shooting at a food festival in Gilroy, California.

With such frequent gun violence, Mr. Richard Ross worries that the inhabitants of this nation are becoming de-sensitized to the carnage. But as for himself, and those officers who submit to his leadership, apathy is not an option.

On Monday night, police officers in the Northwest section of the city were engaged in active shooters drills. It’s a common training here, with thousands of officers having already completed the exercise, Mr. Ross said. But the instructions do take on a different context in the aftermath of this weekend.

“While we have no threats to Philadelphia, or the region, we’d be remiss if we didn’t always look at this,” the police commissioner said at a podium situated in the lobby of the department’s headquarters. “We never assume that they can’t happen here,” he later added.

So far this year, roughly 69 people in America have been killed in mass shootings, TIME reports. Despite August 6th being only the 218th day of 2019, there have been 255 mass shootings to date, according to data from the nonprofit Gun Violence Archive (GVA).

A common blame for the aforementioned statistics is Americans’ easy reach to guns: there are 327 million people in this country and nearly 400 million civilian-owned firearms. Both the El Paso and Dayton shooters purchased their guns legally.

“I do believe this country is completely enamored with guns,” said Mr. Ross, who on Monday urged lawmakers in D.C. to act to prevent more bloodshed.

The bloodshed in America may be contributing to the uptick in police suicide, Mr. Ross surmised. Police officers are witnessing things no human-being was ever intended to see, he said.

“After a while, you just get exasperated by the whole thing. You look at it … and you just listen … and your heart breaks for these families … man, oh man, it just breaks to see this over and over again. It shouldn’t happen in this country … it just shouldn’t happen.”

There’s no one solution to mitigating these mass shootings, the commissioner acknowledged. But that shouldn’t deter action, he implied.

And while Mr. Ross didn’t offer many specifics on the laws he would want changed, he did say the proposition of universal background checks, which enjoys support from 97 percent of Americans, should be prioritized.

“We’ve gotta do as much as we can, and I just think we can do more.”