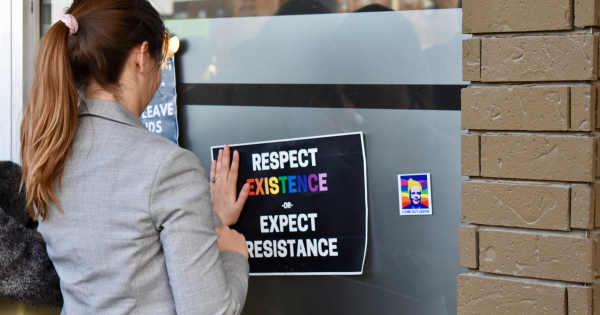 International Pronouns Day is the third Wednesday of October, which was October 16th this year.

My pronouns are they/them. But more on that later.

I’ve been thinking a lot lately about why, of all the LGBTQ+ issues, the matter of using declared pronouns seems to upset so many people. As I wrote recently, I think one of the drivers is having to internalize an acceptance of transgender identity as being valid, which I see as a bigoted perspective, but I think there’s something relatively more benign at work, too.

I was raised in a binary world. I speak a language that is drenched in gendered language, although not as much as French, Spanish, or German. In order to speak effectively, we’re expected to assume the gender of strangers.

When I was a child, the default generic pronoun was still usually “he.” Feminism pushed for more inclusive language, which led to “he or she.” I remember style guides and English teachers encouraging me to rewrite singular to plural if I wanted to use the more comfortable “they” instead of the clunky “he/she.”

I was told repeatedly, “Each student should bring their pencil” was flat-out wrong. In reality, however, this generic use of “they” in the singular is very old, perhaps even older than singular “you,” and yet we use “you” as a singular pronoun without even thinking about it. Last week, someone even told me non-ironically, while arguing that “they” is plural, that we should have a plural version of “you.”

We function just fine without a number distinction on “you.” We don’t need one on “they” either. It’s just habit, it’s just language, and language can be changed.

However, changing one’s language is usually a major struggle. People frequently resist changes, often becoming downright hostile when they feel like they’re being told to change or be judged. This is the source of many a complaint about “PC Culture.” Unless you’re keeping yourself focused on a specific topic, it’s easy to lose track.

When I was a child, someone was “transgendered” if they were a man who was transitioning to become a woman, or vice versa. We even had abbreviations so we knew which direction the transition was happening: M>F or F>M.

Now, that first sentence is fraught with problems: The proper term is transgender, and “transgendered” is considered a slur. Transgender women are women and have never been men: For the part of their lives that they were identified as men, that was incorrect. You can be a transgender woman without going through a medical process (although drag queens are not categorically transgender). And a transgender person might not identify with either of the binary genders. Some LGBTQ+ folk consider anyone who is not cisgender (compliant with the gender they were assigned at birth) to be transgender.

So now, the “most correct” thing to say is that someone is transgender if their current gender identity doesn’t match what the one they were assigned at birth. Say something else and risk the umbrage of social justice warriors.

And this might change at any time. If you’re not actively focused on this topic, you run the risk of using outdated language and being seen as boorish.

So I understand the anxiety about changing language. I’m in my own bad habits: For instance, while I know that Sam Smith uses “they/them” pronouns, I look at their picture and think “he.” Language habits are tough to break.

Even attempts on the part of well-meaning people can backfire. It’s common to refer to someone’s “preferred” pronouns: After all, we’re respecting someone’s preference by using the pronouns they prefer, right?

Unfortunately, wrong. For most people, pronouns aren’t a preference: There’s a correct set of pronouns, and everything else is wrong. People will certainly vary on how insistent they are that the correct pronouns be used, but that’s different than saying that’s a preference.

And I do understand the argument that, by calling them “preferred pronouns,” people are generally trying to highlight that they’re seeking to treat the person how they want to be treated. But transgender people struggle with having their identities being treated as whims or fantasies, and the prevailing (often unintended) interpretation is that “preferred” suggests such a whim.

And while there seems to be a lot of resentment among cisgender folks when told to use proper pronouns when those pronouns don’t match what the cisgender folks have decided… try misgendering a cisgender person. Most of them will get upset and perhaps even violent.

Most everyone can understand how it feels to have inappropriate pronouns being used, but many people struggle with extrapolating that feeling to people whose gender identities they don’t understand.

All this said, it still feels weird to me to insist that other people use my pronouns for me. My pronouns are they/them, but you can use he/him (or she/her, or anything else). I won’t correct you.

So why don’t I push the issue for myself? Why don’t I demand that people use “they/them” when referring to me?

First of all, as I said, I’m still in my own bad habits. I don’t feel like it’s fair to demand that other people talk about me in a certain way when I’m still thinking in certain ways myself.

More than that, though, most of time that we use third person pronouns, the person isn’t even there. I think this is part of why asking about pronouns feels like a taboo or strange question. When we ask someone’s pronouns, I feel like we’re basically asking, “How should I refer to you when I’m talking about you behind your back?”

Here’s the position I feel like I’m putting someone in: “So did you give Paul what he was asking for?” “Yes, and by the way, Paul uses ‘they.’” “What? I don’t understand that. Explain it to me.”

My fight against gendered language is not anyone else’s. If someone else wants to take it up with me, great. If not, I don’t want to put them in a position of fighting it in my absence or feeling like I’m going to judge them later if they don’t.

Obviously, the end point here involves non-binary pronouns being normalized so that this isn’t even an issue. In some parts of the English-speaking world, that’s already the case. My immediate culture, its combination of age, location, and language conservatism, isn’t there yet. Maybe it will be in a few years. Maybe it never will be. But until it is, I don’t feel it’s right to drag unwilling people into my fight.
—

—
Photo by Denin Lawley on Unsplash

Facebook43Tweet1Pin1EmailShares45
wpDiscuz
Share this ArticleLike this article? Email it to a friend!
Email sent!