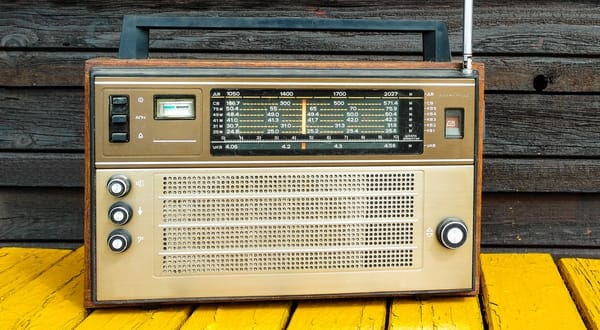 —
The sounds of radio at night were comforting. When I felt popular music was worth more of a listen, radio was equally worth the time for my ears. In the years I was in grade school I often wound down the evenings by hanging out in my room tuned in to the local airwaves. Occasionally I might flip to the Prince Edward Island stations since they were easily obtainable most evenings. Some of the really clear nights I might pick up baseball games along the eastern seaboard. It took a little while for me to even realize that long before television this is how sports games were broadcast.

I fell asleep nightly to the radio for a number of years. This seems funny to me because now if a pin drops, my instinct is to bolt right out of bed thinking someone has broken in to steal a pin that has dropped on the floor.

The favourite 5 countdown turned on at 8 p.m. every single night. The evening DJ had nothing really to do anyway so he was happy to take phone calls. He had a running list of a current set of popular songs and would encourage people to vote by calling them in. On more than one occasion, I attempted to phone in Guns N Roses “It’s So Easy” in the hopes of getting some swear words on the air. If memory serves, this was a B side to “Sweet Child O Mine”. The jockeys were fully aware the song had some swearing. So they never would have played it. Even if I were to convince all of the towns to call in their votes.

Local radio still played an entertaining role by the time I entered high school. This time it would be to hear the brave souls who would call the dedication line to “dedicate” the selected song to someone they loved, or hated. Or both.

So many of us were in on the act. When we were not trying to dedicate the songs to the girls we wanted to chase, we were dedicating the songs to fictional people with obviously fake names. Many times we might just shout something into the phone and hang up. Someone called and dedicated a song to their favourite pair of shoes. One of the absolute best dedications was some kid calling up the station to dedicate the song to “Pee-Wee Herman from his hands”. The disc jockey completely lost it for a good minute. Laughing hysterically.

The dedication line eventually did come to an end. It was just getting too overwhelming. It was completely taken over by some occasionally brilliant jokers. At the beginning of what I will call the “caller ID era” of telephone use, a long-time DJ finally snapped at one caller who called with a death threat. He promptly phoned them back live on the air proclaiming “Hi! Thanks for being an idiot and have a great night” before pressing play on the song.

That was the end of the dedication line chapter of radio days.