Get Daily Email
Join/Login CLOSE
Home / Featured Content / Are Self Driving Cars Good for the Environment? 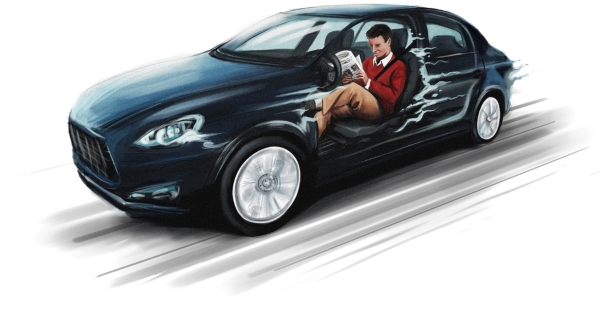 You know the future is here when you see that the car beside you at a red light has nobody at the helm. That’s already happening in California where a few companies (Uber, Google, Apple, Tesla) have begun testing autonomous vehicles on the open road—albeit with human drivers at the ready in case anything goes wrong. Meanwhile, the major automakers have begun integrating autonomous driving technologies (blind spot detection, GPS mapping, assisted parking, etc.) into existing models, and will surely offer their own fully self-driving cars once lawmakers qualify them as street legal, maybe as early as 2018.

Proponents say that not only will driverless cars make our roads safer (as they can sense walkers, bikers, other cars, and road infrastructure to avoid collisions), but will also be a boon to the environment. Zia Wadud, who co-authored a study released earlier this year assessing the travel, energy and carbon impacts of autonomous vehicles, says the widespread adoption of the technology could reduce energy consumption significantly. “Automated vehicles can interact with each other and drive very closely as a ‘platoon’,” reports Wadud. “This can reduce the total energy consumption of road transport by 4% to 25% because vehicles which follow closely behind each other face less air resistance.” Beyond the platoon benefit, driverless cars can also shave another 25 percent off overall automotive energy consumption through more efficient computer-assisted ride optimization.

Yet another environmental benefit could be fewer cars on the road altogether. “Your car could give you a lift to work in the morning and then give a lift to someone else in your family—or, for that matter, to anyone else: After delivering you to your destination, it doesn’t sit idle in a parking lot for 20-plus hours every day,” report MIT researchers Matthew Claudel and Carlo Ratti in a recent McKinsey.com article. “By combining ride sharing with car sharing … it would be possible to take every passenger to his or her destination at the time they need to be there, with 80 percent fewer cars.” They conclude that clearing four of five cars from the road would have “momentous consequences” for our cities regarding pollution, traffic, efficiency, and parking.

But Jason Bordoff of Columbia University’s Center on Global Energy Policy argues in The Wall Street Journal that driverless cars hurt overall energy efficiency by undermining public transit: “If you can work, watch a movie or sleep while in the car, perhaps you will take a car rather than public transportation or be more likely to drive for long trips.” He adds that autonomous vehicles also “significantly expand the universe of potential drivers” bringing more people (and cars) onto the road and possibly increasing total vehicle miles traveled overall. “Even car-sharing services could increase energy demand if the ease and convenience pull people away from mass transit, walking or biking and into cars.”

Bordoff remains optimistic that autonomous vehicles can provide a net gain for society and the environment, but only if we are careful about how we implement the technology. “To ensure that autonomous vehicles deliver economic, energy security and environmental benefits, we will need supporting policies targeted at those objectives, such as increased fuel-economy standards, investments in public transportation infrastructure, and R&D in alternative vehicle technologies.”

For his part, Wadud agrees with Bordoff that driverless cars could actually be bad for the environment depending on how things shake out. “Let’s not be blinded by the driverless cars by saying they can solve everything – know that there could be risks and be careful about them,” he says. “That said, I do hope that driverless cars will encourage car sharing and help reduce our energy use and carbon emissions. However, what will happen in reality remains to be seen.”

EarthTalk® is produced by Roddy Scheer & Doug Moss and is a registered trademark of the nonprofit Earth Action Network. To donate, visit www.earthtalk.org. Send questions to: [email protected].

This post previously published on Earth Talk and is republished with the permission of the authors.