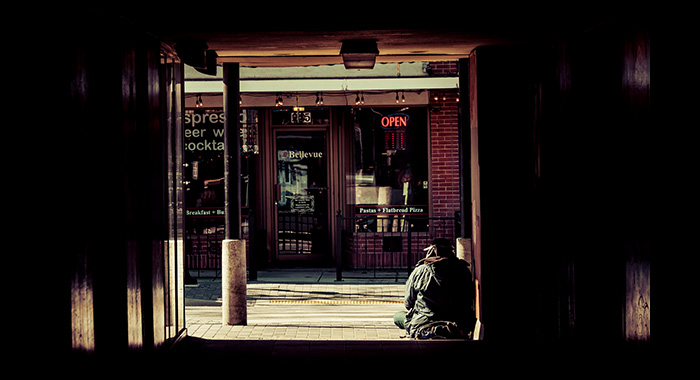 Next time I’m standing at a corner on Elm Street in Manchester, NH., sharing a slice of meat lovers pizza and an orange soda with a homeless person on a Friday night talking about sports or family, or about the missteps we’ve taken in life, I’m going to ask them if they’ve seen more of a willingness from their fellow Mancunians to thumb a quarter their way, or slide a buck into a cup, since the foot traffic downtown has gathered steam.

I’ve wondered about this a lot, for some reason, over the last couple months. Not so much about the foot traffic (that’s evident), but more about the wellness of others. Don’t know why. Could have something to do with the interaction I had with a homeless guy I met who was sitting, cold and wet in an alley downtown on a recent night, slumped against a brick wall draped in his only possessions.

Along with my fellow night crawlers, we find the back alleys downtown to be a more conducive way to get to our destination. Our conversations seem to flourish in such a setting, a mere block over from the lights and hustle on Elm Street. Delirious with enthusiasm, we ready ourselves for the night as we pardon our vices for a few short hours.

Marching our way through the alley this night, three wide and two deep, I don’t know what caused me to tail off from the group and stand before this stranger from the street who looked beaten to shit by life. I could barely even see his face, which was tucked way down into his neck, trying to keep his cheeks warm from the cold drizzle.

Ever since my mother died, I don’t know, I’ve gone soft. I feel everything. Everything touches me: the good, the bad and everything in between. I’m a pincushion of emotion. And when I saw this stranger, I needed to engage with him for some reason. Again, I don’t know why. I had nothing to say, not much more than a few babbling observations to offer.

Most weeks, by Friday, I have talked to about 100 people and answered a hundred questions, then asked a hundred more. I’ve done two radio shows and shouted at my son countless times to stop sucker-punching me in the throat. I really just want to loosen my belt, shed some skin and pour some beer down my throat.

Not talk. No mas.

But, the stranger was looking at me now with one eye sticking out from his coat collar, as if saying, “Can I help you buddy? Tell me you’re not going to ruin my life even more.”

For a moment I just looked at the waterlogged stranger, who was older than 40 but looked closer to 50, then I finally said, “Wanna grab a slice of pizza, guy?” I had nothing else in the tank! It felt like the first time I had a conversation with a girl on the phone as a teenager. I’m surprised I didn’t ask him if he brought his lunch to school or bought it.

His eyes lit up! Like a jack rabbit, the stranger jumped to his feet, shaking off the heavy dew clinging to his ravaged coat. “Sure. I’ll get some pizza.”

We walked and talked our way down the alley, getting a feel for each other, soon figuring out neither of us were planning to harm the other. After all, it was just a slice of pizza. Not exactly a date, but I’ve been on worse. We went over to Torched and slunk our way past the cool kids with beards and muscles and yoga thighs that encased “Bonfire,” a sweltering mass of millennials getting down with the times.

Into Torched we went, and the set-up was perfect. Open glass cases showcasing the various slices – veggie, meatball, sausage, all kinds of jive. The pie looked hot too, like it hadn’t been sitting there since 2 p.m., frustratingly limp.

The stranger looked at me,as if saying, “What next?” as he stood before a server gripping a grease-stained pizza peel handle. “Grab a slice, dude.” I said. “Whatever you want. I’m going with a widow maker.”

We ordered three meat lover slices, two for him, one for me. I’m an insufferable sloth of a man, but I had some more beer to drink. Two slices would have killed my night. My friends had already veered off towards the Shaskeen, and I needed to reach them before the rooster crowed midnight.

We turned around to the fountain drinks and I think I heard the stranger slightly gasp when I said, “Grab a drink, too. You got one coming.” As if standing before a line-up of ladies at the Bunny Ranch, the stranger’s eyes rode the selections of soft drinks as if he was following a ball rush around a roulette wheel.

“What can I get?” he asked me, never turning his eyes away from the soda handles.

We stepped outside and found an archway to stand under, then we carved into our slices. I asked him if I could grab the first sip off the orange soda he chose. He handed it to me and said, “Of course. You bought it. Have the whole thing.” I took a deep slug and handed the drink back to him. “All yours, guy. Too much sugar gives me gas.”

With that, after gabbing it up for a good 15 minutes like old pals, the pizza grease soaking what was left of the strangers teeth, we said our goodbyes, likely never to meet again. Or maybe many times again. Who knows how long this softness will last? But I had a rooster to catch, and he needed to get back to his spot in the alley, or find a new place to dry out – one preferably that smelled of cheese and red sauce.

Red sauce and cheese. Who would have thought one slice of pizza would mean so much to two travelers of the night, each going in opposite directions, but looking for the same thing. One man trying to fill his belly, the other trying to fill his soul.

The Good Men Project invites you to help lead this conversation about the changing roles of men in the 21st century. Join us!

Rob Azevedo, from Manchester, NH, is a writer, filmmaker and radio host. He can be reached at [email protected]

Facebook54TweetPinEmailShares54
wpDiscuz
0
0
Would love your thoughts, please comment.x
()
x
| Reply
Share this ArticleLike this article? Email it to a friend!
Email sent!