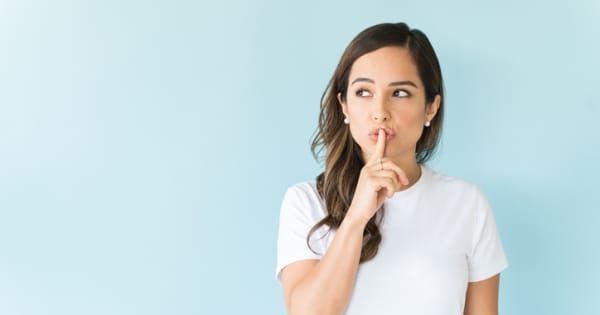 —
I subscribe to the belief that in relationships that you should pick your battles. If you don’t, it is easy to fight with another person about every decision. You come from different perspectives, backgrounds and share different experiences. You are not always going to meet eye-to-eye.

But, there is a difference between choosing not to argue about something or make it in issue than it is to silence yourself.

Self-Silencing is a chronic mindset of staying quiet because you think sharing your thoughts will threaten the relationship and you choose to prioritize the needs of the other person over your own needs.

According to a recent study, women who self-silenced had an increase in the risk of plaque in their arteries, which made them more vulnerable to stroke, heart attack, and cardiovascular trouble. They were also more prone to depression, anger, and sleep issues, which all can lead to heart disease.

Anger suppression is not self-regulation. It’s self-abandonment in response to possible retaliation, disconnection or loss. The person decides that rather than risk the disconnection from the other person that they will disconnect from self, deny their emotions and silence their thoughts.

Research shows, that over a 10 year-period it increased a woman’s mortality rate by 4 times over a woman who freely speaks her mind.

The cost of being quiet to get along could be a higher price to pay than some realize.

Aggression in girls and women is discouraged. Society encourages women to be nice, pleasing and genuinely accepting despite how you might feel on the inside. I believe men are also forced to bite their tongue in relationships and can also be susceptible to self-silencing if they have an emotionally fragile or manipulative partner. However, overall, it is more socially acceptable for a man to display anger or to have outlets for his anger.

The goal of this is not to pit men against women or to make women appear long-suffering in relationships.

It is to draw attention to how disagreements in relationships are handled and an awareness that if you are winning because the other person isn’t saying what they think to avoid a confrontation that you may in fact still be losing as they are putting their health at risk.

Also, if you are the one who is self-silencing to avoid having intimate conversations or being vulnerable than you are doing so at a disadvantage to your health and, eventually, hurting your partner when your health fails. Do the ends justify the means?

An argument that is ignored doesn’t go away. It is transformed into resentment and then resentment poisons everything, including the relationship.

On the show, All in the Family, the main character, Archie Bunker, would tell his wife, Edith, to “stifle herself.” It was a joke that has played out in many movies and tv shows where the wife keeps her thoughts to herself instead of speaking out or challenging her husband’s ego and need to be right.

In contrast, many of the sitcoms in the late ’80s and early 90’s introduced opinionated wives who counseled their husbands instead of chastised them. The husbands valued them as partners and intelligent heads of the household.

If you can’t talk to your partner without them shutting you down, then you are making it really difficult to have true intimacy.

Intimacy requires safety in expressing yourself, behaviors and knowing that the other person will still love you and won’t reject or abandon you while you show your vulnerability.

Some of us, don’t know how to do this or how to handle the vulnerability of our partner. It can invoke anger in one or both partners to end up on either side of an argument.

There is no one right way for each couple to handle their disagreements. It has to work for both partners and they have to adjust their communication style to fit how both of them can hear what they may not want to hear. It generally involves changing the perception of why your partner is arguing with you. It’s usually to gain understanding.

The important thing is to remember that you aren’t fighting each other, you are fighting the problem. If you are willing to win at all costs, you are fighting dirty against your partner. If you shut down; stone wall them; manipulate them with guilt or hurl curse words and names at them; you are being emotionally abusive.

Most of all, you are creating an environment where your partner may feel like self-silencing is their only recourse to having a harmonious relationship.

For others of us, you may have been self-silencing your whole life. You may have done it in your childhood to keep the peace with dominating or strict parents who didn’t listen to you or your needs. You may do it at work, with friends and with siblings. You are continuing to use the same tactics to manage your relationship. If this is you and you are quiet in every area of your life where you need to speak up, you are putting yourself at risk for a stroke.

Speaking up for yourself doesn’t have to be an argument. If you can find a way to communicate while making it a safe space to disagree, then there is no argument to be had. If you can’t accomplish this on your own, a couples counselor can give you the tools to handle conflict

Facebook41TweetPinEmailShares41
wpDiscuz
Share this ArticleLike this article? Email it to a friend!
Email sent!