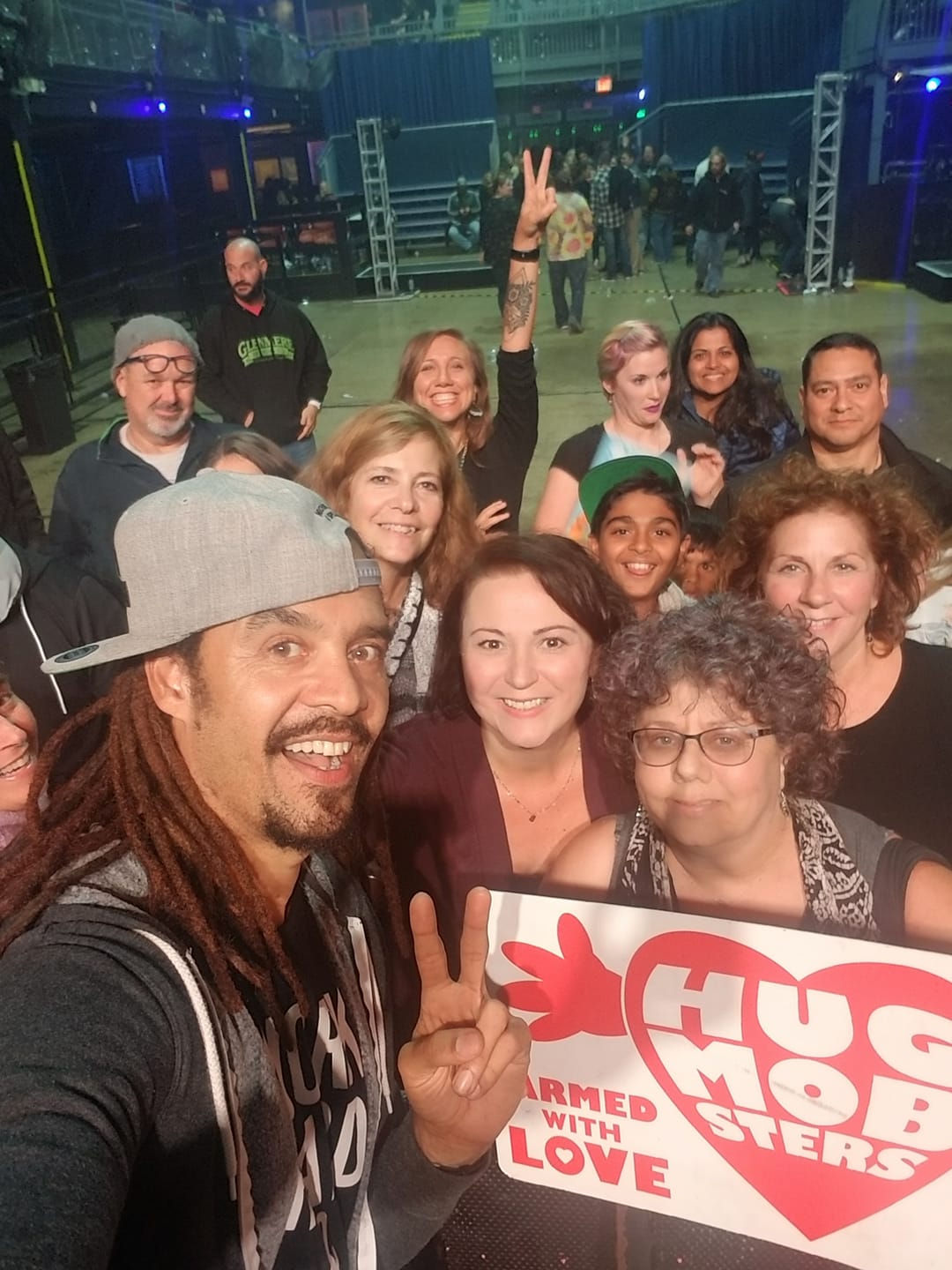 Music is my lifeblood. It infuses me with energy and inspiration. I sing along, dance along, write along and dream along to it. One of my favorite artists who came into my life with the release in 2006 of his album called Yell Fire! is Michael Franti. I first heard this musician, activist, and barefoot yogi on WXPN and from the first note, I was hooked. The way I describe the genre is that it is hip hop, rap, and reggae, “not the women are bitches and ‘ho’s’ style, but rather love and life-affirming.”

I had the pleasure of meeting and interviewing Michael shortly afterward, when he, Sharon Gannon and David Life (Jivamukti Yoga teachers) facilitated a workshop at Omega Institute called Power to the Peaceful. It combined music, yoga and peace and social justice. The only way it could have gotten any more enticing for me was if they offered chocolate. One of my fondest memories of the weekend was when I was sitting on the floor in a large meeting room where the activities took place and I had just finished interviewing Sharon and David. Michael comes charging in, dreads flying, does a belly flop and slides in, declaring enthusiastically, “Okay, I’m ready for my interview!”

When the opportunity arose to see him here in Philly, for the Stay HumanTour knew I had to be in the crowd.  Uncharacteristically, I waited until the last minute to make the final plans. I had posted something on Facebook to see if anyone I knew was going. Five minutes later, my friend Jessica chimed in that several were planning on being there and that one of their friends couldn’t make it and I could purchase her ticket. Once again, the Universe calls us to be where we are meant to be. I had no idea that it would be the unqualified best concert I have ever attended. Hours of high-intensity music, jumping up and down dancing, which he encourages audiences to do, unfolded seamlessly. As a tribute to the healing power of music, was that going in I was nursing a strained Achilles tendon from over-exercise, with a brace supporting my ankle. I wondered how I would manage to stand for hours since the tickets were all general admission with no seats on the main floor. By midnight when I headed home, the pain had whittled down to minor discomfort and that included a seeming super-powered ability to dance.

The concert began with a video message to his toddler son Taj and his wishes that the tiny human sees life through the lens of love, compassion, and cooperation, despite how the world seems at the time. Images of war and destruction were juxtaposed with shots of kindness and beauty and the enthusiastic playing, drumming, eating, and cuddling by the adorable kiddo who was napping backstage during the concert. The family travels together and Sara Agah Franti, nurse, jewelry designer and co-founder of Do It For the Love Foundation (I will be writing another piece on the organization) joined him on stage when he performed one of my favorite songs called Life Is Better With You. The love, passion, playfulness, and commitment between them, was sweetly evident.

From the onset, the concert was a true love-fest. I brought my Hugmobsters Armed With Love Sign and wielded it wildly. Willing huggers opened their arms and hearts. Not that they needed my invitation since Michael encouraged that activity throughout the night. I have never attended a concert that so blatantly put love into action since seeds were planted that I know will sprout out in the world.

More than mere entertainment (that alone would have been well worth the price of admission), it was a call to action for peacemakers of all ages. As I looked around the room, I saw multi-generational families singing and dancing along. At several points, he invited people up to the stage to sing and dance, including, at the end of the concert, all the children who wanted to join him. Their moment in the spotlight that hopefully they will remember forever.

Despite what I imagine was exhaustion following the over the top performance, Michael and the band members took time to greet, hug and take photos with the audience.

The multitudinous moments will remain with me as well, as this Soul-rocker/Hugmobster is heeding the fully human call to be a greater force for good in the world.