Lindsey and I have been married ten years, but it’s only been in the past five that we’ve learned the benefits of wrestling in our marriage. We’ve only recently started to lock arms and go toe-to-toe. We grab each other by the hair and we grapple and toss each other around the room in heated passion.

Okay, maybe not. Not exactly. But my name is Steve Austin and I have heard the jokes about my name for years, so why not?

For the first five years of marriage, Lindsey and I were stuck on pleasing one another and creating a marriage that didn’t look like our parents. We foolishly held everything inside. We never wrestled. We never ripped our shirts and smashed beer cans on our heads and jumped from the top rope. We never raised our voices or fought. We barely even argued. Facebook friends thought our relationship was perfect.

I wouldn’t go back to that place for anything.

You can learn a lot about relationships from the rules of wrestling (italics are mine). 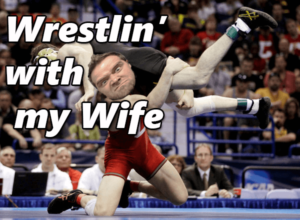 Steve says: What if we humbled ourselves and got down low, serving our spouses, instead of coming at each other with a list of demands?

Steve says: Sometimes the best thing is to take time to “cool down”. Don’t avoid the hard topics, but give yourself space. Once your emotions go down, your rational thinking will return. Then you can come back and talk as adults who care deeply for one another.

Steve says: You won’t always win the argument, and that’s okay. The point isn’t winning or losing; the goal is mutual understanding and respect.

Steve says: This is my favorite one. I’ve had one major near fall and so has Lindsey. Thankfully, the power of a second chance, marriage counseling, and really hard work has enabled us to wrestle through it and stay together.

Just like wrestling, there is protocol that must be followed in marriage. You can only wrestle within the confines of the mat and there are rules that should be followed to make the match (or the marriage) safe for each participant.

Is relationship coaching right for you? Click here to take the quiz! My wife and I have been through some really tough times in the past ten years, but learning the art of wrestling has made us stronger than ever.

Steve Austin is a life coach, speaker, writer, and host of the #AskSteveAustin podcast. Steve's goal is to help clients and audiences create a lifestyle of focused emotional health and clarity. Connect with Steve at iamsteveaustin.com today

Is relationship coaching right for you? Click here to take the quiz! My wife and I have been through some really tough times in the past ten years, but learning the art of wrestling has made us stronger than ever

Facebook18TweetPin2EmailShares20
wpDiscuz
1
0
Would love your thoughts, please comment.x
()
x
| Reply
Share this ArticleLike this article? Email it to a friend!
Email sent!