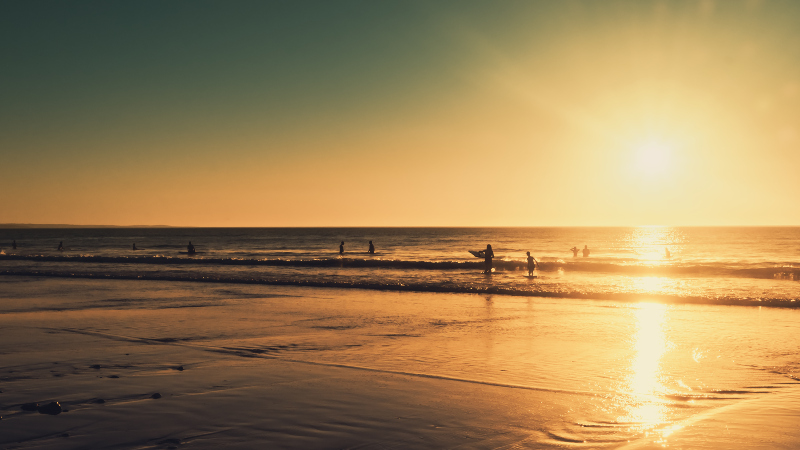 I grew up in San Diego. During the summer and on hot days during the other seasons, I went to the beach often. Though I am not a strong swimmer and I never learned to surf with a board, I loved playing on the shore, jumping into waves, and bodysurfing (riding waves without a board).

After my parents divorced when I was 8 years old, my father got an apartment in the Ocean Beach community of SD. His six children (I was the second eldest) got to spend every other weekend on the coast. We were fortunate to grow up in such a kid-friendly city. When we weren’t at the beach, we were at the Zoo, Sea World, or in parks playing sports, tag, or hide-n-seek.

Rich in locales
All this access to outdoor fun in addition to good weather means we were very spoiled. We weren’t rich in things. We were rich in locales. We were spoiled in all that we were able to see and do every day in “America’s Finest City.” I didn’t really appreciate how good we had it until I left Southern California.

I moved East and for more than a decade I bounced around Boston and then Toronto, before settling in Northern California (Silicon Valley), which is nicer than the cold cities of New England and Ontario, but it’s no San Diego.

Back in San Diego after more than three decades away
Now 35 years later, I’m back home for my first full summer and going regularly to the beach again — especially, Ocean Beach. I had visited home many times over the course of those three-plus decades away, but I was typically only in SD when it was fall or winter, times when it was freezing on the East Coast but also too cold to be in the Pacific Ocean without a wet suit (which I never had).

In the summer, the San Diego ocean water temperature of 70F is warm enough to be tolerable for more than a few minutes, but also cool enough to be refreshing (unlike the tropical bathwater that I found disappointing about Hawaiian beaches).

Slamdancing with waves
For me, this summer of slamdancing with waves was like stepping back in time several decades. I felt so carefree and joyful — like being a kid again. My fondest memories of playing in the ocean were bodysurfing, so on my first trip back to the beach this year I definitely wanted to get into the watery mosh pit again.

But when I tried to recapture my youthful bodysurfing joy, I failed badly. I couldn’t catch a wave. Clearly, I was out of shape for bodysurfing, having not done it in decades, but I couldn’t understand why it wasn’t like riding a bike. I’m sure my body had the muscle memory to do it, but I wasn’t able to catch any waves and ride them. After multiple tries, I was getting depressed at my lameness. Could it be that I’m too heavy now? Fifty pounds heavier than I was in high school? Or too old, lacking the dexterity to position my body in the right way?

With each passing wave without me in it, I thought, “Yeah, I’m too old and that extra weight must be why I can’t bodysurf now. Bummer. Maybe I’ll have to resign myself to being the old man who just sits and looks out to sea, longing for his glory days when he ruled the sun and the surf.”

But then I looked west and I saw the sun was far from setting on my day at the beach. I gave myself a pep talk: “I’m not done yet. No, I’m still young enough for this! Get back out there, fatboy! You don’t need a ‘ardbody to catch waves, mate!” (I don’t know why my inner voice adopted an Aussie accent, but it did.)

And like the baby sea turtles that are hatched on land, I slowly but relentlessly made my way back into the water to try bodysurfing again, unafraid of the potential of more soul-crushing failure.

Catching waves requires experience and patience
There’s a lot of practice required in catching a wave, especially when you’re trying to do it sans handboard and fins. The only thing I had on in addition to my bathing suit was a set of earplugs. (I hate having to pound the side of my head to get the seawater out.)

I like the simplicity of bodysurfing because I’m cheap and I like the feeling of actually being in the wave as opposed to on top of it. I’m quite sure that I’d be the Ocean Beach Wipe-Out King if I ever tried to stand up on a board and ride a wave. I like to imagine the first guy who got the crazy idea of riding a wave on a piece of wood and then standing up on that piece of wood…I’m sure his neighbors must have thought he was the second coming of Jesus.

Like being shot out of a cannon
Catching and riding a wave is all about timing and location. You have to be in the right spot at the right moment. I recalled this when I finally began to have a little success. I noticed that I was well-positioned for catching a wave when I felt the water drop below my waist and the tide started pulling me out. “Yes, I remember this sensation.” And I recall when the waves coming in begin to curl over and suddenly I am rising up with it. Then shazam! I’m being hurdled forward like I’d just been shot out of a cannon.

At first, I wasn’t getting very long rides, maybe only one second before I lost the weightless feeling and fell out of the wave. I really only needed the rides to last a few more seconds to be satisfied. Unlike surfing with a board, a bodysurfing ride may only last two or three seconds and cover five or ten feet, but it’s so exhilarating!

And then it finally happened! I caught a gnarly one, dude! And I was a kid again. I was a dolphin. I was a part of the wave. What a feeling to be pushed through the water like you’re one of Posiden’s favorite creatures and then be engulfed by foamy saltwater as you fall off the “ride” into a spin cycle and roll along the sandy bottom. Ah, cool. “Let’s do that again,” I said to myself. And I did repeatedly until I lost my earplugs.

Unemployed and living in San Diego for the full summer — even during the Summer of the Pandemic — has been a huge blessing. This time has allowed me to rediscover the joy I had as a child on the beach. It has been a great solace for my soul. Being footloose and mask-free as I jump above and into waves has been very therapeutic. I highly recommend it if you’re fortunate enough to be near the coast and the water’s warm enough — and lifeguards are on duty.