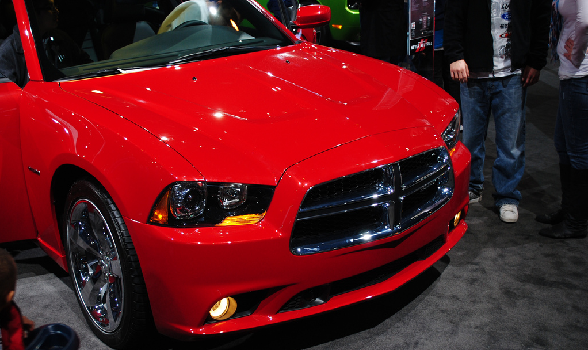 “Yes. You read that correctly. I’m a geeky-ass, hoity-toity motherfucker, and I drive the most obnoxiously meatheaded car currently on the road.”

Hello. My name is Damon Young, and I’m a published author, professional editor, freelance writer, and award-winning blogger. This basically means that I spend two to seven hours each weekday in various Pittsburgh-area coffee shops; writing, sending emails, stressing over things like ”search engine optimization” and “extensible markup language,” trying to “get” Tumblr (I still haven’t), and wondering why (some) white people seem so infatuated with cottage cheese. If you can find Big Boi and Killer Mike in the “A” and on that Kryptonite, you can find me in the “Bakery Square Coffee Tree” and on that… expensive looking faux-oak chair that just might be giving me hemorrhoids.

I’m also an introvert, largely sedentary, completely bespectacled, and I officially have more (and better) conversations with the people living inside of my laptop than, well, real people.

Ah. You need more proof of this nerdiness? Ok. Here’s a list of a few of my favorite things to do when not “working”:

Read old movie reviews (I’m partial to Roger Ebert and Slate.com’s Dana Stevens). Drink milkshakes while simultaneously thumbing my nose to my increasingly violent lactose intolerance. Be violently lactose intolerant. Have staring contests with my (equally nerdy) girlfriend’s cat. Search YouTube for instances of especially colorful cumulonimbuses. Use words like “cumulonimbuses” in sentences. Regularly create and record (in my phone) top 10 lists about things that don’t deserve to be listed, recorded, or remembered. (My latest top 10? “Top 10 Ways To Piss Off a Squirrel”) Have arguments with friends at 1 a.m. over the proper use of “pioneer.” Play Scrabble…by myself…while sitting on the toilet.

Oh, and did I mention that I’m slightly bougie too? No? OK. Well, I’m slightly bougie too. I attend brunches where pheasant omelets and grapefruit mimosas are served. I intentionally date women even bougier than I am just so I don’t feel too bad about being black and (slightly) bougie. I’ve even postponed sex to attend a wine tasting. Twice.

But, I imagine that none of this—the nerdiness, the bougieness, the disturbing bathroom habits—matter to the poor schmoe who almost had his, I don’t know, Honda Civic(?) run off the highway by my Dodge Charger last week.

Yes. You read that correctly. I’m a geeky-ass, hoity-toity motherfucker, and I drive the most obnoxiously meatheaded car currently on the road.

A) I bought it this year, an act which basically screams “Fuck yo couch” to any and every thing green.

B) I drive a car even more obnoxious than the pre-2011 Dodge Charger. It’s like the Dodge people looked at the 2010 version and said to themselves, “You know what? This car isn’t douchey enough. Let’s give it an ass bigger than circa-Selena J-Lo and a grill with an Austin Powers overbite.” Seriously, I’m surprised they didn’t go all the way and just change the name of the company to Dodge, Bitch!

If cars were celebrities, while the Jaguar would be Micheal Caine (sleek and elegant with a tinge of world-weary haughtiness) and the Prius would be Al Gore (pretentious and bloated but ultimately well-intentioned), the Charger would definitely be Mike “The Situation” Sorrentino (obnoxious, oblivious, and a probable carrier of myriad STDs).

What makes the Charger even more objectionable is the fact that it’s not really all that special. If it zips past you fast enough, you could very easily think to yourself, “Wow. Someone sure is driving that Mitsubishi Galant really fast. They should be careful before it explodes.” It definitely doesn’t give you the automatic social climber status that an Audi or a Range Rover might. And while the engine is, well, damn, the acceleration doesn’t really do you much good when making the five-block drive from your townhouse to Trader Joe’s.

The car has even managed to turn me into a (slight) douchebag. Let me put it this way: I’m so much of a “real” hip-hop nerd, er, purist that my laptop houses separate folders for Wu-Tang tracks produced by 4th Disciple, Tru Master, or Allah Mathematics, each listed in reverse chronological order. But, immediately after buying this car, something called a “Rick Ross” suddenly and loudly took over my stereo and sensibilities. Trust me, you haven’t lived until you’ve rolled up to a wine tasting at the Dance Alloy Theater while blasting the chorus to “Tupac Back.”

Yet, while the rest of the educated world seems hell-bent on becoming as ambiguous, androgynous, and asexual as possible—a state of mind perfectly embodied by the embarrassingly self-conscious hybrid Cadillac Escalade—the Charger’s comfort in its own skin is refreshing and surprisingly endearing. (This fact actually, and eerily, extends the Mike “The Situation” analogy even further. Not exactly sure what that means, and not sure I want to find out.) It wants nothing other than to be the biggest, heaviest, ugliest, and fastest four-door sedan on the road, and this self-assuredness has proved to be contagious.

The most difficult part about my recent transition from educator to a full-time writer has been overcoming the angst I’m prone to exhibit when asked what I do for a living. For months I either outright lied or felt a pressing need to explain myself. (“I’m a writer. No, seriously. I have a book. I’ve been published. I’ve been on NPR and shit. Look it up. Please believe me!”) Part of this was due to me anticipating skepticism, but mainly I was just scared to admit it to myself. No more pussyfooting around with writing as a “hobby,” and no more reliance on the “Can’t fail if you don’t try” psychological safety net that comes with not pursuing your passion.

I’ve since overcome this fear. I now own my occupation, I’ve fully eschewed the W-2 for the W-9, and I don’t hesitate to drop my Professional Writer business cards in the “win a free lunch” bowl at Pizza Sola. And, while I wouldn’t cite the Charger as the reason for this change, I wouldn’t dismiss it as coincidence either. Maybe I’ve become more confident by osmosis. Maybe it has hidden transformative powers. Maybe I’m slowly morphing into Big Meech or Larry Hoover. Maybe I actually sold my soul to the devil when signing the final bank loan papers. (This isn’t impossible, btw. Seriously, I have no fucking idea what I signed away that day) Who knows?

I do know, though, that if a 2011 Dodge Charger is behind you while you happen to be in the Pittsburgh area, you better move the hell out of the way. A writer might be driving, and he’ll run you off the road if you make him late for the gallery crawl.
—

For all his bougie, hoity-toity, geeky-assed, brunch-bustin’, lactose intolerant, sedentary nerdiness, he’s still one of the finest h.s. hoopers ever to come out of Western PA, who could stop on a dime, bust a trey in your face, then give you seven cents change, says Dad. “Look it up.”

I’ve had this post in my “to read” folder for weeks now, and I’m glad I waited because this hit me right where I’m at this moment. It’s the Dodge Charger headline that caught my eye. I had to give mine up when I lost my job, which, in turn, forced me to become the one thing I always wanted to be–a writer. Now, I’m getting to the point where I can afford a Charger again which is really cool, because I like the post-2010 models waaaaay better.

I’m glad I’m not the only nerd who thinks that there’s nothing wrong with driving a Charger. All though I don’t drive one I like the juxtaposition.

Good post. One question that I would like to hear you thoughts on…
Do you think the need to buy a Dodge Charger is a method to show folks, “don’t get it twisted, I’m real son” similar to the bunch of black dudes in college who convert their campus student center into “125 and St. Nick” but know that their major is history, philosophy, etc?

Mitsubishi Galants explode all of the time Champ and the world is better for it.

LOL! The more I read, the more I’m convinced we’re somehow related. Excellent post as always. BTW, I posted the “planking” pic of your car over on My350z.com and quite a few mentioned that Charger needs some more aggressive wheels and a slight drop. Might also help out making you even more ‘douchier’, who knows?
:0P

Love this. Whenever I see a Charger, I assume someone’s, ehrmm, compensating. But now, I’ll have to re-think what he might be compensating for, or consider that he might just be taking his male-ness out for a spin.

Hmm, I’m surprised. At the nerd part. Not the bougie or the Charger driver part. I can’t decide if it makes you more sexy or less sexy.

Champ, not only was this well (and hilariously) written, but it conveys such personal introspection that I think many of us can relate to on different levels. Thanks for being so open and sharing, in the candid and witty way only YOU can 🙂

This post is hilarious! It’s clear that you are a great writer. If anyone questions your credentials, tell them to kick rocks in flip flops.

A exceptionally smart brotha would have doubled down on the meatheadedness and gotten the SRT-8. The V6 in the base model is a minivan engine. The mid-level Hemi is respectable, but the SRT-8 is the full metal jacketed version. If you’re going, go deep.

I loved this, though. I thought I was the only nerd (or other people go out of their way to make me think so). This chick here will cut a b*tch for calling me during Jeopardy! ( I am so serious about that). And I’m a car nerd on top of all that. ’71 hemi ‘cuda anyone?

I’ve rented a couple of Chargers. I like them. Those new Camaros, though, are way better.

Being a new blogger myself, I can so relate to this post. I haven’t made the transition into making this my new profession but when that time comes, I can so see myself doing a lot of these things that you’re talking about in this post. Thanks for the extra boost of confidence.

Quality post as always Champ… Who the hell is Damon though?? He sounds like a grown ass lactose intolerant latte sipping black bougie nerd. j/k. Champ fits you better though.

“Quality post as always Champ… Who the hell is Damon though?? He sounds like a grown ass lactose intolerant latte sipping black bougie nerd.”

Facebook95TweetPinEmailShares95
wpDiscuz
27
0
Would love your thoughts, please comment.x
()
x
| Reply
Share this ArticleLike this article? Email it to a friend!
Email sent!