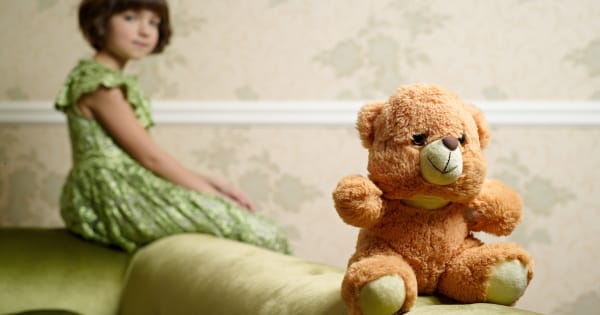 When I was a child, I had a bed full of stuffed animals.

I did not have a happy childhood. I lost my left eye when I was a toddler. According to my father, that delayed my talking for months; I would communicate with grunts and pointing, and refuse to talk. It was only when my father refused to accept the pointing, he claimed, that I started talking. Ironically, perhaps, my own child’s first word was “Dat!”, said while pointing at various objects until I’d hand them to him.

My mother has a personality disorder and was hospitalized for post-partum depression when my younger brother was born; I’m told the same happened after I was born.

My father, like his father before him, and like me when I was younger, had serious anger control problems. This cycle of aggression contributed to my waiting until I was entering my 40s to have a child. I didn’t want to pass it on yet again.

My older brother and I struggled to get along. He treated me fairly much like a brother that was three years old than me. In another context, in another family, there would have not been anything anomalous about our relationship. But ours was our family.

So I had a bed full of stuffed animals. They comforted me. They brought me security in a tumultuous world. Such is the job for stuffed animals in millions of beds around the world.

My father was a United Methodist minister, which meant that we moved every few years. This made it hard for me to make connections outside of my family. So the only consistent anchor I had as a child was a lead weight of a family that dragged me under the water.

I was also not very good at being a boy. My older brother was: He was into baseball; he even dressed as a baseball bat one year for Halloween, wearing a monstrosity of chicken wire and papier-mache that our father had hand made and painted just for him.

While I tried to follow suit (mostly because my father seemed so invested in it), I just wasn’t interested in baseball. Or very good at it. I spent my Little League days sitting in the outfield waiting for balls that rarely came.

My mother had wanted a girl. She wound up with three boys, at least as far as the birth certificates were concerned. She taught me to do needlepoint and to cook. I enjoyed cooking until I became an adult and the toxic masculinity programming took over.

By the time I was seven, I had collected a bed full of friends. And then my father’s church assignment got moved, from Pontiac to Marine City.

We were moving into a larger house, but I was told we all had to make sacrifices. I had to get rid of most of my animals. I could pick a few favorites to keep, but the rest were going to go to charity.

I was seven, so my memories of specifics are vague. But I remember it being my father driving this decision. 1 Corinthians 13:11 has always been a sore point for me, and he may have quoted it at the time: “When I was a child, I spoke as a child, I understood as a child, I thought as a child: but when I became a man, I put away childish things.”

I was seven. I was still a child.

But I did as I was told, hating every moment. I picked out my few favorites, and packed the rest up. I remember going to a charity dropbox in a mall parking lot and putting them in.

I didn’t understand it at the time. I was told I would understand when I was an adult, when I had a child of my own.

This was my bed, and these were my anchors. It was my space.

And I can’t believe that the box what we took to the charity dropbox was so large that it wouldn’t have fit in the moving van. Not with all the books in my father’s library, or the tools in his collection. Many of those specific books, many of those specific tools, were in his retirement home when he died.

It could have been because my father thought they were something wrong with a little boy who was so in love with dolls. The stuffed toys could have been a consistent reminder that one of his boys wasn’t as manly as the other. (My other brother was yet to be born.)

It could have been because both of my parents thought there was something broken about a child that needed a bed full of comfort to sleep. There was, indeed, something deeply wrong with me. I was lacking proper emotional connection to either of my parents.

But that wasn’t going to be fixed by rending my comfort away from me. That was going to be fixed by both of my parents being honest to how they’d each contributed to breaking my family. Instead, even after their divorce, even after all three of their mutual children became adults, they clung to the notion that it was the other parent that had messed us up.

I’m not saying, of course, that all children who sleep in a sea of stuffed toys are all broken and replacing parental love. There are some that just happen to like stuffed animals. Good for them!

But it was true for me, and it was a deep trauma to have it taken away from me so suddenly, and so non-consensually.

As soon as I moved out of my parents’ homes, I started buying stuffed animals again. Before too long, I had an even larger mound than I’d started with. I have since let most of them go, while the rest are in storage or on display. I don’t feel the need to sleep with them anymore. I feel secure without them.

As a parent, I’m told by guides that children are resilient, that they’ll get over even some of the deepest traumas. But I think that depends so much on how we as parents address those traumas. I know I make mistakes with my child, but I hope that I address them in a better way than my parents did with me.

Because this trauma has stuck with me a long, long time.
—

—
Photo by Максим Власенко on Unsplash

Facebook29TweetPin1EmailShares30
wpDiscuz
Share this ArticleLike this article? Email it to a friend!
Email sent!