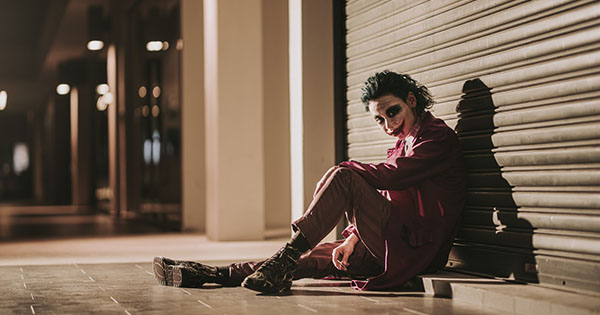 Warning: this article contains spoilers for Joker, so read at your own risk!

I saw Joker, and as I write this I’m still processing its merits as a work of cinematic art. In my opinion, the dialogue felt somewhat heavy-handed and unrealistic, and I found myself wishing they followed the old show-don’t-tell rule of writing. I enjoyed the gritty look of the film, and the depiction of Gotham City as an urban wasteland of the late 20th century. Joaquin Phoenix, per usual, commands the viewer’s attention as the emotionally tortured Arthur Fleck. Whether he makes you unsettled or awed—or a little of both—is up to your individual tastes. Ultimately, Joker seems to have intrigued enough people to sell a massive number of tickets.

I’m still trying to sort out what, if any, social commentary writer and director Todd Phillips tried to purposely inject into the movie. Is the anti-rich sentiment in the film just a means to have Bruce Wayne’s parents murdered at the end? Does the failure of the city to fund the social support system—combined with a citizenry that seems to universally lack empathy—lead to Arthur’s isolation and subsequent transformation into the Joker? Or is this just another film that makes ham-fisted use of mental illness as the reason someone goes on a murder spree?

The latter consideration is, of course, deeply troubling. Research has shown that those with mental illness are much more often the victims of violence, rather than the perpetrators. The still-very-real stigma surrounding mental health issues finds many sufferers ostracized by others. It’s this ostracism that is the more likely culprit behind the birth of the villain called Joker.

Even though Joker heavily implies Arthur Fleck is mentally ill, I’m not convinced. There’s a few alternate possibilities I’d like you to consider that speak to the issue of men’s well-being.

Arthur is a Sad Unreliable Narrator with Bad Beliefs

The film’s story is told from Arthur Fleck’s perspective. Therefore, we must consider the possibility he may be an unreliable narrator, and what we see may be just his own twisted interpretation of reality.

There are scenes in Joker where Arthur goes on obvious—and not so obvious—flights of fantasy. For example, he aspires to be a stand-up comedian. When he performs at an open mic night he seems to bomb at first, but eventually the crowd warms to him. We see later, however, that he did indeed bomb, and is ridiculed publicly on television.

Arthur also imagines he develops a romantic relationship with a female neighbor. Eventually, he winds up in her apartment one night unannounced, and she is justifiably disturbed. Arthur’s dream romance has become a waking nightmare.

But one need not have a mental illness to have an overactive imagination. Arthur’s delusions are more likely the product of his extreme isolation, thanks to a society—and the individuals through which society manifests itself—that has rejected him for being different. The condition that causes him to laugh uncontrollably at times (most likely the real-world condition known as pseudobulbar affect)—as well as his awkwardness and being a victim of abuse—lead to his ostracism.

In the depths of his despair, Arthur turns to his only recourse for any sort of joy in life: his imagination. Unfortunately, the world he creates in his mind is a selfish one, in which his own desires supersede everything else, including the lives of others.

We Can’t Wait for “Society” to Help Marginalized Men

In the real world, many men have become isolated from social contact, unable to develop healthy friendships and romantic relationships. Some of us suffer from mental illness, but many of us have fallen prey to toxic belief systems that are just as fantastical as Arthur’s imaginings.

Sometimes, our sadness makes us vulnerable to ideologies that, for instance, convince us other men are “the enemy” and women are “conniving.” This indoctrination can cause us to self-isolate, putting us in a loop of self-fulfilling prophecy that continually reinforces bad beliefs. Just like Arthur Fleck, we never stop to question our reality, or consider that we ourselves may be the architects of our own isolation. We lose sight of any possible path out of our despair.

Many of us can’t see the path out because we’ve never been taught the tools to do so. It’s all-too-easy to blame individuals for their behavior as if they exist in a social vacuum. It’s also easy to say “society fails” men like Arthur Fleck. We need to stop thinking of society as some monolithic entity that exists outside of each of us. Rather, each of us is a “delivery system” for the merits and flaws of our society. That’s why society works best when more of us take personal responsibility for the care of our fellow citizens, rather than wait for some abstract concept to lend a helping hand that will never come.

The Heroic Mindset is an Antidote for Bad Beliefs

For those of us who have learned to use our internal resources of emotional resilience and empathy, it is up to us to reach out to our fellow men if we see they are in a downward spiral of isolation and toxic ideology. This is why I love the concept of everyday heroism so much. It teaches us to notice opportunities to uplift others and take action to actually help.

Our ancestors weren’t stupid, folks. They realized civilization is a double-edged sword: it provides the shelter of structure to limit risk and provide for us, but it can also become an unthinking status quo that we can slavishly follow to our detriment. This is what gave rise to heroic myths: when society has become stagnant, we need as many individuals as possible to rise up. Heroes help wake us up, to correct the course of civilization back to a more humane direction.

When it comes to modern men, we need more of us to rise above the sometimes-narrow confines of societal conformity. We need more of us to avoid the trap of perpetuating a limited view of what it means to be a man. Let’s make the choice to follow the path of the heroic man, and avoid the pitfall into violent despair depicted in Joker.

Facebook111Tweet1Pin2EmailShares114
wpDiscuz
Share this ArticleLike this article? Email it to a friend!
Email sent!