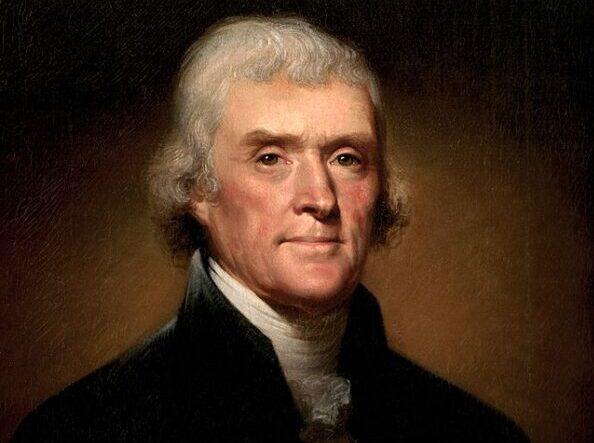 Epictetus and Epicurus give laws for governing ourselves… — Jefferson

’m staying near Washington DC at the moment and took the opportunity to visit the Thomas Jefferson’s Library exhibit at the Library of Congress. I’m the author of several books on Stoicism, including How to Think Like a Roman Emperor: The Stoic Philosophy of Marcus Aurelius. I know that Jefferson, like some of the other Founding Fathers, was well-read in classical philosophy, so I naturally wondered what he thought of Stoicism, the philosophy that most influences me.

However, it’s generally assumed that Jefferson was a follower of Epicurus’ philosophy because he owned several texts on the subject and, in 1819, wrote a letter to William Short stating: “I too am an Epicurean”. In the same letter, although he praises Seneca as a “fine moralist”, he also criticizes certain aspects of Stoicism. Nevertheless, there are obvious Stoic influences in Jefferson’s writings. Indeed, in the same letter he praises the Stoic Epictetus, stressing that he has “given us what is good of the Stoics”, and that he even wished to create a new translation of Epictetus’ works.

A year before he passed away, in 1825, Jefferson was asked by a father to provide advice for his young son. (Who his namesake, incidentally: Thomas Jefferson Smith.) Jefferson’s letter to the boy concludes with a set of rules. Jeffers-on gave them the rather unwieldy title “A Decalogue of Canons for Observation in Practical Life”. However, that just means: Ten Rules to Follow in Daily Life. As we’ll see, although Jefferson had written quite scathingly of Stoicism six years earlier, his advice to this young man contains ideas that appear more Stoic than Epicurean.

The phrase “take things by their smooth handle”, in particular, will be immediately recognized by any student of Stoic philosophy. It’s obviously a paraphrase from one of the books in Jefferson’s personal library: the Enchiridion or Handbook of the philosopher Epictetus.

Julian P. Boyd the historian who edited his papers also arrived at the conclusion that Jefferson must have derived this rule from Epictetus. So what does it mean? Well, Epictetus continues:

In other words, don’t think about other people’s actions by focusing on ideas such as “what he did was wrong” or “what he did was unjust”. Rather focus on ideas that help you to deal more constructively with the situation.

More generally, the Stoics would say that we should avoid making strong value judgments or using emotive language in a way that’s merely upsetting — that’s the “rough” or broken handle. Instead, we should learn to take a step back, suspend emotive value judgments of this kind, and view things as honestly and objectively as possible — that’s the “smooth” handle, the usable one, which leads to practical wisdom and rational problem-solving.

The Other Nine Rules

What about Jefferson’s other nine rules? Well, they don’t mention Stoicism as explicitly but they’re generally consistent with that philosophy. Moreover, several of them are very similar to other prominent aspects of ancient Stoic wisdom. Jefferson owned and had presumably read copies of The Discourses and Enchiridion of Epictetus as well as the writings of Stoics Seneca and Marcus Aurelius, and the works of Cicero who, though not a Stoic himself, wrote extensively and sympathetically about their philosophy.

“Never put off till tomorrow what you can do to-day.”

One of the major themes of Stoicism is the idea that we should bear in mind our own mortality, that life is fleeting. We must therefore pay more attention to our own actions in the here and now. Marcus Aurelius, for instance, criticizes himself for acting as though “you would rather become good tomorrow than be so today (Meditations, 8.22). Indeed one of his most quoted sayings is that “No more of all this talk about what a good man should be, but simply be one!” (Meditations, 10.16).

“Never trouble another for what you can do yourself.”

The Stoics frequently emphasize that we should take responsibility for our own lives. As Epictetus says:

Yes, but my nose runs. For what purpose then, slave, have you hands? Is it not that you may wipe your nose? — Discourses, 1.6

We should not wait for help from others but learn to be self-reliant and to take action where necessary.

“We never repent of having eaten too little.”

Stoicism evolved out of the austere Cynic philosophy, which preceded it. Like the Cynics, the Stoics were known for eating a simple diet and training themselves to control their appetite. For example, we’re told of the Stoic teacher Musonius Rufus:

He often talked in a very forceful manner about food, on the grounds that food was not an insignificant topic and that what one eats has significant consequences. In particular, he thought that mastering one’s appetites for food and drink was the beginning of and basis for self-control. — Lecture, 18

Stoics like Epictetus made the virtue of temperance, or moderation, the basis of their training. They believed that without self-control in basic matters such as our daily use of food and drink we inevitably lack the self-discipline required to exercise wisdom more generally in our lives.

“When angry, count ten, before you speak; if very angry, a hundred.”

The Stoics believed that anger was perhaps the most dangerous of unhealthy passions. We have an entire book on the subject that survives today by Seneca called On Anger. In it, he claims that the first Roman emperor, Augustus, who had trained in Stoicism, though known for violence earlier in life, learned to conquer his anger.

The late Emperor Augustus also did and said many memorable things, which prove that he was not under the dominion of anger. — On Anger, 3.23

Although Seneca doesn’t mention it in his book, we know from another source that Augustus’ Stoic tutor showed him basically the same technique that Jefferson describes in his rules:

Athenodorus, the philosopher, because of his advanced years begged to be dismissed and allowed to go home, and Augustus granted his request. But when Athenodorus, as he was taking leave of him, said, “Whenever you get angry, Caesar, do not say or do anything before repeating to yourself the twenty-four letters of the alphabet,” Augustus seized his hand and said, “I still have need of your presence here,” and detained him a whole year, saying, “No risk attends the reward that silence brings.” — Plutarch, Moralia, Sayings of Romans: Caesar Augustus

A couple of people have pointed out to me that in various letters, Jefferson would draw up recommended reading lists. These include the works of Cicero, texts dear to his heart which contain much Stoic influence, and also the Memorabilia of Socrates, dialogues which particularly influenced the Stoics. However, Jefferson also specifically recommends reading the Letters and Essays of Seneca, the Enchiridion of Epictetus, and The Meditations of Marcus Aurelius — all the major surviving Stoic texts in fact.

Jefferson did identify more with Epicureanism than with Stoicism, at least at one point in his life. However, he was evidently more interested in Stoicism and influenced by its teachings than is generally recognized. He studied all of the major surviving Stoic texts and encouraged others to do so also. More importantly, though, he found the Stoic teachings of Epictetus, in particular, valuable as a guide to living wisely, and continued to draw upon them in the advice he gave to others.