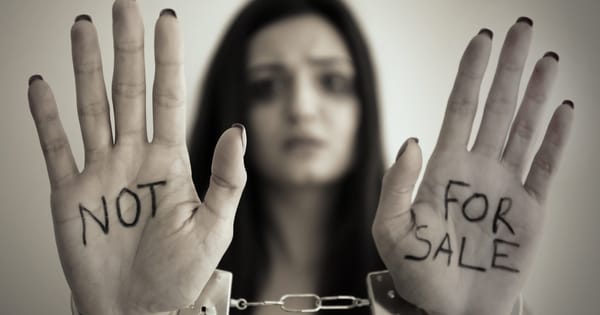 Last Thursday, Tulsa Community College held a Human Trafficking Awareness presentation. I attended not only as part of my Intercultural Communications class but because of my interest in the topic through The Sad Girl. I was planning on taking a bunch of notes for this post, but it didn’t quite work out that way.

As we entered the auditorium, everyone received one of the ubiquitous blue-and-white name tags and was asked to fill it out. The activities office had cookies and punch for us, and I totally did not manage to spill my punch two minutes after sitting down. That was a different old bald guy.

Kristin Weis of The Demand Project spoke first, telling us about her path from Colorado to Tulsa. In 2004, she and her husband Jason saw a news report about a man who recorded his rape of his three-year-old daughter and shared it online. What disturbed them more was learning that thousands of people then logged on to view the video. They left Colorado, moved to Tulsa, then started working with Stop Child Trafficking. After several years there, they moved on to start The Demand Project in 2013.

Kristin talked about the programs they have for survivors, including mentorship (because some survivors have lost any sense of boundaries, and have no concept of appropriate behavior), legal support to get charges expunged, and Victim Advocate Support Teams. They also recently launched FAST Guardian Houses, a tough-love safe house system for minor victims.

TDP also has a Teen Tech Team, where they rely on teens to keep them informed about what the newest apps are for messaging and hiding your online activities. These “vault apps” look and function like others, such as a calculator, until you enter a particular key sequence. Then the vault portion unlocks so you can view hidden texts or messaging conversations. That’s how kids hide inappropriate photos or conversations, making it harder for parents to know what their kids are doing.

Rebecka Snyder spoke next, and I found myself unable to continue taking notes. She’s a straight-A student at TCC, and just received a full ride to the University of Arkansas, which is all pretty awesome. What makes it even more impressive is where she was just a few years ago. Rebecka was kidnapped at 16 from Buffalo, NY, and forced into prostitution for ten years.

She was kidnapped at gunpoint after testifying regarding a murder she was aware of. The gang that was involved then sold her for $150,000 to a man in Arizona. Rebeckah says she doesn’t remember how much she was sold for the next two times but recalls that her price went up to $275,000 at her fourth and final sale. From there she was shuttled, to California to Nevada to Louisiana to Florida to Arkansas, passing through another half-dozen states in her travels.

Over those ten years, she was raped an average of 34 times a day.

It’s just an average, you say. True. But every single one of those was a rape. You can say she had sex with 34 johns a day, but if she didn’t consent, or only consented because refusal meant death, is it really consent?

34 times a day, for probably close to 360 days a year. That’s thousands of times a year for prices ranging from $40 to $500. Running some crude numbers, that works out to a low end of about $400,000 a year from one girl. Rebeckah said they’d work in crews of 4-6 girls at a time. Extending those numbers, that’s over $2 million a year from one crew and a large gang might have three or four crews running. Those numbers show why trafficking is such a lucrative business. Someone can only sell a baggie of meth or heroin once. But they can sell a girl over and over.

And when one girl is used up? They can find another easily enough. The National Center for Missing and Exploited Children believes that on average, a runaway minor is approached by a trafficker within about 48 hours of leaving home. Then there are the guys who cruise apps like Viber, Whisper, Kik, and others looking for girls who want a boyfriend. They’ll invest a few hours over the course of a few weeks convincing the girl they’re in love and should meet, and see what happens from there. If the girl meets them, she becomes another statistic. If she doesn’t, they’ll move on to the next girl. Because there’s always a next girl.

During her presentation, Rebeckah showed a picture of a motel she was prostituted out of in Oklahoma City, off El Reno near the Brickyard.

I recognized the motel. I stayed there four years ago, back when I worked at a weekend gun show in OKC. It’s not really a bad neighborhood.

This is happening everywhere.

She asked for help on a regular basis. People ignored her. She was told after one arrest that even though she claimed she was being trafficked, that local law enforcement didn’t have the resources to pursue that case, and it was easier to get her to plead out to the prostitution charge than to pursue a trafficking case.

What are the practical effects of ten years like that? Addictive behavior, for starters. Rebeckah has been clean four years, she said. Drug use was a survival mechanism. The pimps want the girls compliant, and the girls don’t want to feel anything, so heroin is the perfect answer for both sides. PTSD and attachment issues are part of the package, too.

There are legal repercussions as well. Even though Rebeckah was a victim of trafficking, and not acting of her own free will, she was still charged with a variety of offenses, such as identify theft, drug possession, distribution, conspiracy, and theft. Those charges prevented her from traveling to Australia recently when she received an academic award because she can’t get a passport.

That’s part of what The Demand Project’s legal team works on. Trafficking victims commit a variety of offenses, but in a very real sense, their lives depend on it. They don’t get days off for being sick or hurt. Rebeckah said she suffered over 230 rib fractures in ten years from being beaten.

She got five bucks a day for food, plus whatever she could hustle or steal from her johns.

What did she and her fellow victims do for clothes? They bought them at Walmart, just like everyone else. They’d go through the store with a pimp and maybe a handler, three or four young girls with an older man. No one ever looked twice or questioned the arrangement.

No one ever offered to help.

At the end of Rebeckah’s presentation, she asked us each to remove our name tags and pass it to the person next to us. “That’s how easily they changed my name when they sold me. My name became Jessica,” she said. It was one more way to control the girls and one more thing to take from them. The girl sitting next to me was Stevie.

I talked with Kristin after the presentation and mentioned my background and degree program. She directed me to their intern coordinator, who emailed me an application. I’ve talked it over with Diana, and I’m going to fill it out and see what kind of conversation results.

I know I’ve got some skills that would be useful to The Demand Project. You probably do too. The only way we’re going to end human trafficking is to put those skills to use.