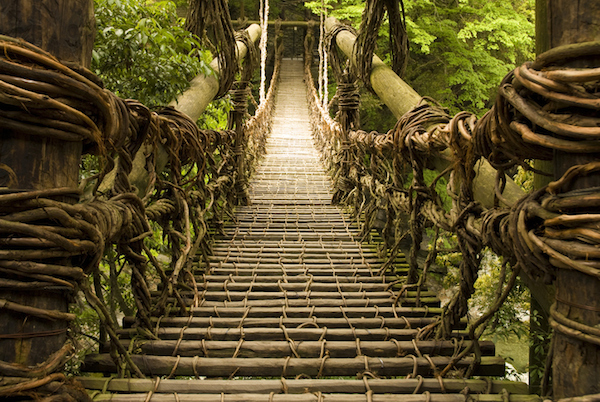 —
There are certain milestones in life that cause us to make shifts in ideology and how we perceive the world. We’re walking along just fine and suddenly a deep chasm cracks open right in front of us and we’re pushed across by something far stronger and swifter than our own volition.

someone like me who writes his spiritual life down on digital paper for all to see (on a daily basis), these shifts are even more jarring than for those who keep their thoughts more private.

When a paradigm shift such as this — also called a ‘conversion experience’ — happens, there is no going back. You’re spiritually being thrust over a chasm and jumping back to the other side becomes impossible.

And so, as a personal blogger, when this happens to you, you have all of these people who really like your work. And then the chasm opens in front of you and you find yourself on the other side. Now, there’s this big gap between you and them.

It’s not that you’re better or more enlightened than them. You’re just standing on a different ground than you were before.

This happened to me a little over a year ago. See, this blog was based on non-religious spirituality for its first three years. That’s the subject matter that the audience was formed around. And then, I sat in an old Roman Catholic church a year and a half ago and unexpectedly had a conversion experience.

I’ve mentioned it before and I’ll continue to describe it as it comes more into view (conversion experiences take awhile to be able to explain, it seems). But it was a thought-reversal. Prior to that moment, I saw myself as the creator of my experience. I saw it as my job to mold my life how I wanted it using spirituality as my tool. This was the whole point.

But in that mass, the liturgy made me feel small again. Not in a demeaning way, but in a profoundly comforting and merciful way. I went from being the creator of my life to being the created. Immediately, my soul was able to rest and be shaped. I was finally able to let the grace of the divine have its way with me.
So there I was on the other side of the chasm from where I was the day before. I was a (gulp) Christian now. And I knew the baggage that the word brings. I railed against it for a large part of my life. Yesterday, I said that I didn’t think I was religiously wounded as a child, but I don’t know if any of us made it out of North American Christianity unscathed.

Anyhow, I was on one side of the chasm and my readers were on the other side. And there was no going back. It’s been hard seeing close readers from the early days of this blog leave and I’m overjoyed that new people continue to subscribe.

I’ve tried like crazy to build a bridge to where I am now, but here’s the problem with that… Sometimes, I feel led by the spirit in this work and it comes out in a graceful way. This is the work that I’m most proud of. But when I say that ‘I try’ to do this (build the bridge), it also means my ego gets involved. And when my ego gets involved, I start trying to convince you, dear reader, to come to my side. That’s when I come off as judging and condemning to the side I used to stand on so as to urge you to jump over the chasm that I was involuntarily pushed across.

I touched on something in the post that I wrote about turning 40 a couple of weeks ago and this gives me a reason to expand on it.
Here’s what I wrote…

I left the SBNR world and re-adopted a mainline Christian faith (albeit infused with a healthy amount of mysticism) a little over a year ago. Since then, I feel like I’ve been fighting against a lot of inner voices, particularly on this blog.

I’ve felt the need to fight against the SBNR world I just came out of (I just did it a few moments ago in this very article, actually).

I’ve felt the need to fight against what a lot of people (and I used to) think about what it means to be a Christian (aka: being a Bible-thumping, gun-gripping, immigrant-deporting, gay-bashing, anti-feminist, white male nationalist).

But as I move into my 40’s, I want to unclench my fists and spend what little time I have left in this world loving others and existing in a more simple, surrendered, and grace-centric space — as hard as it can be.

I don’t have anything against the SBNR world. I’m not going to eradicate all toxic Christianity from the world. And I have to accept and thank my conservative upbringing (some of it actually did serve me well).

What the hell am I doing here? My time here is short. I pray that I can breathe into that space more.

So this was my intention just a couple of short weeks ago. To realize that my time here is short and stop fighting against things. To just enjoy the grace that I’ve been bestowed with and share it with you from a warm heart.

ut I just got an email from a dear long-time reader/friend saying that I’ve been coming off as harsh and judgmental lately.

There it is, friends… The human condition playing out in true form. We know what we should do but we find it damn hard, if not impossible, to do it.

This reader made me aware of yet another Romans 7 moment. We all have them…

I don’t know what I’m doing, because I don’t do what I want to do. Instead, I do the thing that I hate.

I can’t remedy this on my own. I can’t build this bridge myself. When I try to do it, the bridge looks more like a weapon rather than a solid, inviting structure to walk across.

I do want to say this, for what it’s worth… If you’re religiously wounded, know that you don’t have to come back to religion. Ever.

I consider myself fortunate that I was welcomed back into the Christian fold in a loving way. It’s a blessing that I was able to see how the Christian faith wasn’t about the toxic stuff that I grew up with. I’m so thankful that I was shown a Christianity of grace and nonviolence.

ig hole inside of me was filled when the toxic religion of my childhood was healed and reconciled.

o I have a hard time not sharing this stuff in a passionate way. I’ve tried several times to go back to writing more secular pieces and I literally can’t do it. And now I’m on a path towards ministry in the Christian church. But I truly have nothing against those who identify as spiritual-but-not-religious. I’d even say that I still do, in a big way. Christianity is not solely about religion (in fact, I wrote this a couple of months ago and still stand by it).eligion is just an outward communal expression of Christianity. I think it’s an important one.

But if you only have access to a brand of religion that aims to harm you, you’re better off staying home and knowing God is every bit as present there as God is in the pews (or the auditorium seating of your local megachurch).

Today, I’m both spiritual AND religious because I’m privileged to live close to church people who follow the grace-fueled message of Christianity. If I hadn’t have moved here (following a ministerial path in the SBNR world, as it turned out), I may not have had my conversion experience. I’d have stayed comfortably on the other side of this chasm. And this last year and a half wouldn’t have been so… Interesting:)

It’s been a big cost, as a writer, this paradigm shift. But it’s one I’m thankful for. I know that many of the readers I lost were too wounded to be able to look at the C-word (Christian) and continue reading. And I don’t blame them for leaving.

What’s strange about my experience is that I was actually wounded by my SBNR experience. I’ll write about this more at length as soon as the words become more clear and less charged (prayers, please). But as God does her work on me, it still comes out in my words. I apologize if any of it has hurt you.

I pray that I can walk further ahead in grace and peace without the urge to convince anyone to leap across any chasm. Because that’s not my job. My job, as I see it, is to enjoy the unending love the divine has for me and try to share my story as I go along. May I never forget that we’re all one in Christ.

If I do this, I have to trust that the bridge will appear.