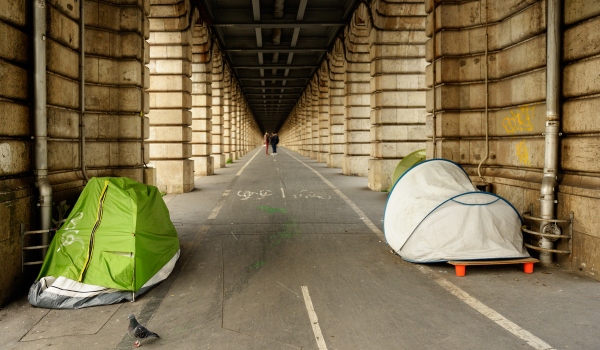 Tonight, an increasing number of Canadians face the prospect of sleeping in a tent — not to welcome the summer camping season, but as a last resort. Unlike regulated campgrounds, “tent cities” are without electricity, water and often bathrooms. These makeshift encampments appear to be on the rise with Winnipeg and Nanaimo being two recent examples of desperate people sharing large outdoor spaces that lack basic amenities.

These camps, as well as others in Canada and the United States, have drawn increased media and political attention, perhaps in part due to their prominent locations. For Winnipeg, the tent city is on the grounds of a church near the Provincial Legislature. In Nanaimo, the prospect of passenger ships welcomed by “homeless” campers appeared to raise eyebrows and ire in local media stories.

More important are pressing questions about what to do with such camps, including concerns over their legality — and the outright safety of inhabitants.

Many argue tent cities should close immediately for health and safety reasons alone. Others counter such acts further criminalize poverty with encampments merely a symptom of the deepening income inequality, the rise of poverty and homelessness felt across the country.

Regardless of the position taken, tent cities present difficult health and social policy challenges with no simple or single solution.

There is jurisdictional overlap when it comes to the enforcement of tent cities. What laws and bylaws should be brought to the fore? In Nanaimo, for example, the city cited the provincial trespass act in an attempt to force residents to vacate while activists charged that “tenters” had the right to remain under the Canadian Charter of Rights and Freedoms. The debate continues, but under imminent threat of enforcement.

Winnipeg’s tent city has placed All Saints Anglican Church at the centre of a debate on what to do about the situation. With the battle lines drawn, some called into question the safety and basic cleanliness of the camp or invoked a fear of crime. At the same time, social activists used Winnipeg’s camp as a symbol of the breakdown in the provision of affordable housing with a lack of tools to address poverty and addiction.

A pending wedding at the church saw campers voluntarily dismantle their community and move on, many with no formal plan for what would happen next.

The arguments playing out in Winnipeg and Nanaimo are very much the same as in San Francisco, Seattle, Victoria, Calgary, Edmonton, Toronto and countless other North American cities. Some camps have come and gone quietly, with others legally closed and dismantled — often by force, such as in Philadelphia. Research is showing a marked rise of encampments in the U.S. that may exceed 300 in 2018.

Do policy fixes hold the key for curbing tent cities and reducing homelessness?

After a year of consultation, the Canadian Homeless Partnering Strategy (HPS) has been renamed Reaching Home. The newly minted federal strategy will provide just over $2 billion over the next decade with the objective of cutting chronic homelessness in half. Importantly, they employ a rights-based strategy emphasizing that every Canadian has the right to adequate housing. The hope is that policies and the new initiative will focus on supports for people in crisis while building affordable long-term housing.

Perhaps we are coming full circle to the last major crisis that sparked federal support. It was in 1999, when a prominent tent city rose in Toronto’s prominent waterfront area. It was in the midst of that disaster when Jack Layton became a national hero, calling for change and help. Today we need a new champion to rise with Jack’s passion to address tent cities — and poverty more generally.

Evidence suggests the contributing factors to becoming homeless include prevalence of mental illness, addictions as well as poverty (to name only a few factors) and these issues need to be addressed. Using a harm reduction approach and offering a set of supports such as housing first, addictions treatment and expanded mental health programs is a good place to start.

Removing or banning tents or further criminalizing poverty will not solve the problem. We must focus on finding a more effective means to prevent homelessness from occurring in the first place.

This post was previously published on Evidencenetwork.ca/ and is republished here under a Creative Commons license CC BY-ND 4.0.