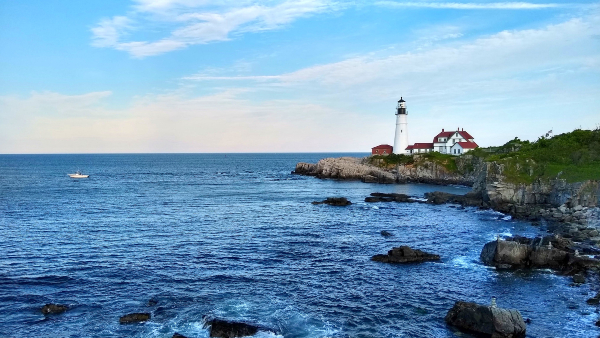 The Spaces That Connect Us

We have flown across the country before, and it is easy to disregard the land as it recedes behind the plane. Roadtripping the distance is different. You can’t ignore the long empty spaces as you spend countless hours staring at them through the windows. At best, you find ways of passing the time; we listened to audiobooks, podcasts, and music.

Some folks act as if America is overpopulated and ready to burst at the borders. It might feel that way in places like New York City, where my kids joked that there wasn’t enough oxygen for everyone. But that sense of density disappears as you pass into less-peopled locales — especially when your minivan is low on gas or somebody needs a toilet.

“We’ve seen a whole lot of nothing,” remarked my daughter somewhere in the green rolling hills of Vermont, and I agreed.

Why do we have all that nothing? Much of it produces our food. The diet of the nation demands more than 50% of our land be devoted to agriculture and livestock, including a lot of agriculture for livestock. At first, that percentage sounded impossible. It became easier to believe as we drove through it.

Along the way, I realized the word “rural” is poorly defined. In the Atlantic Northeast, rurality refers to people settled lightly across forests, mountains, and other landscapes of the older spirits. Farms are less common, smaller in acreage, and often focused on niche products or practices. That’s different from the Midwest, or the Palouse region of the Pacific Northwest. There, much rurality is due to industrialized agriculture mass-producing a few staple crops across millions of acres.

Both regions have a low population density and are full of plants. But the industrial farmland is so forcefully sculpted and groomed that, to me, it feels as manmade as any urban sprawl. Is it agricultural sprawl? If nothing else, it is evidence that ruralness ain’t the same everywhere.

In any case: my son noted halfway through Kansas corn country, “the Northeast basically needs the Midwest to be farmland,” and I think he’s right. It may be that the Northeast can only preserve its natural landscapes because it relies on others for food. And in return, the Midwest needs the Northeast to keep eating.

Regional differences tend to be polarized by the media and politicians, so we had to wonder: Would the nation be more unified if we understood how much our different parts depended upon each other?
—

This post is the third of 4 parts, the sum of which was previously published on Medium.

—
Photo © 2019 Tor de Vries: The coast of Maine was the logical midpoint of our trip, which included a stop at Portland Head Light: the most photographed lighthouse in America.