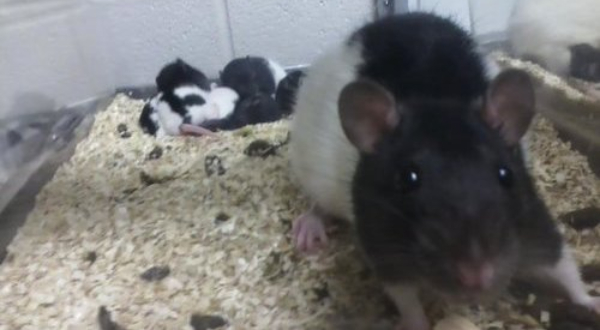 How females are used as reproductive machines

When I was an undergrad at Ithaca College, I was awarded the opportunity to conduct an original research study over the summer of my Junior year. I was thrilled to have an opportunity that most undergrads don’t get that would look amazing on grad school applications, and I thought working in my school’s behavioral neuroscience lab with rats would be fun. But in reality, I had no idea what I was getting into and how horrible and traumatizing that experience would be (you can read more about that here).

Looking back on this experience six years later, now as a radical feminist, one thing stands out to me about the debate around animal testing that is often ignored: the reproductive rights of the female non-humans involved.

My work, in particular, focused on examining the effects of something called a “maternal separation protocol.” This was a method to induce in young rats a life experience comparable to early childhood trauma, such as parental neglect or abuse, so that we could study the impact of this experience on adulthood behaviors (alcoholism and aggression, for example). This protocol involved taking newly born pups away from their mothers for three hours a day and was obviously traumatic for the pups; that was the intention. But I was interested in studying the impact this protocol had on the collateral victims: the mothers. How did they feel about this separation? Was it just as traumatic for them?

Although I ended up leaving the lab before publishing my work, pilot studies demonstrated that yes, this separation was traumatic for the mothers as well. I did not need a data analysis to tell me this, though. Every day when I went to take the babies from their mothers they fought me, cried, and screamed as they watched their babies taken away from them. It was clear they did not want this.

While what we did to the all rats in this lab is clearly torture and unethical by any anti-speciesist standard, the particular oppression the female rats experienced was unique, and draws a direct parallel to how human women are controlled and abused for their ability to reproduce.

The primary test subjects in our lab were the male rats, so females were used purely as accessories and tools to achieve our end results. Most females started out being used as a mate for a male. This mating process prompted the male to become more aggressive when another male entered his territory – which made for strong statistical effects. The female was subjected to life in a lab “shoebox” with no freedom, play time, or socialization with anyone except her mate just so that her mate would become more aggressive. When she eventually became pregnant, her time under the microscope would commence.

We only bought rats once or twice from lab rat breeders to get us up and running. Otherwise, the lab was self sustaining. Despite the fact that we were regularly killing hundreds of rats, we kept breeding more and more – using the females like machines, getting them pregnant as soon as they were able. She, of course, had no choice in this process. Unlike in nature where she could more freely choose her mate, we randomly assigned mates and stuck them in the same shoebox together. She had nowhere to run or hide, and eventually the male would dominate her. The screeches of pain coming from the mating room made it clear that this was not a consensual act. If a female failed to reproduce in a reasonable amount of time, she was considered defective and would be killed.

When a litter was born, the male was removed from the box (male rats have been known to cannibalize their babies) and the maternal separation protocol would begin, with her babies becoming the next generation of subjects. If the pup was a male, he would go on to be one of the aggression test subjects. If she was female, she was doomed to the same fate as her mother before her.

Litters participating in the maternal separation protocol had to all be the same size, otherwise, there would be a confounding variable. Most rat litters ranged between 8-12 pups, so litters were “culled” down to six. This involved cutting the heads off of live newborns with scissors. Despite the fact that I was studying the impact of maternal separation on mothers, the impact of this culling process on maternal well-being was not considered at the time.

Most mothers were “euthanized” shortly after the study on her litter was complete, and the cycle would begin again with her female daughters.

These mothers were treated as baby-making machines, and a mere inconvenience to the primary research happening in the lab – collateral damage in the war on human trauma and aggression. Despite having to complete an Internal Review Board ethics audit prior to conducting this research, the effect of the forced mating, litter culling, and maternal separation protocol on the mother was never considered. Their pain was not only ignored but completely unnoticed as we focused on the male test subjects who would make up the numbers in our article.

Females of all species are oppressed for our ability to reproduce. This is the root cause of patriarchy and the not-so-hidden agenda behind misogyny. Although it’s much less straightforward, compulsory heterosexuality forced human women into mating and reproducing, as well, so that a male-dominated world can continue to have males to fight its wars and produce it’s labor. The girls are afterthoughts, doomed to follow the same oppressive cycle of her mother and grandmother before her.

Animal rights activists have long recognized the connection between feminism and the dairy and egg industries as these two industries clearly abuse the female reproductive systems. But beyond these more clear examples of female exploitation lie industry after industry built on the backs of females being used as reproductive machines. Vivisection is not the only field in which this exists.

Forced breeding happens everywhere non-humans are abused, from farms to pet stores. In human populations, forced breeding can also look like child marriage, lack of access to birth control or abortion, and cultural norms that pressure women into pregnancy. Perhaps examining how non-human females are used in this way can help us see past the straightforward misogyny of rape and workplace sexism to the root cause of patriarchy: female reproductive power.

This post was previously published on MaryKatefain and is republished here with a Creative Commons License.