Get Daily Email
Join/Login CLOSE
Home / Featured Content / We Are the Champions! 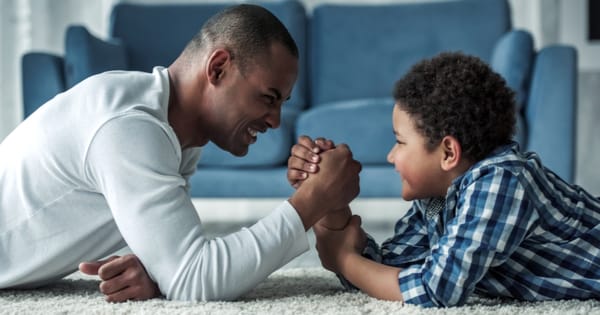 In January, my 2 and ½-year-old son Justin went back to daycare after being off for a week from Christmas Eve thru New Years.  To be perfectly blunt, the morning routine of getting him out of the house for the first few days was…less than pleasant.  Crying, kicking off of shoes, snotty noses. And don’t get me started on how Justin was acting.   He calms down once he arrives at daycare and sees his friends and teachers, but leaving the house was a nightmare because he naturally wants to stay home with me and the twins since that was the routine for over a week.

Also, as anyone who knows me knows, I am a blast to hang out with, so who can blame him for not wanting to leave?

This got me to thinking about Father/Son relationships now that I have 2 sons of my own.  My mom and dad have always told me that growing up I was stuck to my dad like glue, and when he left the room I would go searching for him like a lost puppy.  I could dispute these facts, but it was so long ago I will choose to believe as I am told.  When my dad comes over to see me (really to see the grandkids) he tells me the same story mainly because it further cements his feeling of being awesome.

So for all the fathers (and mothers) out there, cherish those times when your children don’t want to let you out of their site or even let go of you physically.  It may seem annoying when you feel like you need a crowbar to dislodge them from their car seat when they stiffen up like a piece of plywood in front of school as you attempt to get them without looking like an unfit parent to onlookers, but it is a beautiful thing to be loved on almost any level.

I hope there will not be a future where I can barely get a “Hello” from my kids or a hug, but I know it is a future that is possible.  I am doing my best to avoid that scenario daily! Lot of hugs, some limited Ipad time, and the occasional French fries or Munchkins as a treat can be amazing motivators.

This leads me into a “great” memory of growing up.

Many dads play sports with their kids.  Many dads enjoy defeating their kids at sports and rue the day when their son or daughter finally defeats them at backgammon or racketball (yes, those are the 2 examples I have.  I was a private school kid my whole life, and my other athletic skills were limited to middle school basketball, so leave me alone).  For me, I hated losing to my dad because of one thing: THE SONG.

Whenever he was victorious, which was often when I was young, he would stand up, shake his fist in the air as if rolling a pair of dice and sing his specially crafted victory song that I thought he had written just for me.  It features lyrics about how he would “always win in the end” and how there was “no time for losers” and being “the champion of the world”.  If you know music at all, you will already see where I am going with this.  He would hold each note as long as he could to make the song feel like an eternity.

My mom hated this.

When I was around 10 years old, I remember driving somewhere with my dad and the radio was on some rock station.  A song that I had never heard before came on that started, “I’ve paid my dues, Time after time, I’ve done my sentence, But committed no crime, And bad mistakes…”  Having never heard the song before, I had no idea the chorus to come:

I turned to my dad with my mouth hanging open.  He had been torturing me with a song by the classic rock band Queen.  Not even an original song.

I could not believe it.  All he could do was look at me and laugh.  The secret was out.  Needless to say, he sang the song a bit less, since I was in on the joke.  Also, I started beating him at sports as games a lot more, so maybe the song revelation was motivation for me.

We still laugh about it to this day, but I say this because I still feel close to my dad and he loves being a grandparent.  Still not very good at changing diapers, but makes a great wrestling buddy for my oldest son who attacks him the minute he lays down on the rug.  He was not a perfect dad, but none of us are perfect anythings (bad grammar I know).

But moments like those are the ones that stay with me and I hope I can make lots of good memories with my three.

coolminivandad (aka Vernon Gibbs II) is a stay-at-home dad living in the great state of NJ with his wife and 3 kids, 3 year-old boy/girl twins and a 5-year- old son. He is a tired Giants fan, a weary Knicks fan, and chooses Marvel over DC any day of the week. He loves to blog, draw, play the occasional video game when his kids are sleeping and occasionally make fun video with them for You Tube. In addition to writing for his own blog, he is a writer at Fathers of Multiples http://www.fathersofmultiples.com/ and has written for The Washington Post