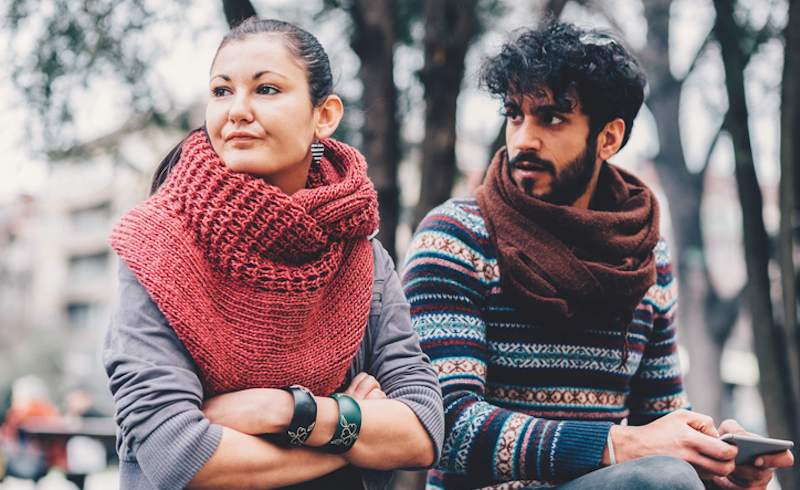 Yes, YOU are partly to blame.

I have a friend with a passive aggressive streak. In so many ways, she’s a great friend and colleague, and I love her. But then, seemingly out of nowhere, that savage streak — it strikes when least expected, and it makes my head spin for a moment before I recognize what’s up.

If you have relationships with someone — a friend, parent or partner — whose weapon of choice is a passive-aggressive remark or behavior, you’ll know what I’m talking about. Their comment hits you and, at first, it almost sounds logical, and maybe even justified, but then you realize you’re confused and strangely annoyed, and it all happened in a split second.

You think, “There’s something not right here. What is it? Wha-a-a-t?”

Stop for a moment, recognize the feeling, and take stock. The normal flow would have you just responding to them, doing what you figure they want you to do. You justify it by saying it’s easier that way. But it’s not and here are better ways to handle the situation.

Enabling them is simply making it easier for them to keep doing what they’re doing. You accommodate them or appease them by doing what they want, and you just became part of the very problem you hate. You’re now not only playing the passive-aggressive game, you signed up for the team.

The excuses, reasons, and justifications for passive-aggressive people are just under-handed ways to get you to do what they want you to do without really asking. They’re attempts to get the upper hand, wield some power over you, and get off scot-free themselves, taking no responsibility for what they want, what they are unwilling to provide, or for their part in the interaction.

Instead, he sets it up to make his partner offer to get up and turn off the darn light because he doesn’t want to. She often doesn’t know why his comment makes her cross, and it seems like such a petty thing anyway. So, she thinks, “Why not just do it? It’s not worth arguing about.”

But, when she stops to think about it, this behavior happens a lot, and in many different scenarios. She feels frustrated, but often hasn’t taken the time to realize that it’s a pattern, and it’s annoying, maddening, and crazy-making. It’s not a petty thing; it’s an example of passive aggressive manipulation.

If she accommodates it without assertiveness, she’s enabling the behavior. And that just ensures that it continues.

Here’s what you need to know about passive-aggressive behavior to keep it from driving you mad:

1. Passive aggressive behavior is sneaky, but in kind, honest ways.

What the passive-aggressive person says is not neutral. It’s charged with underlying anger, often in the form of resentment or entitlement that he or she may not even recognize, know about, or admit to. That anger is often hidden in the way they deliver their words. Sometimes served up while the person looks you straight in your eyes, defying you to make a fuss.

Other times, they arrive furtively, like throwaway remarks, with the hope that you will not react negatively.

When you do what they want, you get this duped feeling. You can’t quite bring yourself to say no, yet you feel like you’ve been had. Often, you can’t quite put your finger on why. It seems petty to make a fuss and let your feathers get ruffled. You justify it in your own mind with things like, “It won’t kill me to do it,” “They are not asking much,” or “Why make a fuss? It’s easier to just do it.”

Those moments of caving in to their behavior become a pattern. You repeatedly engage in playing the passive-aggressive game. And, you don’t like it.

2. Passive-aggressive behavior is about power. Keep it in balance.

When living or working with passive-aggressive people, just their passivity alone can make you feel bad about being assertive with them, especially if you don’t know better. That’s their ploy; they want to tip the power balance in their favor. They want to get you to do things, or feel things, or think things that allow them to feel like they “made” you do something.

And, at the same time, they want you to believe that you doing so had nothing to do with them at all. It’s all on you. (They got their way and yet are not responsible.)

You find yourself alone and upset at 9pm with no partner in sight. Finally, he arrives.

You: “What happened to coming home early to spend time together tonight?”
P-A: “Don’t you realize that my job is important and I can’t just get away when you want me to?”
You: “Why did you say you would, then?”
P-A: “You are unreasonable. I don’t think it is too much to ask to have a more understanding partner.”

See how the power shifted? First, they seem to share your desire to spend time together, so you think all is well. Then, the power shifts as the passive-aggressive behavior creates the emotional u-turn. In a New York second it magically shifts from them not taking responsibility for agreeing to coming home early, to you suddenly showing a lack of reason and understanding by even asking such a thing. That’s what leaves you second-guessing yourself and questioning your sanity.

3. It takes two to be passive-aggressive. Stop playing.

They ask, “Who’s going to get up and turn off the light?” and you respond, “I don’t know.”

This is an honest answer that offers the possibility for the asker to respond with a more direct question, or an assertive response. But, when you know there is a passive-aggressive pattern in your relationship, don’t expect an assertive response because assertiveness and passive-aggressiveness cannot occupy the same space. You may not even get a more direct question.

Because you don’t want to play the passive-aggressive game, another response might be, “I’m not,” or “Are you asking if I will turn off the light?”

This demonstrates that you’re not going to play.

It’s important to remove yourself from that passive-aggressive power game. You do that by being assertive and clear in your response. You may have to summon up some courage to start changing your responses, but it will save your sanity and demonstrate your unwillingness to continue playing.

Power games kill relationships. Sneaky behavior is dishonest. But remember, it take two to play the passive-aggressive game. When you quit playing, everything changes. These crazy-making patterns will only stop if you stop enabling them!

Rhoberta Shaler, PhD, The Relationship Help Doctor, has spent the past 30 years helping couples navigate challenging relationships. If you’re worried that your partner is passive-aggressive, don’t wait any longer to find out.  Take her free online Passive-Aggressive Checklist to determine how healthy (or unhealthy) your relationship is AND what you can do to fix things.

How To Get It On Like A Total Pro (According To Total Pros)
19 Playful And Super Sexy Texts To Keep Things HOT (You’re Welcome)
Are Your Astrology Signs Sexually Compatible?
21 “Dirty Talk” Phrases Guaranteed To Drive Your Partner Crazy
Awesome Collection Of Quotes For Any And All Occasions
Don’t like ads? Become a supporter and enjoy The Good Men Project ad free
Do you want to talk about how to have richer, more mindful, and enduring relationships?
Join like-minded individuals in The Good Men Project Community.
—

Facebook392Tweet1Pin1EmailShares394
wpDiscuz
Share this ArticleLike this article? Email it to a friend!
Email sent!