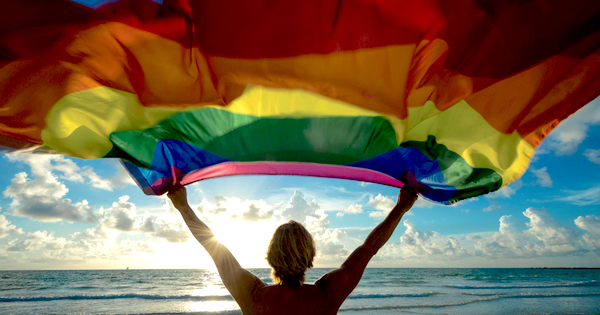 World Pride50 is here! Cities the world over are filled with colorful rainbows. LGBTQIA+ people are being given a nod of acceptance from Israel to Utah. Festive parades are filled with floats, from the smallest organizations to giant corporate sponsors. Businesses have rainbow flags in their windows. Clothing stores are filled with rainbow wear and restaurants serve rainbow desserts.

We have a gay man running for President of the United States who is popular among straight people and even some conservatives. Gay marriage is legal in all fifty states and in more and more countries all over the world, including religious strongholds such as Ireland.

Even the Mormons—the restrictive religion of my childhood—have changed their tune enough to promote “tolerance.” LGBTQIA+ characters and personalities are all over the media. Wow, what a shift!

So with all this progress, why do we still need to be “loud & proud”?

Why do we have to celebrate our differences and “put our sexuality in everyone’s face,” as my mother once said? Well, this is how I see it:

When I first discovered my sexuality back in Brigham City, Utah more than forty years ago, Anita Bryant was equating all gays to pedophiles (before her own son came out); and Harvey Milk, the first openly gay mayor, was assassinated. My religion and society shamed me daily with cruel language, which is still very real for many—both in America and in many parts of the world.

Each of us is shaped by societal norms. For my part, I modified my gay nature (in both senses of the word) to fit in. I intentionally became less “light in the loafers.” It was an act of sheer survival among bullies who were bred and sheltered by our religious and government establishments. The ultimate act of survival was to get out of Utah—a place where I was made to feel such intense shame. And I did, as soon as I graduated from the University.

I came of age and began exploring my sexuality in the early 80s in my new home in NYC, surrounded by a tight-knit theater community. At the age of 24, I wound up at the epicenter of a cruel “plague” that ravished people just like me. As a performer, I would do a show, leave the stage, then go to funerals for my fellow gypsies. By the age of 27, I was nursing my own boyfriend to the grave.

I watched as many of my lovers, friends and comrades died—as so many soldiers experience in times of war—only mine died in shame. Some were buried in a mass grave, unclaimed by family, no fanfare and no mention, only a spot on a giant AIDS quilt. All the while, the government sat silent. As openly gay men, we felt an even deeper hatred and discrimination toward us. Once again I had to fight hard just to survive.

I became the change I wanted to see by living out loud.

I joined ACT UP—a group that staged bold, in-your-face protests, the only way we felt we could finally raise some awareness to what was happening. We went to Washington DC to march.

My immediate family back in Utah was pulled into the drama and stood by me, but they were oddly quiet politically during these years. They were overwhelmed by the gravity of it all and confused by how it made them face their own values. The first community I ever knew was content to see me and my friends die.

I continually worked to nurture self love even when I didn’t feel it from the outside. I lived my life more fervently, as if I had less time to leave behind a legacy, as if I may not see tomorrow.

The stigma in my immediate world in NYC is mostly gone now, and jeers are few and far between. But they do happen. Personally, I am in some sense still trying to sort out the effects of being a societal “outcast” for so many years. From the time I came out those decades ago, I have often affected a demeanor that would, I hoped, allow me to “pass” as straight. It felt, again, like a matter of survival.

Deep-seated shame and self loathing may not be immediately evident, but they have emerged in subtle ways that can be extremely self defeating. I am also working, still today, to relax those norms. 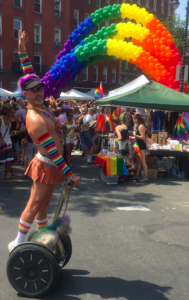 The author, loud and proud.

Now that I am grown and have had enough life experience (and therapy) to reflect upon, I feel like I’m better positioned to relay wisdom as an “elder” in my community. So what does pride mean to me? Why do I still celebrate PRIDE?

First of all, I am proud to have survived, when so many of my brothers did not. I am proud to be able to stand tall and say I was on the battle lines by speaking my truth. I left behind the label of “sissy” and became a “warrior” battling against discrimination not just for myself and my generation, but also for the next.

I am proud to be part of a community that refuses to hide and play small, despite being marginalized. We are mighty!

And I am proud to be able to move past self-imposed shame and celebrate my unique differences.

But Pride50 is more than that. We get to celebrate not only the progress we accomplished alone, but also together. We also get to honor pioneers and allies: from Bayard Rustin, Larry Kramer and Mart Crowley, to Ellen, Elizabeth Taylor and Judy Garland, from Edie Windsor and James Baldwin to Gore Vidal and Judith Light, from Marsha P. Johnson, to RuPaul, Madonna, President Obama and Lady Gaga, and so many more.

When we march in the parade we also honor the tragedy of so many gay youth who have committed suicide, the brutally tortured such as Matthew Shepard, and martyrs like the hundreds of thousands of gays who died of AIDS. When we march we get to stand up for those of our community who still live in oppressed societies—places where one can be hung for being gay.

For many years, I would have given anything to be able to take a “straight pill.” It felt like life would have been so much easier. I yearned to be a father like my dad, to be a welcome part of my religion, my community and my family. But that wasn’t in the cards for me.

In life, hidden in the forces that pull us down is the energy to lift us up!

Being born gay imbued me with a different scenario than the rest of my family. What I once thought was a curse was actually a gift. I can say that now because, at last, I am happy. I feel blessed to live in a time during which I have been able to shape shift culture, a time when my actions count. 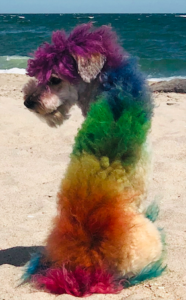 The dictionary defines the word “gay” as: carefree, cheerful, bright and showy. Finally, I can proudly say it is my true nature to live out the meaning of that word. It’s easy to forget who we are at our core, especially when we are in battle or survival mode. For my part, now, it doesn’t take much to tickle out the gayness that is who I truly am: carefree, cheerful, bright and showy.

Everyone—gay and straight—is welcome to join our party during Pride. When you see me there celebrating—in all the grandiosity I can—understand where it comes from. Give me a thumbs up, a nod, a smile. I do not need it to feel I am worthy. But even small endorsements acknowledge our combined struggle with discrimination.

With that, you become part of a larger movement toward justice and equality for ALL people, no matter their sexuality or gender identity. You become the A (for ally) in LGBTQIA+. Together, without judgment, we are all so very beautiful!

– Excerpted from the author’s forthcoming memoir.

Lead Photo Credit: lazyllama on Shutterstock. Other photos courtesy of the author.

END_OF_DOCUMENT_TOKEN_TO_BE_REPLACED

Facebook50Tweet1PinEmail1Shares52
wpDiscuz
Share this ArticleLike this article? Email it to a friend!
Email sent!