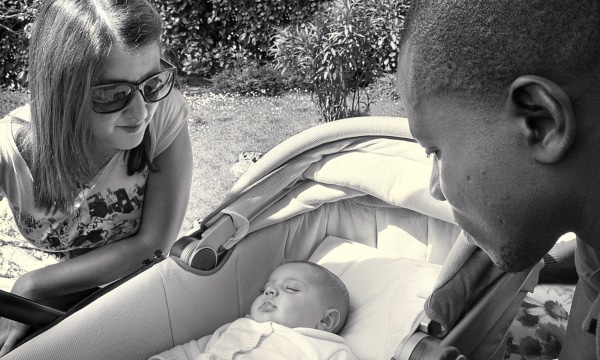 My 8-year-old son and I were running errands last weekend when during one stop, he uttered a lame joke. Because my lame sense of humor is to blame for his, I laughed aloud, patting him on the head and tousling his hair while we combed store shelves.

Within 10 meters of us were another half dozen sets of grown men and boys—presumably fathers and sons, other legal guardians and sons, uncles and nephews, maybe grandfathers and grandsons, etc.  An elderly man with a young boy in tow approached us, smiled magnanimously, and said to me, “You should be proud. You’re doing a fine job.”

He then walked away. That’s it. No climactic point to this story.

My son was curious. “You know that guy, dad?”

“Then why’d he say that to you? Was he just trying to be nice?”

“He might think he was trying to be nice.”

“He didn’t approach any of the other dads and boys, son.”

“Hey, you’re right! He came out of nowhere to us and then left! What’s up with that?”

It wasn’t complicated. I’m African American and self-conscious about my fatherhood in a country where the debunked myth that two-thirds to three-quarters of black children are born without fathers sill has legs. Without fathers? That’s a whole lot of immaculate conceptions. More accurately put, two-thirds or more are born to unwed parents. The myth is in the not-so-thinly veiled suggestion that black men, for lack of wedding bands, are not there for their children.

So let me tell you how the elderly man in the store reminded me of the worst attempts at compliments I’ve ever received — all some variation of “You’re doing well,” or, “Your parents must be proud.” For reasons I can’t be certain of but can certainly speculate on, it’s usually, “Your mother must be proud.”

When I was a kid, I didn’t mind. I usually heard those words in reference to my helping an elderly woman across the street or an elderly man carry grocery bags to his front door. Maybe it was mowing an elderly neighbor’s front lawn just because, since I was mowing my own, anyway. I mean, who wouldn’t compliment a pimply-faced, awkward kid who did that kind of stuff? Why wouldn’t my mother be proud?

My take on that particular compliment took a turn once I grew into that gray area between black boy and black man: old enough, tall enough, muscled enough, and in possession of a deep enough voice to hint at ambiguous maturity. He’s tall, he looks stern. Is he a boy? Is he a man? Regardless, let’s set a high behavioral and attitudinal bar for him rooted in assuming he’s older! If he’s a child and makes it, great! We’ll praise him for being mature beyond his years. If he’s grown and disappoints, well, he probably didn’t care enough or try hard enough!

It seemed that virtually overnight, I’d find myself walking out of the library with a stack of books tucked under my arm, surrounded by white students doing the exact same, and shoulder-tapped by some grinning stranger who wanted to let me know, “Your mother must be proud.”

I know it’s tempting to dismiss my gripe as a classic first-world problem and to dismiss me as a classic INFJ, unable to take a compliment. But with the exception of my boyhood lawnmowing exploits — seriously, I was a fiend with that mower; other kids rode bikes, and I did too; but I felt about mowers the way Forrest Gump felt about shrimp — in pretty much every other instance of “Your mother must be proud,” I’ve been surrounded by white people. And in pretty much every other instance, my complimenter singled me out and didn’t bother to compliment the others.

In that way, we feel indignation hours after a public insult because we didn’t think of a snappy comeback till too long after the fact, I’ve always wished I had the nerve to respond in the moment something like, “What? You’re not proud of (random adjacent white guy) too, or did you not notice him because you expect him to be a good dad (husband, boss, citizen, etc.)?”

I want my son to grow up to be a gracious teenager and young man, accomplished adult, good citizen, etc., but I struggle with this issue when he follows up with me to ask why these types of compliments make me uncomfortable.

“It’s fine to accept compliments, son,” is not enough.

I’ve raised my boy to be a critical thinker and to know that it’s not too early to consider strangers’ motivations.

I fear that if I tell him now that generations of low expectations born of obliviousness (or turning a blind eye) to a systemic lack of opportunity make these types of compliments backhanded, or actually insults, I’ll make him self-conscious about the “kindness” of strangers. But I think it may be more important to teach him not to feed those low expectations. Be civil and polite, son, but don’t ever let anyone treat you like your good behavior is an anomaly. Good behavior is normal and to be expected from you. That’s what I’ll tell him.

And you? If you’ve been that complimenter before, ask yourself if you would have given the same praise to any random white man in a crowd of white men. If the answer is no, then do me and every other black man in your orbit a favor: Expect from us no more or less than you would a white man you don’t know. I don’t need accolades for being a halfway decent dad among a crowd of halfway decent dads. You want to celebrate me? The best way to do it is to recognize I’m “normal” by minding your own business and keeping it moving—unless you just want to strike up a genuinely friendly conversation.
—

James Burnett is a public relations executive and former staff writer for The Miami Herald, The Boston Globe, and the Milwaukee Journal Sentinel. He lives in Wisconsin with his wife, children and black lab, Leo.

Facebook64Tweet2Pin1EmailShares67
wpDiscuz
Share this ArticleLike this article? Email it to a friend!
Email sent!