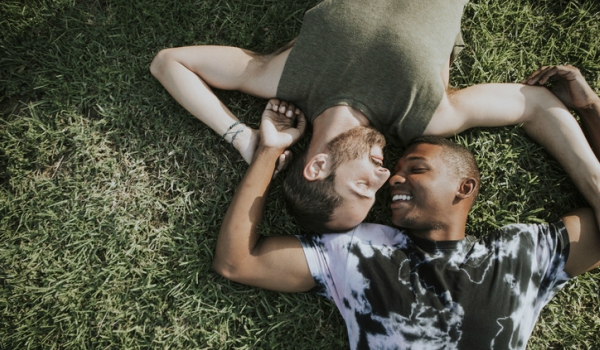 I am a mid-20s, gay male from [East Asia]. I have not come out. I have found the love of my life and he is in his mid-60s. I am from a higher caste than he is, but neither of us sees that as a problem. I think he considers me his son. I have met his family and they accept me. We speak to each other about very personal things, but we have never spoken about our love for each other or my being gay. I think he knows that I love him. I want to tell him that I love him, but I am afraid to for fear of losing this relationship. What do you think I should do?

Everything you’ve written points to the fact that you love this man and that he loves you. Although the words haven’t been spoken, your behavior toward each other suggests this is true. It now appears that you are at a turning point where you wish to take your relationship with him to another level. Is it time to say “I love you”?

As I have previously written, the English word for love has many different meanings depending upon who is the target of that love. If you tell this man that you love him, and he responds with “I love you too,” will your words mean the same thing? Or will a discrepancy or different expectation emerge? This situation has no guarantees.

I agree with Brené Brown, who in her TED Talk on vulnerability said that connection with other people is what gives our lives purpose and meaning. She went on to say, “In order for connection to happen, we have to allow ourselves to be seen, really seen.” In other words, to connect with someone intimately, we must make ourselves vulnerable, but the very definition of vulnerability means we run the risk of being emotionally damaged. Brown said that because we can’t numb our feelings selectively, we can’t numb vulnerability without also deadening joy and happiness too.

What are the risks? Your biggest fear seems to be that he will end the relationship, and this is one possibility. Perhaps you also fear that if he reciprocates by telling you he loves you, the two of you would then need to ask, Where do we go from here? The most painful response might be for him just to say “Thank you,” seemingly indifferent to the risks you’ve just taken.

The biggest question for you to ponder is this: What are my intentions? By attempting to take this relationship to a different level, what is it you want to happen? Sex? Exclusivity? A future together? Is being treated as his son not enough for you? Is it enough for him? Expressing your love for him may expose a discrepancy in your feelings for each other.

Several factors could influence his response to you. First, he is married, and he may not wish to risk disrupting his socially acceptable, more traditional relationship. His family also seems to accept you in that role. Will they still accept you if the relationship evolves into something else? Having you in his life as a “son” may be safer and more acceptable to him than having you as a lover.

The age difference between you two may be another of his concerns. As I’ve written before, many older men are incredulous that a younger man could love them. An intergenerational couple may not see their age difference as a problem, but family and friends may be suspicious that malevolent motives are involved. Since you are more financially secure than he is, they may feel like he is taking advantage of you.

Cultural factors might also influence his response. Although most societies have a hierarchy of social class, the caste system in East Asia may be somewhat more rigid than in other places. You know your culture better than I. How would these differences be perceived in a heterosexual relationship? That might give you a clue as to what you might expect. A related issue is worthiness. Is there a possibility that his being in a lower caste might cause him to feel unworthy of being loved by someone in a higher social class?

I recommend that you first come out to him as gay so you can explore his feelings about homosexuality. This will allow him to know you as you really are and expose any prejudices or stereotypes he might have about LGBTQ people. My guess is that he will not be surprised that you’re gay, but at least you have opened this topic for a more honest discussion. Once you have opened up this subject, the concerns about age, culture, and social class will likely flow into the discussion. In this way, you can avoid making the issue an entirely personal one. Will he still want you for a son if he knows the more authentic you? Is being a son enough for you?

After you’ve had this discussion, it will be easier to tell him that you love him, discuss whether you might have a future together, and find out what that future might look like.

This post was previously published on Lorenaolson.com and is republished here with permission from the author.

Facebook52TweetPinEmailShares52
wpDiscuz
Share this ArticleLike this article? Email it to a friend!
Email sent!