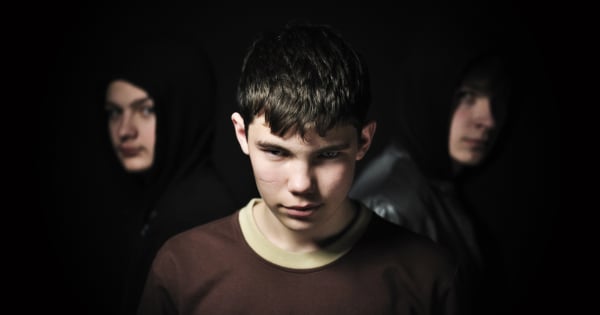 I was not a fighter when I was a boy, but fighting was often on my mind. Occasionally, before the first bell, all the disparate games on the paved playground of Summit Ave Elementary School ceased simultaneously as a swarm of kids encircled two boys squaring off, their bodies tense and their faces a mixture of rage and fear. Then it began: wild punches and kicks and then on the ground with more flailing blows until a teacher arrived or one of the boys gave in.

I tried to picture myself in a fight. I had no interest in hurting anyone, but what if one of the angry boys, the ones who seemed to prowl the playground on the lookout for something, who never seemed to rest, who never seemed happy—what if one of them decided I was part of whatever problem troubled their mind? What would I do? Would I really fight? I liked movies and television shows with action heroes, particularly David Carradine in Kung Fu. I wanted to be like Kwai Chang Caine, Carradine’s character, who was peaceful by nature, but if pushed, was lethal and fearless. Except in Kung Fu, the fighting seemed cool and athletic, nothing like the chaotic, sudden fury of the playground. Also, there were winners and losers on television, good guys and bad guys, but on the playground there were just two boys, and all I saw afterward was blood and tears and red faces and more threats.

One fall afternoon in fourth grade John Young and I were walking home together. I saw them first: three boys wearing the blue pants and white shirt and blue tie of Saint Raymond’s Catholic School. One of them had to be thirteen or fourteen, almost as tall as an adult, with bleached white hair and freckles. The front tail of his shirt was untucked and his tie was crooked.

“Don’t worry,” said John. “I know these guys.” John’s older brother went to Saint Raymond, I remembered with some relief, except the blond-haired boy was watching us as we approached. As soon John and I reached their corner, he raised his hand like a crossing guard and we stopped.

“Your gang want to fight our gang?”

I didn’t know how to answer. John and I weren’t a gang, and from the look of it, they weren’t a gang either. It all seemed like make believe, but then Blond Boy was on the move, and in two steps was behind me and putting me in a headlock. He was so much taller than I that his hold felt strangely parental. But it was happening. This was it. This was going to be a fight. What should I do?

That’s when, in my mind, I heard: Do nothing. I understood this to mean do absolutely nothing, don’t move or speak or resist. So I stood there, locked against him, doing nothing, knowing in the same way I knew how to pet my cats without eliciting a swipe, that I couldn’t give him anything to fight against.

In the next moment, he released me.

“Never mind,” he said. I turned and saw him walking away from me, head down, all his restless, street corner energy gone. The two other boys followed him.

For years afterward, I would return to that corner in my imagination. Every hero in every story I watched or read fought back against villains. Who is an older boy who picks a fight with a younger boy but a villain? I didn’t want to be a coward, and doing nothing seemed cowardly. So I would fight back in my imagination, would have somehow learned Kung Fu’s lethal choreography – but these fantasies never satisfied me. They left me with the same restlessness I sensed in the angry boys, as if that one fight wouldn’t be enough, as if I’d need another villain and another villain and another villain, just as Kwai Chang Caine managed to find every week.

Then when one summer evening when I was sixteen, I was on my way to my girlfriend’s house. She lived a little beyond where Summit Ave School used to stand, and so I followed the same path I used to walk when I was a kid going to school. Halfway to her house I came to the same corner, and looking up from my thoughts I saw him: the same bleach blond hair and the same freckles, only now he and I were the same height. He was riding a ten-speed bike, and he peddled over to me and asked if I had a cigarette. I didn’t. He began riding in a circle near me, asking what I was up to, where I was going. I told him I was going to see my girlfriend and this pleased him.

I kept wondering if he remembered me and that headlock. If he did, nothing in his face betrayed that. He just kept circling in on his bike, talking about girls now, and also cigarettes and some plan he had for how he would get cigarettes even though he had no money. I got the feeling that if I wanted, I could join him on his evening’s adventure, and that he and I could be become criminal friends. I had learned by this time that I knew how to be friends with just about anybody. It was a good skill to have, but one you had to employ strategically. So I told him I was sorry, that my girlfriend was expecting me. This pleased him again, and he gave me a wink and peddled off into the evening.

Funny, I thought as I watched him go, that I wasn’t scared of him at all. In fact, I couldn’t remember the last time I’d been scared of another boy. When did that happen? It felt like just yesterday that the threat of fighting hung over my daily life like a test I’d soon have to take. As I passed the parking lot that used to be Summit Ave School, I retraced the years in my mind, boy after boy after boy until I was at that corner again, doing nothing in the headlock, about to defeat the only villain I would ever know.
—