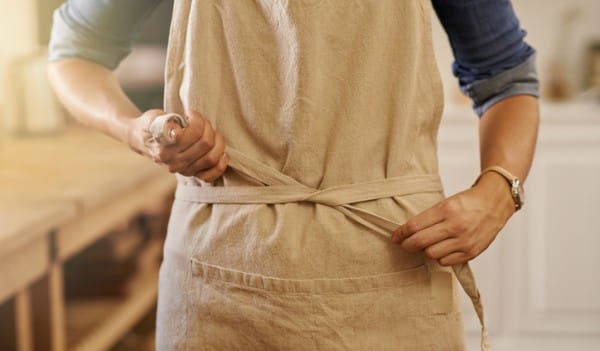 I’ve been wearing the apron in my house for thirty-three years, and as you know, an apron is just a cape on backwards. The kitchen is where I danced to Toby Keith, sipped cheap chardonnay, and fantasied about turning a pig’s butt into a Julia Child’s worthy meal. In the early years, cooking was more of an experiment than a skill, but I kept at it, and I would like to think there were signs of improvement (fewer fire alarms and leftovers). It’s been a blessing and a curse but mostly a privilege. Not to get overly sentimental, but nurturing my family is how I showed my love, well that, and my renowned Easter Baskets.

I think food tastes better when created with love; when my mood was off, so was the pot roast. The meals as well as our lives fell into this comfortable pattern, as I’ve mentioned before, I’m not big on change, so I had an iron-clad food schedule.  It was biblical, Godly, a ritual recipe for each day of the week. We had chicken on Monday, tacos on Tuesdays, pasta on Wednesday, and pork roast on Thursday, but Friday was my day of rest. I do not cook on Friday, it’s my sabbath, in fact I do not even think about food on Friday, because that would be a sin. This was a well established and heavily publicized practice, one that Larry never fully embraced.

Every Friday, without fail, he would say, “What are we doing for dinner?”

“Honey, you know I don’t cook on Friday.”

“Maybe I should order a pizza?”

“I have no thoughts (not to be taken literally).”

I’d get the look.

I’d give the look.

One day I looked around and the children were gone, the leftovers started stacking up in the refrigerator, and no one came into the kitchen asking, “what’s for dinner mom?” (The family joke that I don’t find particularly funny.) It was one of those illuminating moments, when you notice the child who once sat in your lap, has a child of her own. Change can be so incrementally slow as to be unnoticeable, one morning you wake up, and scream, “What the hell happened here?” I haven’t figured out how to cook for two, it’s an implausible reality, because truthfully I don’t like what it represents. An empty nest.

I don’t like the term “empty nesters.” I prefer “parents of free range adults.” Robin Fox

I’ll admit, wearing the cape backwards was my only superpower, but I’m open to the idea of taking on an apprentice. Larry and I decided to give one of those food services a try, the ingredients come right to your front door, packed in a cold storage box, and since I’m having trouble adjusting my food shopping practices this is a dream come true. The name of the service is called Blue Apron. (I hope you laughing with me, not at me?) If you want to give it a try, call me, I have a ton of free meals saved up.

You choose the number of people to be served, the number of meals you want to receive each week, along with a few dietary options. The ingredients are fresh, laminated recipe cards are enclosed, and all you have to supply is the olive oil. There are no leftovers with this service, because the food is good, and the portions are controlled. We consider this a benefit at our age. It takes about 30 minutes to prep a meal.

When mothers talk about the depression of the empty nest, they’re not mourning the passing of all those wet towels on the floor, or the music that numbs your teeth, or even the bottle of capless shampoo dribbling down the shower drain. They’re upset because they’ve gone from supervisor of a child’s life to a spectator. It’s like being the vice president of the United States.

We open our box each week with great anticipation, as if Christmas became a weekly event, than we pop a bottle of wine while cleaning and chopping the produce. Before I knew what was happening I noticed Larry was wearing an apron. It was fun cooking together, like a hot kitchen tango, he seared the meat, I roasted the potatoes, and all was well for a while.

It reminded me of the time I taught Larry how to snow ski, within the span of two days, his skills surpassed my own. As my time became consumed with caring for my mom, Larry started prepping the meals on his own, so we could eat when I got home. And just like that I hung up my cape. Now I sip wine and blog while he crushes it in the kitchen. I’m a little nostalgic about my cape hanging on the fire extinguisher next to the refrigerator, useless, tattered, beloved, because deep down I want to be useful.

I have enjoyed greatly the second blooming that comes when you finish the life of the emotions and of personal relations; and suddenly find – at the age of fifty, say – that a whole new life has opened before you, filled with things you can think about, study, or read about…It is as if a fresh sap of ideas and thoughts was rising in you.

Larry cooks like he lives, aggressively, the fire alarm goes off at least once a week, and he’s already gone through three peelers. He also lacks my strict sense of order. I was counseling (ragging) him on placement of kitchen utensils the other day, I believe everything has a home, and that is where it belongs. You’d understand this better if you knew my Mother.

Larry is more casual about organization until he needs something. As you can imagine, he responded beautifully to my nagging, I had to abruptly leave the kitchen when he started blaming me for his catastrophic mood swing. Bill Pronzini says, “Men have mood swings. Women have mood leaps, mood swirls, mood loop-de-loops,” but he exaggerates. Thirty minutes later Larry found me pouting in my room. He handed me a beautiful plate of risotto with a rather smug expression on his face.

Reaching for the plate, I remain stoic, until he said, “You’re welcome (elevating the second syllables of each word),” and walked out of the room. Rude.

I said to his departing back, “Apology accepted.”

We are currently in a total stalemate and the only piece moving is the king. He will not admit that an orderly kitchen is not only important but a moral issue, it says so in Corinthians, “that everything should be done in a fitting and orderly way,” (yes I taped the verse to the refrigerator) so just to be ornery I now put everything in random places. Makes him crazy when he has to hunt around for ten minutes to find the cutting boards that ended up in the oven, or measuring cups mixed in with the wine glasses, and the pots with the tupperware.

Oh I know what you’re thinking, and your right, it’s absolutely ingenious, and oh so satisfying. I plan on continuing this deviant behavior until a proper apology is made. So basically our kitchen will be in disarray until one of us dies. “This is not the woman I married,” he says hoping to guilt me into submission. I say to the man in the flour dusted apron, “vous récoltez ce que nous semez.” (you reap what you sow)

I’ve heard things can get interesting after the kids leave but I never expected Larry would be wearing the apron and I would be keeping a disordered kitchen.

Leave a few kitchen tips in the comments for Larry, he’ll be so grateful…

This post was previously published on Living in the Gap and is republished here with permission from the author.

FacebookTweet4Pin100EmailShares104
wpDiscuz
Share this ArticleLike this article? Email it to a friend!
Email sent!