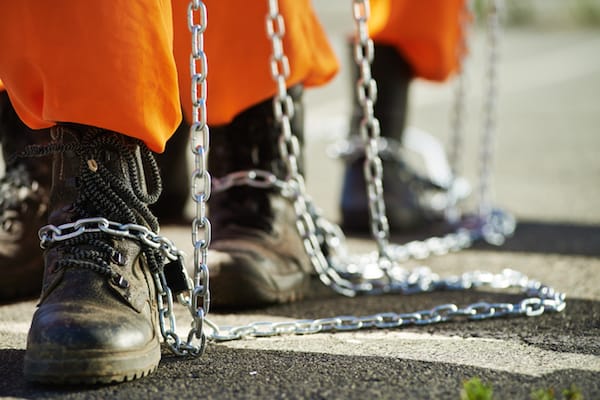 The call came in the fall of 2013. It was an inmate on his cellphone. He was inside a Mississippi prison, and he had something to tell me.

I waited for the words that I thought would come next. Perhaps he would share the details of the conviction that led to his time there. Or insist he had been railroaded. Or mistreated.

Instead, he wanted to explain to me all the corruption that was going on inside the prison.

I was intrigued, and my colleagues and I at the Clarion Ledger began a 13-month investigation into Mississippi prisons.

In the days that followed, he continued to call, reporting on what was happening inside the prison, sometimes giving me a play-by-play.

“We’re supposed to be on lockdown, and there are guys [fellow inmates] walking around with samurai swords — 3- or 4-foot swords,” he told me. “We’re living in a Martin Scorsese movie.”

He and other inmates sent me pictures of the weapons and other scenes from inside prison. Some showed walls that inmates had ripped out to remove reinforcing steel.

“Why would they do that?” I asked.

“For weapons,” he explained.

Another time he called from prison and said, “You hear that?”

He explained that it was metal striking metal as gang members made weapons.

He connected me with other inmates, who detailed how they said they bribed correctional officers to bring in contraband.

I also talked with families of inmates who had been extorted for thousands of dollars by gangs vowing to harm their loved ones if the families didn’t pay.

My colleagues and I exposed a Mississippi correctional system where gangs ruled, where corruption festered and where prison served as a “college of criminality.”

Ten days after our last story ran, then-Mississippi Corrections Commissioner Chris Epps was charged in a 49-count federal indictment, the result of an FBI corruption probe.

In the wake of this, Gov. Phil Bryant replaced Epps with longtime law enforcement officer Marshall Fisher to clean up what was happening.

State officials tore up more than $868 million in contracts that may have been tainted by corruption, and the task force concluded in its report that “corruption at the lowest levels creates a culture that invites corruption through the [Mississippi Department of Corrections] system.”

In 2017, Fisher’s assistant, Pelicia Hall, took his place as commissioner and vowed to continue the corruption cleanup.

He forfeited his investment and bank accounts, his $310,000 home in the Jackson suburb of Flowood, a $237,601 condo on the Mississippi Gulf Coast and two Mercedes-Benz vehicles to satisfy a nearly $1.3 million judgment.

His imprisonment closed a chapter, but the story hardly ends there.

Back in 2014, after my series in the Clarion Ledger ran, the Mississippi Legislature passed and the governor signed legislation aimed at reforming corrections and reducing the prison population, which Pew Charitable Trusts predicted would save the state $266 million by 2024.

There were savings all right, but all of them went back into the general fund. Meanwhile, the Legislature has slashed more than $185 million in total from the Corrections Department’s budget over the last five years.

After these cuts, Mississippi’s prisons now have fewer than half as many correctional officers as in 2014 with about the same number of inmates behind bars.

Fewer officers mean fewer eyes on what happens inside prisons as well as putting the remaining officers in jeopardy, experts say.

Since 2014, inmates and their families have continued to reach out to me. So have correctional officers, who say they fear for their lives.

They’ve told me about gangs and horrible conditions. Delayed medical care. Corruption. Prisons without heat. Unchecked violence. Lockdowns that have kept inmates behind bars for months — and have blocked them from communicating with their families.

What they have told me is that the conditions inside Mississippi prisons now are worse than they were in 2014.

After one inmate survived a stabbing, his wife reached out to me.

“Take any man or animal, put them in such conditions eventually they become hungry, nasty, lonely, enraged, out of control, emotionally unstable and uncaring bloodthirsty beast that’s only thought is survival, kill or be killed,” she wrote. “Then they throw them back on the outside to a judgmental society and expect them to function as if that nightmare never happened.”

An inmate stabbed an officer more than a dozen times at the Mississippi State Penitentiary at Parchman in November. On April 3, inmates attacked another officer at the privately run Marshall County Correctional Facility in Holly Springs, and the prison was set on fire.

“You have very dangerous inmates,” some of them serving life without parole sentences, a former officer told me, “and they know nothing can be done to them, so they don’t respect the staff.”

For these reasons, the Mississippi Center for Investigative Reporting and ProPublica are spending this year investigating the state’s corrections system. Our first story explores how the 2014 reforms have faltered, despite national praise from President Donald Trump and others.

We’re interested in talking with those who have been in prison, those who work for prisons and families that have been affected by the system. We want to hear from those who are working to make a difference in corrections.

The more people we can talk to, the more we can learn about a system that costs Mississippi taxpayers nearly $1 million a day.

ProPublica is a Pulitzer Prize-winning investigative newsroom. Sign up for The Big Story newsletter to receive stories like this one in your inbox.