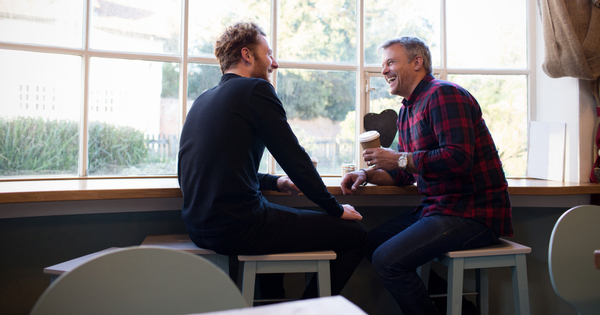 In October of 2016, I flew to New York City for a coach training weekend. I landed at LaGuardia and found my way out of that mess of an airport.

And honestly, I needed a drink.

I checked in on Facebook from the airport with a message that read something like “Here we go again. Waiting on my taxi.” I always looked forward to our weekends because I was able to get out of South Alabama, and I also was able to reconnect with some of my favorite members of the human race – my beautiful Accomplishment Coaching family.

I’m standing out in the taxi line and there was a bit of a nip in the air. It was October after all, so fall was in full swing.

I’m standing there maybe 20 minutes when I get a call from my friend and teammate Shana.

“Cancel your taxi. I’m driving right by there and I can pick you up and take you to your hotel.” A beautiful gesture from a beautiful soul.

Speaking of; Shana, if you’re reading this, I’d love to reconnect. I miss you.

We had a lovely conversation as we drove from Queens to my hotel in the Financial District in Lower Manhattan. We spoke about coaching and life. We made jokes about our teammates and the other coaches in the program.

It was a lovely conversation.

During the ride, I look over at her, and she’s got a worried look on her face.

“I think I missed my turn,” she says. The next thing she did was something that will connect us for the rest of our lives.

Keep in mind, it’s late evening on a Friday in October. Traffic wasn’t bad, but it’s still New York City. And at the time I was living in a city where the main road is a 13-mile long circle.

What Shana did was make a U-Turn across six lanes on Water Street in Downtown Manhattan. To her defense, there was no traffic. But still, this maneuver did something to me that I can’t quite describe. It may have involved soiled underwear. I can neither confirm nor deny this.

The human race is like a giant jigsaw puzzle. We all fit in whether we like it or not. But the more we face and accept the fact that we’re all lost souls swimming in the same fishbowl, year after year, the sooner we can accept our piece in the puzzle.

These people are your soul tribe.

Last week, I had a beautiful dinner with some friends I have written about before. Two of whom drove out to Stamford from the Bronx, and one of whom took the train from New York City.

It was a beautiful time and we bonded on a level I haven’t felt in many years.

I referenced that iconic Pink Floyd line earlier in this piece. And so many of the songs that they wrote and recorded over the years were about human connection.

One of their best was a sprawling epic of a song that’s less rock song and more rock and roll symphony. The song is called Shine On You Crazy Diamond. As much as I love David Gilmour’s guitar solos in songs like Comfortably Numb, Shine I believe features the four most famous notes he ever played.

There’s a long droning keyboard introduction that lasts several minutes. This is all before those four notes…

The song was written primarily by Gilmour about a man named Syd Barrett. Barrett was one of the original founding members of Pink Floyd and their original lead guitarist and lead vocalist. And he wrote some of their best early songs.

But Barrett – to be frank – he lost his mind. He was heavy into LSD and this along with suspected mental illness led him to be ousted from the band and replaced by Gilmour.

The remaining band members always admired Barrett’s creativity and his guitar skills. While he faded into the back of the room for a while – eventually leaving the music business for good in the mid 70s – he remained deeply connected with his former bandmates.

Barrett was part of the Pink Floyd soul tribe. And remained so until he died in 2006.

Even though I haven’t spoken with Shana in over a year, she’s still part of my soul tribe.

A soul tribe isn’t something I’ve always had. In fact, this is a relatively new experience for me.

I’ll never forget this. I was in my senior year of high school and I would eat lunch alone. I did this every day until the day the uber adorable head cheerleader came to my table and invited me to the cool kids’ table.

I didn’t think I deserved it, but I accepted.

Two weeks later, that table was empty yet again.

Ryan Hall was a lone wolf! And dang it, it was going to stay that way!

I love my soul tribe.

My soul tribe has helped me navigate some terrifying waters as of late. Dealing with my sister going through cancer treatment over a thousand miles away, my eviction and living situation, my money woes – they’ve helped me through a lot.

And I wouldn’t have been able to survive this year without them.

My challenge for you is to look at the people in your life. And see who your soul tribe is.

Life is way too short for lost souls in fishbowls.
—