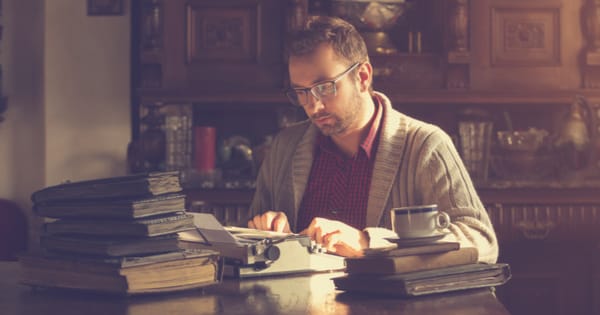 I’m closing in on finishing another novel. It’ll round out right around 100,000 words. By the time I’m done editing it, if I do it right, I’ll have it whittled down to 90,000. This will be the eighth novel I’ve completed, and each one of them has been around the same length. Tally it up, and that’s over 800,000 words. Not to mention the sixty columns and the 100-ish short stories I’ve written in the last three years.

That’s a lot of words.

Of those eight novels, not a single one has been published. The fourth one might be getting close, as it’s currently making the rounds with a few of the larger publishing houses in NYC. But still, I’ve never published a novel.

If you tally all those words up, you’ll get over a million. And of those million words, I’ve been paid pennies for only some of them. For the majority, I’ve made nothing. There are files upon files in my computer filled with words I spent hours writing but will never see the light of day. They’re just not good enough.

Maybe the same is true for me; maybe I’m just not good enough.

Maybe I’ll have pulled all this time away from my family, all these hours closed off in a dark room by myself, writing words no one will ever read, and in the end, I simply won’t be good enough.

This is a concern of mine. The only thing that seems to squelch that fear is working harder, working more.

I can trace this line of thinking back to my football days. The discipline of the gridiron was instilled in me at an early age. There was a game in eighth grade where I was running over a hundred-degree fever on game day, but I played that night anyway. There were hits I took, hard ones, when I got back up and stumbled into the huddle. There were loses. More loses than there were wins.

And every one of those moments taught me a lesson.

In the shower a few nights ago, after I’d received yet another rejection from yet another one of my writing projects, I thought back to my parents’ decision to let play in that game in eighth grade. The game when I had the fever.

Moms and Dads these days might balk at such a choice, and that’s what I was thinking in the shower: What would I do if it were my kid? But then I remembered the grind I was up against in my writing world. The hundreds of rejections I’d received over the years. The quiet strength it takes to rise at five a.m. every morning, drag myself out of bed, into my office, and write thousands of words that may never be read by anyone.

It’s a lot like playing with a high fever.

Football taught me how to show up. Period. Regardless of the circumstances, or the pain, “Do your job, son, and do it well.” I can hear my father’s voice in the morning. My mom cheering from the stands.

And here’s the kicker: I never made it to the NFL. All those sticky-hot practices in the dog days of summer didn’t add up to a million-dollar contract. And maybe my words won’t translate into dollars and cents, either. But I do know one thing: I love writing.

The way my pen feels on the paper. How twenty-six letters can form words, words sentences, and bring me to my knees or send my imagination soaring.

Deep down I love the grind, and the cool thing is, the words add up, just like all those passes thrown in years gone past. And whether or not I make it to the “Big Leagues” matters less than whether or not I just keep going.

The same is true for you.