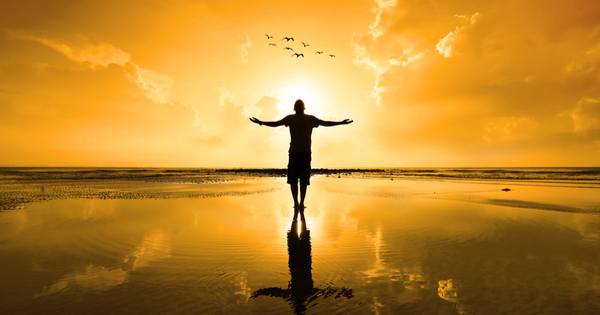 “Well, danger on the rocks is surely past,

Still I remain tied to the mast.

Could it be that I have found my home at last?”

This week on the Good Men Project, I’m going to share a really personal story. But a story that saved not only MY life, but it could save the life of someone you love.

It was the date I chose to start living my life as if I’m alive.

That was the date I was released from my time in room 274 of Southeast Alabama Medical Center in Dothan, Alabama (now known as Southeast Health.) I hadn’t ventured outside the building in a solid week. And I’d also eaten very little actual food in the past week.

Back to this date at the end of this article…

If I recall, it was a Friday night. In those days, I wasn’t nearly the bon vivant and man about town that I am now. In fact, I was practically a hermit.

I got off from work at 5 and went home. I ate leftovers and got online to see what movies were playing. I just needed something to kill a couple of hours on a Friday night in July.

As I’m driving home, I grew violently sick. I had to pull over to relieve myself…I’ll leave this to your imagination.

Several hours later, I was feeling no better. I picked up my phone and made the scariest phone call I’ve ever made up until that point.

Six hours later, I was well medicated but was no better. I was given instruction to go back to my primary doctor if I got no better.

That was one helluva long weekend, let me tell you.

That Monday morning, I went to my primary care doctor. They ordered an ultrasound at the hospital and a whole bunch of blood work. My white blood cell count was elevated. And the ultrasound determined what I and my doctors were concerned about.

My gallbladder had to go.

I was scheduled for surgery the next day. I checked into room 274 and tried to mentally prepare myself for this.

Normally, this kind of surgery is done laparoscopically which is minimally invasive. More than likely, I could have gone home the next day.

Keep this in mind, this was six months after losing my mom.

The next thing I remember after coming to following my surgery was an incredible pain in my belly. I had maybe 30 staples holding together about a 10” incision. And I was on a morphine drip.

The next day – or it could’ve been later that day, that week was one total blur – my doctor came in. I’ll never forget the hair this man had…but that’s beside the point.

“Ryan, there was a complication during your surgery…” Here’s what happened. My gallbladder wasn’t just infected, but it was necrotic. It had developed gangrene and had ruptured. Dr. Carpenter added, “Just so you know, the mortality rate from something like this is close to 65%.” I may not remember that figure exactly, but it was high. 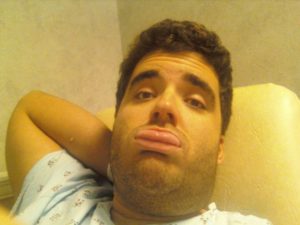 In other words, they had to call an audible in the operating room to possibly save my life.

After the doctor and the nurses left the room, I looked up at the ceiling tiles of room 274. One of the tiles was off-center and wasn’t seated in the grid correctly.

It was slightly out of alignment…

I stared at that f****** tile for what was either 2 minutes or 2 hours (I was high on morphine at the time and that week was a blur.)

After I got all the emotion out and I was able to think clearly, something really beautiful happened.

I heard a voice. It was a male voice that I didn’t recognize. God perhaps?

The voice gave me a pretty important instruction.

However, I did choose to live my life.

Since my emergency surgery, here’s just a small snippet of what I’ve done with my life.

This list is highly abridged, but I hope you get the point.

I took one of the scariest points in my life and I used it to start living my life as if I’m alive.

I’m being wheeled down a glass-lined corridor. This same corridor I believed I walked alone after my Mom passed the previous February.

The South Alabama sun was angry that July afternoon. But it was also the first time the sun had touched my skin in over a week.

Right before we reach the front door where my Dad’s truck was waiting, there was this old fella sitting on a park bench. He smiles at me a warm but weathered smile.

“I sure am. Been in here six days and I’m glad to be going home.”

“Must be nice. At least you have your health.”

In the past ten years, I don’t think I’ve ever shared the story about the old man with anyone. But those six words bring everything to light in a really sobering but beautiful way to this day.

At least you have your health.

As long as your lungs can still draw a breath, there’s still a chance.

As long as your heart still pumps blood through your body, there’s still a chance.

As long as your brain can still function, there’s still a chance.

There’s still a chance to live a rich and powerful life. If you have your health and a little bit of love, your world is yours.