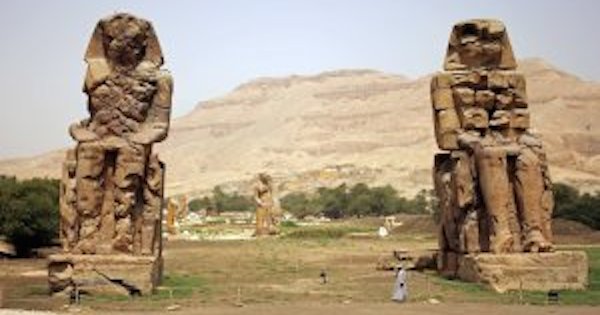 It was early morning and I had barely stepped out of the hotel when I was approached. I figured, Why not? It’ll be hot and with my current knee issue, I’d be limited to walking long distances.

Hama (which means ‘Dove’ as opposed to the Turkish baths that I thought he was named for) walked us to the ferry which cost a whole Egyptian pound ($0.10 USD) and we headed over to the West Bank.

“West is the best,” he grinned, throwing lines that he probably uses a million times on foreigners.

This guy had a good vibe about him and he did shoo away anyone who thought of trying to hassle me. We chugged across the Nile and hopped in his car. First stop was a breakfast of falafel, my latest addiction.

And here in Egypt, they do it well.

“We’ll go to the Valley of the Kings,” he said, “and the Memnon monuments.”

Luxor means ‘The Palaces’ and on this site, the ancient city of Thebes was located. The amount of archaeology here is staggering and there are tons of shops where alabaster (quartz) is handcrafted into vases and other statues.

The Valley of the Kings runs along the smooth, asphalt road. Being penniless I didn’t go in so we U-turned and went to see some hot chicken soup… I mean, Hatshepsut’s temple, carved into the rock of the mountain-side. Hatshepsut was the fifth ruler of the 18th Dynasty. Being the daughter of Thutmose I and Queen Ahmose, she married her half-brother, Thutmose II, who already spawned a son, Thutmose III, by a minor wife.

When her husband died in 1479 B.C. his son was appointed heir. But the kid was just a kid so Hatshepsut was appointed regent and together they ruled until 1473 when she declared herself pharaoh.

The ancient Egyptians were quite progressive. They didn’t oppress women for the simple fact that they worshiped nature and not some never-proven-to-exist deity that reckons women need to be covered and shut down whenever they want to speak their minds.

And this is thousands of years ago (yet, we claim to be ‘evolved’). Ancient civilizations had some powerful female leaders. Queen Sheba, Cleopatra, Joan de Arc. What the hell happened to us?

Hatshepsut would dress in men’s attire and administer affairs of the nation with the full support of the high priest of Amun, Hapuseneb. When she built her temple at Deir el Bahari in Thebes, she decided to be the daughter of Amun. She disappeared in 1458 B.C. when Thutmose III, wishing to reclaim the throne, led a revolt. He had her shrines and statues mutilated.

Not easy keeping it in the family.

From there we cruised around to an alabaster shop that Hama’s friend, Ahmed, owned. I liked this guy cause he didn’t push to sell me anything. Simply said, “Welcome, my friend,” and explained the delicacies of creating a piece from alabaster.

Talk about your time saver. But then it kills off the tradition.

“First, we shape the piece we are working on. Then we wrap it in linen and bury it so we can carve a hole into it to

make the vase. Using a limestone rock we then smooth the sides and finally, we have a finished product.”

He held up an example to the sunlight.

“That’s pretty cool,” I said, impressed by the workmanship.

“The rocks are brought in from about 60 kilometers away in the desert. There are no roads so transport is by donkeys and camels.”

I never thought donkeys to be desert animals but since visiting Ethiopia I’ve come to respect these jack-asses a lot more.

He showed me around the store, the different pieces and the glow-in-the-dark ones.

Yeah, he began to talk about, “Good price,”s but he wasn’t pushy and I respected him for that and for not giving me the stink eye when I didn’t purchase anything. My souvenirs consist of memories, photos and my writings about what I’ve been through. Trinkets just aren’t my thing.

Especially as I have nowhere to put them.

We shook hands and then Hama drove us to the giant Colossi of Memnon, two huge statues of Pharaoh Amenhotep III, who reigned during the 18th Dynasty, sitting proud (they’re sitting statues) for the past 3,400 years. They’re 18 meters high and weigh around 720 tons.

The Colossi stand guard at the entrance to Amenhotep’s memorial temple, built during the pharaoh’s lifetime, regarded as the largest temple in its day. Amenhotep was worshiped as a god-on-earth both before and after his death.

Way back in 27 BCE, a huge earthquake shattered the statues, cracking one from the waist up, deforming the other (faces aren’t on it). Since that shaky day, people have claimed that the statues sing, usually an hour or two before sunrise.

Quite quickly this became a known wonder and word spread as far as Rome. Its emperors would come to visit and marvel at this phenomenon. Some attribute the sounds to the amount of tourists at the time, others think it’s the evaporation of the dew through the rocks. It’s said to bring good luck and fortune if you hear it. I didn’t. But if this sound did exist, it’s more likely to just be the wind blowing through the cracks, creating some sort of whistling song effect.

But I’m no scientist.

I was impressed by the sheer size of them but couldn’t help think why the need to build something so big of yourself? What’s wrong with a six-foot carving?

I ignored the stall holder trying to sell me a map of Egypt and paused to chat with some police who said they were musicians and complained at the lack of tourists. Indeed, the revolution has caused quite the downfall in tourism and the country has been hit hard economically.

The fact that it’s now under military rule probably doesn’t help either.

But it is safe.

Later that evening, after resting at Oasis Hotel, I took a walk to the mosque built on a church that was built on the remains of the peristyle court of Amenhotep III when I was courted by a young kid to take a ride on his horse ‘n’ buggy, locally known as caleche.

These guys are relentless. But the kid was asking for just five pounds ($0.50 USD) to, “Feed my horse.” He offered to take me to some market and then Karnak. I wasn’t interested in the market but I went along with it.

“To Karnak is 20 pounds,” the kid turned from the front.

“Woah, buddy,” I sighed, knowing this would happen. “You said five pounds for the market, the temple and Karnak. You said the word, Karnak.”

“Then don’t mislead your clients,” I schooled him. I handed him the five pounds and walked off to see the Luxor Temple – Karnak.

Of course, I arrived and it was closed in preparation for the light and sound show presented hourly in four different languages. I walked back to the hotel, getting hassled by a calache driver who went from 20 pounds down to five to try and convince me to hop on.

I hit the hotel and packed my stuff for the morning’s trip to Hurghada, the seaside resort town on the Red Sea.