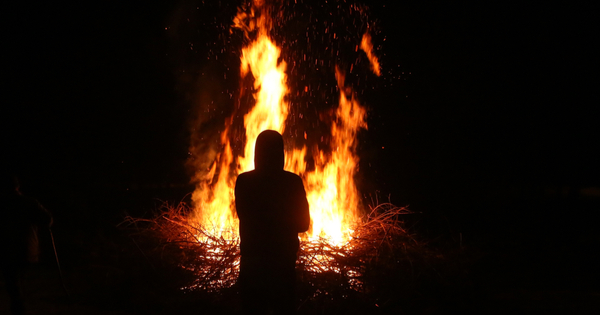 This past weekend in the fire-scarred mountain forest north of Los Angeles, I sat on dank earth encrusted by fallen pine-needles and listened to a small group of courageous men spread throughout the woods around me roar out a long-repressed rage that shook the trees … and I smiled.

For on this men’s weekend retreat, I was showing these men a new way to be with their emotions, and thus a new way to resolve conflict.

Before we started this practice – which I call “Anger Yoga” – I told them that if we did this right and some hiker on the trail heard us, they’d be terrified, and they’d run till they found reception and could dial up the police.

So I figured we had a 50/50 chance of being arrested on this lovely Saturday afternoon in the woods.

I actually hadn’t intended to teach “anger yoga” on this retreat.

But when conflict arose in the group that morning – as it inevitably does when men first get real with each other, and with themselves – I didn’t want them to merely try talking it out.

Although “talking it out” is generally considered the “mature” way to resolve conflict, I know from years of coaching men (and women and couples, too) that merely talking things out when anger is present often just bypasses the emotion and rarely gets to the root cause of the conflict, which is (mostly) never about what’s actually happening in the moment, anyway.

We, men, are Angry. Furious. Enraged.

Our rage has nothing to do with those Republicans or Democrats.

It has nothing to do with the (often) unfair accusations our intimate partner makes in her (his) own moments of upset.

We’re not angry because of traffic on the 405, or the boss/spouse who doesn’t respect us, or the lack of money in our account, or our sports team sucks this year, or or or.

We’re furious because our fathers long ago left us alone to find our own way (even if they were physically present).

We’re frustrated because no one taught us how to truly, fully love a woman, or another man … or ourselves.

We’re sad because we feel deeply unseen in our efforts, our always good intentions. We’ve always felt unseen, misunderstood, unacknowledged, for, despite all the good we attempt, it’s never considered enough. Not by others, and not by ourselves.

Without elders/fathers telling us we’re enough, that we’re already a success, how can we ever know?

We’re confused because we’ve been taught money, comfort, success should make us happy … yet it never does.

We’re also scared, because despite our armor we don’t feel safe in the world.

To feel what we feel.

We’ve only ever seen anger used to hurt people.

In our deepest hearts, we men don’t want to hurt anyone. So, at least initially, we’ll hurt ourselves instead by swallowing our anger, pretending we’re ok when we’re not.

As it festers inside, it leaks out sideways in the form of meaningless work, shallow relationships, emotional vacancy, and addiction.

For those of us who can’t suppress it long – like myself – like trying to hold a giant beach ball under water, when our anger finally explodes outward it launches haphazardly misdirected towards an unsuspecting loved one, the driver who just cut us off, our brother who supports republicans/democrats, or the supermarket cashier who can’t push the buttons fast enough.

We men desperately need safe places to feel our emotions.

Places where we can be witnessed in those emotions without being judged for them.

For even in our intimate relationships, where we’re often asked to share our emotions, when we do, it doesn’t often go well – after all, our partners tend to mirror our lack of awareness and skill in this domain.

At the retreat, after these men had spent about 30 minutes rumbling the woods* with their anger, howling out like wolves scattered across the land (a beautiful metaphor one of the men used to describe this primal experience), we came back together and circled up.

I invited any man who wanted to be witnessed in whatever emotions remained, to step into the circle. As they did, one by one, each man allowing himself to be witnessed by the men encircling him, and by the towering regal redwoods encircling us all, while residues of anger lingered, what had become more evident now … was sadness.

One by one, inside the circle, tightly controlled man-faces trembled as the last vestiges of inner resistance finally gave way to anguished torrents of tears and snot.

We took turns holding each other as we cried out lifetimes of sadness together.

It was wildly beautiful.

I almost wish we had been arrested, for then I’d get to explain in court, on record, that all we men were doing was expressing emotions, doing no damage to anyone or anything*, and that we came to the woods because we have few places, if any, where we can safely express out our rage in ways we won’t be judged (or arrested) for.

But we didn’t get arrested.

We continued on with our retreat, our wild masculine hearts now splayed wide open, that morning’s conflict eliminated not by men struggling to get agreement over the facts of who did what to whom, but by the heartfelt apologies that floated effortlessly out of men who had just been witnessed in – and witness to – the massive pain, and the massive courage, that lives inside every man’s heart.

After all, it’s impossible to fight someone else once you discover you’re only ever fighting against your own internal resistance to fully feeling what you feel.

Imagine a world in which men – women, too – have safe places to feel our anger.

What an invigorated, open-hearted, deeply connected world we would surely be.

This post was previously published on BryanReeves.com and is republished here with permission from the author.

Facebook154TweetPinEmail1Shares155
wpDiscuz
Share this ArticleLike this article? Email it to a friend!
Email sent!