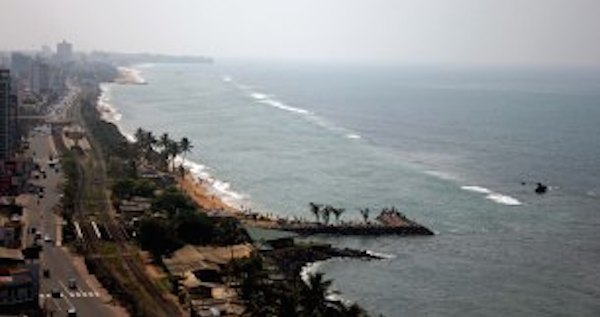 When I first stepped into the lobby of the Ozo Hotel, I looked up at the high ceiling and saw the pipes that seemed to be aiming down, like the belly of a spaceship coming down to land.

This was definitely a place that I generally avoid when it comes to accommodation; fancy, illustrious and a little overwhelming with its technology – for me at least. But get past all the fancy-shmancy aspect of it and you come down to the core of the place.

What really runs it isn’t its engineering department or its kitchen or even the rooftop bar with an infinity pool that looks out to the Indian Ocean.

And it’s not the spectacular sunset that accompanies the happy hour from six onwards or the fully stocked bar to complement it as you sip your favourite cocktail while watching the waves break below as the local train chugs by on the beach-side track.

It’s not the different themed nights that unfold on the rooftop bar where you can watch the moon rise as the sun sets to jazz, funk or Cuban Afrobeats played through the carefully designed sound system that the DJ and live bands use to convey their sounds to the mixed crowd of international and local folk.

It’s not even the incredibly diverse food choices of a full buffet spread (or order off the menu) fusing western dishes with local cuisine. Nor is it the décor of the rooms each with a large, flat screen TV, temperature-controlled AC or a bathroom that’s as big as the room itself.

It’s not the city-wide or ocean views that await you from any corner of the 14-storey building. And it’s not the welcoming lobby or rooftop with retractable roof to provide shade for those really hot days when the infinity pool just isn’t enough.

Because what is a place if not for its people?

The staff of Ozo Hotel Colombo (it’s a chain) are some of the most accommodating, friendly, smiling-faced folk I’ve ever come across. And they don’t have an inch of fake to them. They genuinely want you to enjoy your time so that you’re happy and relaxed, which is the whole point when you visit anywhere. Yet here, it seems to be the emphasis of Ozo’s staff.

From the moment I stepped into the lobby to the moment I stepped out 24 hours later, from the receptionist to the bartenders, from hard-working chefs and kitchen hands to the bellhops and the guy doing the rounds asking if you have any laundry; everyone made me feel at home and beyond.

Cause even at home it’s rare that everyone smiles and worries over you. And although these kinds of hotels aren’t my general draw, the uplifting energy at Ozo Colombo was enough for me to tell you that if you really want to spoil yourself on your next visit to what just might be one of the most blessed islands in the Indian Ocean, visit Ozo in Sri Lanka. If not for your stay, then at least for a drink at the rooftop, so you get a sense of what your missing out on.