Find information about visas to Ethiopia, South Sudan and North Sudan (at the time, the two Sudans were in a brief honeymoon period that lasted for about an hour before the civil war resumed) and then get out.

Kenya was in a bit of strife as well. The recent Garrisa University attacks had the Western world warn its population against travelling to the East African nation so I was a bit nervous.

But The Universe has ways to provide signs:

Kenya was country number 16 that I would visit.

The visa sticker was placed on page 16 of my passport.

I then recalled a conversation I had with Irish Dave whom I met in Livingstone, Zambia. “If you go to Kenya you gotta visit Distant Relatives,” he said in his mixed Irish-American-Kiwi accent (he’d been around). “It’s on the coast but be careful,” he warned. “You might get stuck there. I was only going to spend a few days. I stayed three weeks.”

It was the same warning Danny heeded when he had picked me up hitch hiking from Nakuru to Nairboi.

I had pffft at both men’s comments as I made my way to Mombasa, Kenya’s port city where I spent a week before continuing an hour and a half up the coast to the county of Kilifi and down to Kilifi Creek where Distant Relatives is located. I figured I’d stay for two weeks, volunteering on the boat-building project, Musafir and then continue to explore the coastline, mainly hunting my first wave in over a year.

It seemed fitting that I arrived on the eve of the day I set out on my travels two years ago (which also happened to be Irish Dave’s same travel date – May 13th, 2013. Yet, another universal sign). 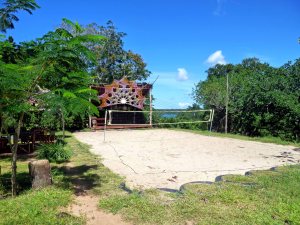 I walked through the herb gardens along the mulch paths, by the beach volleyball court and swimming pool and failed to realise that The Universe had cunningly disguised itself as Distant Relatives Backpackers and Eco Lodge.

It seduced me with the freshest free oysters on Friday’s pizza night, the amazing vibes and friendly locals, the 400-year-old Baobab tree with hanging light-bulbs, shaped as the very fruit the tree bears. At night, the lights are visible from the middle of Kilifi Creek, just a 3-minute walk down the hill.

The creek is home to the Musafir project and some local residents. At night the bio-luminescence comes out to play a light show that will blow your mind. The old jetty ready (though, not quite sure if its willing) to have you sit on its end for sundowners. Later on, after you’ve had dinner from the tasty kitchen or cooked your own in the communal, head back down and stare at the Milky Way while you wait for a shooting star to zip across.

Aside from the main building that houses the communal kitchen, restaurant\bar\indoor dancefloor and reception, the place is built almost out of everything recyclable including glass bottles and used tires. Cement makes up just 10% of the building materials used to create the bandas. The pigs in the sty take care of all the biodegradable rubbish. The chickens in the chicken coup provide fresh eggs, and grey water is recycled to water the lush gardens. 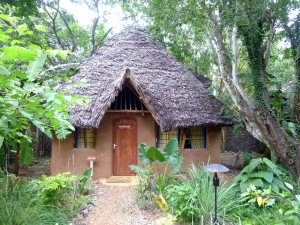 But the gem of the place aside from the vibrant energy?

I’ve come across a few of these in my day but none as eloquently designed as here – complete with an informative booklet to keep you occupied while you occupy one of the three public stalls (each banda has its own private stall and shower).

Tucked away among giant green and yellow bamboo that speaks in windy creaks, two communal showers await to cleanse your mind and body. Refreshing your soul in the middle of the mini-bamboo forest, the swaying shoots add a soothing tone to the natural soundtrack.

The same energy forces that suck you in also attracts yoga instructors that come to spend a few weeks teaching classes once a week out in nature. There’s a choice of either utilising the stage (built for live gigs) or a quiet corner where the wind whispers through the trees, gently floating the leaves as they swing around you while you engage in contorting poses.

Does it stop there? Oh, no. You cannot stay at Distant Relatives without visiting Bofa Beach. Picture white sandy beaches on which the Indian Ocean laps on too. Coconut palms swaying in the monsoon winds. If you dare, you can kayak or swim out to the reef channel and snorkel.

Too save you picturing, here’s a picture: 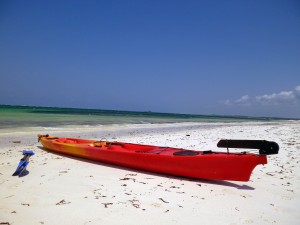 Or book a boat to take you.

It had been ten months since Irish Dave first brought this area to my attention on the eve of my personal New Year, May 12th. Sitting by the bonfire on the beach, ripping out tunes on Ol’ Red with the Musafir crew, I could see why he struggled to leave this corner of the world.

And now, four months after I initially arrived, I’m still here, wondering how to extend my Kenyan visa.