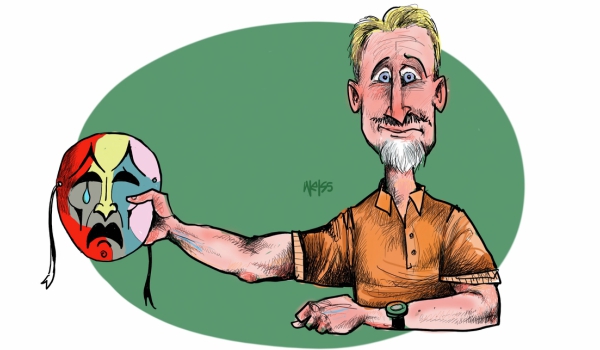 Sadness is a fact of life for most people. Whether we like it or not, there will be circumstances and events in our lives that cause sadness. We may view sadness as an unwelcome emotion, but it serves us in unexpected ways.

An article in Changetools.co.uk notes:

“Sadness is a force of great depth and breadth. Too much sadness leads us to be passive, depressive, self-pitying and incapable of action. Too little leads us to be superficial, indifferent, repressing and lacking insensitivity.”

There’s an Elton John song titled “Sad Songs (Say So Much).” The song speaks to the universality of emotional pain. Here are a few of the key lyrics in the song:

I don’t know if creative people are specially equipped to feel and channel deep emotions, but I suspect they are. I know that as an artistic person, I feel things deeply.

I have often found melancholy and sadness to stoke my creative expression. It seems counter-intuitive, but it’s true. More than happiness, moments of sadness seem to unearth poignant thoughts, words and ideas.

“Studies have shown that, contrary to being a ‘useless’ emotion, sadness is beneficial to us in ways that actually enhance our well-being. Joseph Paul Forgas, Ph.D., has discovered that when we are sad, we can remember details more accurately, have better judgment, and have more motivation than when we are happy. This seems to be due in part to sadness functioning as a signal that something is not right, making us more attentive to detail, more alert to social cues, and/or more motivated to make changes.”

Our souls at night

A while back I read Kent Haruf’s devastating novel, “Our Souls at Night.” A Wall Street Journal review had this to say:

“The book begins with a proposition: A 70-year-old widow named Addie Moore knocks on the door of a longtime neighbor and asks if he would like to come to her house at night to lie in bed — not for sex, but to talk and fall asleep together.

‘I’m talking about getting through the night,’ she says. ‘And lying warm in bed, companionably. Lying down in bed together and you staying the night. The nights are the worst. Don’t you think?’

In real life, Kent Haruf was diagnosed with interstitial lung disease. He decided to write one last novel before he passed away. Normally, it took him six years to craft a novel. But, knowing time was short, he spent approximately 45 days in his writing cabin. He emerged with the first draft of “Our Souls at Night.” 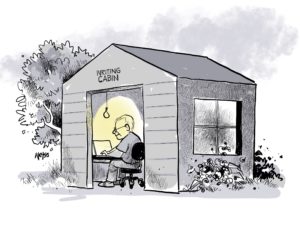 The Wall Street Journal described “Our Souls at Night” this way:

“A short, spare and moving novel about a man and a woman who find love late in life, ‘Our Souls at Night’ is already creating a stir. The novel has been selected by the American Booksellers Association as the №1 Indie Next Pick for June. Discussions are underway for a film adaptation, according to Mr. Haruf’s agent, Nancy Stauffer.”

The book has since been adapted to film, starring Robert Redford and Jane Fonda. Here’s the trailer:

Kent Haruf rekindled an old friendship at a high school reunion with a woman named Cathy. When both their marriages ended later in life, they came together and married. His last novel “Our Souls at Night” captures much of what he and Cathy found together.

Writing the novel was therapeutic for Haruf, as he states in the Wall Street Journal article:

“In some ways it felt as if that was what was keeping me alive,” he said. “It was something significant for me to get up for every day.”

I think that’s true of most artful people. Our appetite for creative expression is immensely important. It’s what keeps us going in many cases. Even when the inspiration comes from a sad heart.

Kent Haruf finished “Our Souls at Night” not long before he passed away. Obviously, he had something left to say. The creative soul does not yield easily.

It’s not hard to feel the sadness in Kent Haruf’s writing. The unexpected power of sadness is that it can fuel some of our best, creative work. It certainly did for Kent Haruf.

Clearly, even in the twilight of an artist’s life, there is room to channel sadness into creative expression. To share with readers and viewers a reflection of our human soul. The beauty and humanity that resides within us all.

It was strangely therapeutic

There have been downtimes in my life when things were not going well. I remember sitting up late at night, sipping tea and watching country music videos. The videos were strangely therapeutic.

Some of them dealt with loss, missed chances, regrets and more. They pulled at my heartstrings and drew to the surface repressed feelings and emotions. The tears that came purged a few demons, and lightened my emotional load. 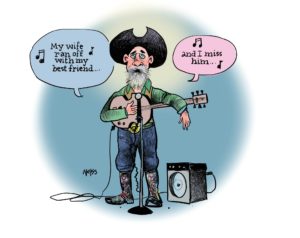 Whether you’re a country music fan or not, you have to hand it to those cowboy musicians. They have a knack for capturing emotional pain.

Consider Blake Shelton’s moving song “Goodbye Time,” which portrays the difficult end of a relationship. The music and video illustrate the power of channeling sadness into great artistry.

The joy and the curse

The joy and curse of being a creative soul is that you feel things deeply. It’s what enables you to create moving artwork and poetic passages. But it’s also what can drag you down.

Navigating sadness requires a fine calibration. You must allow yourself to feel the melancholy, in order to process it and find release. Then you have to brush yourself off and soldier on. Sometimes, you can completely purge the pain. Other times, it lessens, but you will always carry it.

I guess that’s the deal. If you want access to the emotional, creative muse, then you have to accept the inevitable pain that deep feelings and experiences can bring. Maybe that’s what Elton John meant in his song “Sad Songs.” That part about, “and it feels so good to hurt so bad.”

Sometimes you just need to feel something

Whether you’re a writer, artist or musician, I encourage you to continue reading those heartfelt novels. Listen to those sad songs and allow your heart to be moved by the deeply felt, creative expression of others. Hug that sad, little Teddy bear of yours. 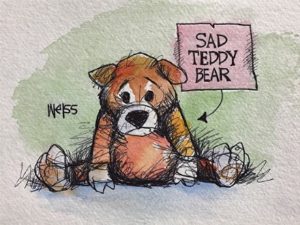 Beyond the superficiality of social media and quotidian rhythms of life, there exists a deeper tempo of living. It’s a kind of music. Sort of like a slow, mournful cello that beats within our hearts. When we connect with it, we sense our humanity. Our common experiences.

Sometimes, life gets to be a bit much. The endless march of work, responsibilities, commitments and obligations. We get lost in the day to day until something happens. A deep emotional chord is struck. It’s what causes some people to burst into tears, quit their jobs or do uncharacteristic things.

Yet, such emotional events also spark great, creative insights and even breakthrough work.

Sometimes, you just need to feel something. To awaken you from the blur of daily living. When it hits, don’t fight it. Take the time for that sad song, late-night movie, country music video or moving novel. Periodically, we need a good cry. We need to reconnect with our emotions. To deny them is to deplete a bit of our soul. And repressed feelings are unhealthy.

Near the end of the Wall Street Journal article about Kent Haruf, this was written:

“On the night of Nov. 29, Kent and Cathy Haruf lay in bed — she in their queen bed and he in a hospital bed alongside it. They held hands, talking quietly, then fell asleep.

When she woke in the morning, he was gone.”

Hopefully, we have many moons before life is done with us. Be sure to make time to feel things deeply. Sad songs. Touching music videos. Poignant novels. Melancholy movies. Channel these things into your art, writing or music.

In this way, we connect with the breadth of our humanity, touch others, and share the gift of living.