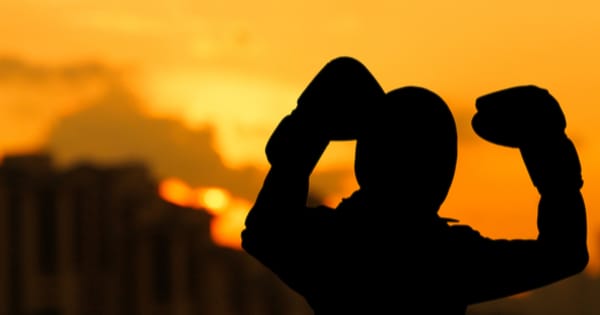 Here’s what I know about Bryce “Thug Nasty” Mitchell:

He’s a UFC fighter from Arkansas.

He really wants Reebok to get him some camo shorts.

And, he just might be my new favorite athlete.

I’d never heard of “Thug Nasty” until after he defeated Bobby Moffett via unanimous decision last weekend, remaining undefeated at 11-0.

Funny thing is, I didn’t even watch the fight.

I just saw a clip from his post-fight interview. Here’s what “Thug Nasty” said:

“Hey Papaw? Call my momma and tell her I’m fine. And tell her to be hungry when she picks me up. I’m taking her out for steak. I wanna thank Arkansas. Everybody back home, remember, y’all my inspiration. I ain’t supposed to be here ‘cause I’m from Arkansas. They told me I had to leave Arkansas to be worth something. Every time you put a mike in my face, I’m gonna say Arkansas! And Reebok, I told y’all I want some camo shorts!”

I hear you, brother. Loud and clear.

And I’m guessing the members of Razorback Nation, a fan base that has endured their fair share of disappointments over recent years — including last week’s firing of longtime men’s basketball coach Mike Anderson — are more than ready to get behind “Thug Nasty,” the 24 year-old Cabot native.

His passion for Arkansas takes me back to my childhood: 1994. Second grade. Dwight Elementary. Bill Clinton was in the Oval Office, and the Razorbacks had just won the men’s NCAA basketball tournament. National Champs, baby!

High times for the Natural State.

I carried my passion for Arkansas with me when I went down to south Florida to play football for a year. I wore boots and Razorback t-shirts. Not so much because I was a fan, but because it was where I was from. It made me different. I did the same thing when I ventured up north to Sweden.

Bryce “Thug Nasty” Mitchell also wears his Arkansas roots like a badge of pride. By Monday, his post-fight interview had gone viral, blowing up across nearly every social media platform.

I’d urge you to Google Bryce’s speech. Watch it and listen to this young man scream his heart out on national television. His passion for Arkansas is so genuine — so raw — it’s contagious. It’s also really funny.

For example, late in the interview, the reporter asks Bryce what he’s planning to do with the fifty thousand dollars he’s just been awarded.

True to form, Bryce keeps his answer short, saying the camper he lives in needs a new roof, and if there’s any money left after that he might try and pave his driveway too.

When the reporter prods him about why he wants to pave his driveway, Bryce explains, “I live in a field man with cow s**t everywhere. So it’s like, every day I park in the gravel and then walk in cow s**t and then wipe my boots off and then go inside. So it’s like, yeah, I want to have a nice gravel driveway.”

Even if you’re not a fan of MMA or UFC, do yourself a favor and check out this bright new star in the world of Arkansas athletics. I have no doubt that Bryce “Thug Nasty” Mitchell is here to stay.

And Reebok, get this man some camo shorts!