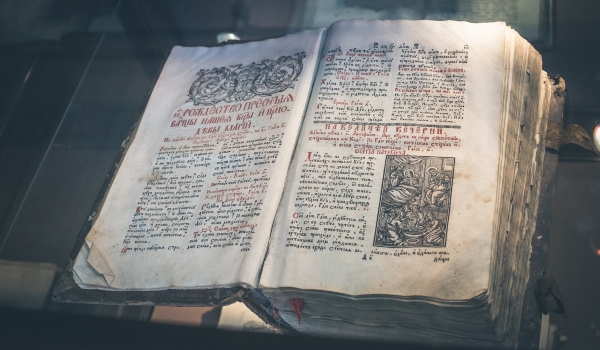 —
The Catalogue of Illuminated Manuscripts contains descriptions and images of the most lavishly illustrated and decorated manuscripts in the British Library’s collections. But for the purposes of our catalogue ‘illuminated’ is applied in its widest sense, so that not only manuscripts with gold and silver decoration, or those containing exquisite miniatures, are included. In addition, manuscripts with lesser decoration, some with initials in colours, but which contain interesting texts or script, are in the catalogue and in some cases images will be added later as they become available.

Here are two examples from the Royal collection:

This manuscript of Ælfric’s Grammar dates from the second half of the 11th century, the late Old English period, and is copied in a clear, concise script, which clearly distinguishes the two languages. The Old English text is written in Anglo-Saxon round minuscule and has insular letter forms like þ and ð while the Latin is copied in English Caroline minuscule with horizontal feet on the minims, characteristic of English style. Metallic red initials and red rustic capital titles are the only decoration.

Ælfric of Eynsham, born in 950, was educated at the monastery of Winchester, where it is believed that a standardized written form of Old English was developed. This manual, based on Priscian, was written circa 998, and is an introduction to Latin grammar for English students. It is the first Latin grammar written in the English language and Ælfric used considerable skill to adapt the vernacular, in some cases coining new linguistic terminology for the purpose. Latin terms, when used, are accompanied by their English equivalents; for example, ‘tempus tid, modus gemet… numerus getel,’ and the aim is to give simple, clear explanations of complex Latin grammatical concepts.

Royal 15 B xxii is believed to have been owned by Matthew Parker, Vice-Chancellor of Cambridge University and Archbishop of Canterbury in the 16th century, as it contains notes and markings in red pencil probably in his handwriting. The 11th century text is incomplete, and the missing portions were supplied from another manuscript while in Parker’s possession.

There are 6 manuscripts of Ælfric’s grammar in the British Library, and they provide an insight into how medieval scholars viewed languages, particularly the English vernacular, in a period of linguistic upheaval brought about by the Norman Conquest.

This manuscript contains an English collection of historical and geographical works in Latin and French compiled circa 1400. I will focus on three texts, the first two of which are in Latin.

The ‘Chronica Maiora’ is a contemporary account of the reign of Richard II and the influence of John of Gaunt by Thomas Walsingham, who, as chronicler at St Albans Abbey, had unique access to the records kept there and was acquainted with the key players. The text in this manuscript is believed to have been copied by him or under his supervision in the late 1390s and provides a ‘breaking news’ version of events, including the Peasants’ Revolt, from the perspective of the monks at St Albans.

Sir John Mandeville’s Travels describes the travels of an English knight who left England around 1322 and journeyed throughout Egypt, Ethiopia, India, Persia and Turkey. Though many of the geographical details are accurate, there are fantastical accounts of people with the bodies of humans but the heads of dogs, and of a tribe whose only means of sustenance was the smell of apples. The existence of a person by the name Mandeville, who claims in the preface to be from St Albans, is doubtful.

‘Des Grantz Geanz’, a short version of the verse history of early Britain from Albina to the reign of Brutus Greenshield, is in Anglo-Norman, the French dialect spoken and written in England after the Norman Conquest. Albina and her sisters, set adrift by their father, the king of Greece, for the attempted murder of their husbands, land on an uninhabited island, which is then named Albion after the leading sister. The sisters founded the giant race of Albion which is conquered by Brutus, who renames the land Britain. The rest is history!

The hybrid gothic script combines the rounded loops and long ‘r’ of English cursive handwriting of the period with a more formal gothic aspect. The puzzle initial at the head of the page contains lattice-work and foliate decoration in the English style and there are numerous smaller decorated initials in red or blue. Copied at St Albans, this large volume entered the Royal library during the reign of Henry VIII, along with numerous works expropriated in the Dissolution of the monasteries.