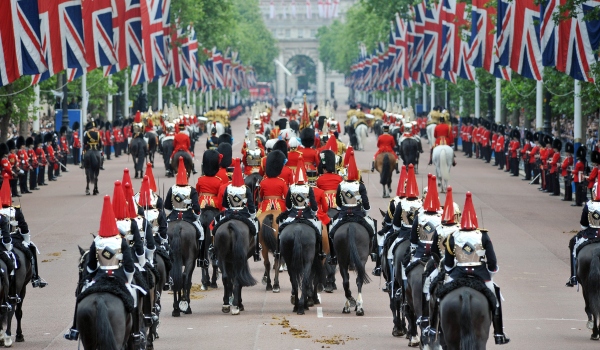 —
On 29 April 2011, Prince William of Wales, future heir to the throne, will marry Catherine Middleton at Westminster Abbey. William and Kate famously met and fell in love at the University of St Andrews in Scotland, where they were both studying History of Art.

Medieval royal marriages, in contrast, were typically political alliances that resulted from cold diplomatic calculations rather than being unions of love. Five miniatures selected from manuscripts that once belonged to the kings and queens of England (most of which will be displayed in our forthcoming Royal manuscript exhibition) give an insight into the stories of five royal couples, and the ways that their lives and marriages were recorded and remembered.

This marginal painting was introduced by Matthew Paris into the margins of his Historia Anglorum (The History of the English) to illustrate a passage in which the chronicler discusses the marriage between King Henry III of England (1216-1272) and Eleanor, daughter of Ramon Berenguer V, Count of Provence, and Beatrice of Savoy. The ceremony that took place in 1236 in Canterbury Cathedral is evoked here by the King’s gesture of placing the wedding ring on the Queen’s finger.

Although Eleanor had never seen her future husband prior to the wedding, the couple became very close during their marriage, to the extent that the Queen’s influence on the King and the presence of her Savoyard entourage were heavily criticised by the barons and inhabitants of London. On 13 July 1263, certain angry London citizens even dared to attack Eleanor’s barge when she was sailing down the River Thames.

The first volume of Jean de Wavrin’s Chronicles of England ends with the reign of Edward II (1307-1327). The chapter that tells Edward’s story opens with this beautiful and atmospheric illumination of his marriage to Isabella, daughter of Philippe IV of France, at the parvis of a gothic church. The ceremony that took place in 1308 at Boulogne-sur-Mer was preceded by almost ten years of political negotiations, but instead of long-term profit this matrimonial union was to bring about a war between the two kingdoms. Edward III, the couple’s son, would use his French royal descent to claim his rights to the French throne in 1340, and thereby initiate the Hundred Years’ War.

Edward II’s marriage to Isabella was not a happy one. From the beginning, the King was more interested in the male company of his favourites. He even sent all his wedding gifts to his long-term companion Piers Gaveston. Soon the neglected Queen became the head of the opposition against her increasingly unpopular husband. The next image in Wavrin’s Chronicles shows Isabella, known as the She-Wolf of France, at the head of an army, plotting with her lover Roger Mortimer to overthrow the King.

This manuscript does not, however, provide a contemporary record of events. It was created over a hundred years later in Bruges, and was adapted for King Edward IV (1461-1470, 1471-1483).

The artist known as the Master of the London Wavrin (the same artist who illuminated Royal 15 E. iv) was also responsible for the miniatures in this volume of Jean Froissart’s Chroniques, which once belonged to Sir Thomas Thwaytes (d. 1503), former chancellor of the Exchequer and treasurer of the Pale of Calais. The image at the beginning of the chapter of the Chroniques describing the events that led to Richard II’s second marriage in 1396 shows this English king receiving his young bride Isabel from her father, Charles VI. Isabel was only six years old when she married Richard, six years younger than the age limit for marriage decreed by canon law. The union had a purely political background; it sealed the twenty-eight year truce between England and France. The infant queen Isabel did not stay long in England; she was returned to her father in 1401 after her husband was deposed and murdered.

This manuscript of Jean Chartier’s Chronique de Charles VII is the last volume in a set of the Grand Chroniques de France that Sir Thomas Thwaytes, treasurer of the Pale of Calais, intended as a gift for Henry VII (1485-1509). Its first chapter opens with a monumental image of the marriage of Henry V (1413-1422) and Catharine de Valois, with the initials of the royal couple, ‘K de France’ and ‘H. le Einglieshe’, inscribed at their feet. The marriage that took place on 2 June 1420 was arranged by the Treaty of Troyes, according to which Charles VI of France not only gave his daughter’s hand to the King of England, but also declared Henry V Regent of France and heir to the French throne. The wedding scene must have had a special meaning to Henry VII’s own royal identity. Queen Catharine, who secretly married Owen Tudor after Henry V’s death, was Henry Tudor’s grandmother. Multiple badges of a Tudor rose alternating with the golden portcullis of the Beauforts in the marginal decoration refer to another important matrimonial alliance. The union of the red and white rose symbolises the union between the houses of York and Lancaster, which was reaffirmed by the marriage between Henry VII and Elizabeth of York in 1486, only a few years before this manuscript was created.

This unique collection of chivalric romances and treatises was a wedding gift presented by the renowned military leader John Talbot (d. 1453), Earl of Shrewsbury, to Margaret of Anjou, consort of Henry VI (1422-1460, 1470-1471). Although Margaret is depicted here as the Queen of England, sitting on a throne and holding her husband’s hand, it is more probable that she received the gift of this manuscript in France before her marriage and coronation in England. Guaranteed by a twenty-month truce between England and France, the betrothal of Margaret, daughter of René, Duke of Anjou, to Henry VI, was celebrated on 24 May 1444 in St Martin’s Cathedral at Tours. The English king was not present at the ceremony, and so the Earl of Suffolk acted on his behalf. On her way to England, Margaret stopped in Rouen, in Normandy. Because her wedding manuscript was illuminated by one of the most successful artists working there for English clients (now known as the Talbot Master), it is likely that John Talbot presented his gift to Margaret during her stay in the Norman capital.