“Squeaky wheels get the grease.”

There’s a reason for that. That constant, relentless, merciless, high-pitched squeaking will bring a person to their knees. With the right wheel, with enough accumulated rust and a little bit of friction, you can annoy a moose into knitting a scarf. A wheel’s squeak can be just that bad. As can people.

Anyone who works in an office deals with at least one of these people daily. The person who – for instance – doesn’t realize that around the time desktop personal computers were invented, so were headphone jacks. This little hole accepts the male end of standard headphones, muting the sound for everyone except the person wearing them. Why would someone in a busy office not use them?

Why wouldn’t someone bothered by their office neighbor’s ambient noise ask them to use headphones?
Crazy people can do crazy things, that’s why. Offence would be taken, grudges would be held, friendships would end.
Round and round goes the squeaky wheel. 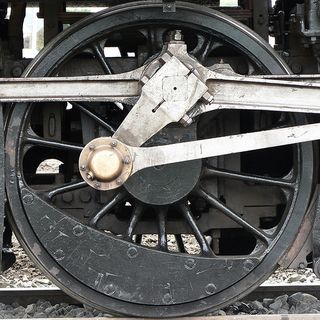 They roll around everywhere, these crazy squeaky wheel people: their stereos blasting from their cars at 2am; their shoulders wedging their way into line while they pretend they don’t see the people patiently waiting.
Some of my favorite squeaks are after the wheel next to me comments on a phone call which was none of their business:
Me on the phone: “Ok, honey; I’ll pick up some pork chops on the way home to throw on the barbecue. Anything else? ‘K; love you, too.”
Hang up.
Mrs. S. Wheel: “Mmmmm….pork chops!”
Who invented these Wheel people?
Why did I not just turn to Mrs. Wheel and politely say: “Please, I’d like my conversations to at least preserve the illusion privacy.”
Because Mrs. Wheel is crazy.
Because individuals who routinely disturb others lack the logic to realize they share the planet to begin with; therefore, they take offence at the notion someone may not appreciate them all the time.

There are Mr. Wheels, too. Like the guy on the beach last month burying his cigarette butts in the sand. On that occasion, my friend actually spoke up. She could afford to do that, since women are rarely punched in the nose by strangers. Mr. Wheel laughed at her, and then shared some secret funny joke with his wife, Mrs. Wheel.

According to online sources, the wheel was invented in Mesopotamia five-thousand years ago. The first squeak (yes, wood squeaks) was heard about 4,999 years, 364 days ago. Since then, Squeaky Wheels have been known to:

The problem with Wheels having kids is: their kids become Training Wheels; little annoying adults in waiting. You’ll recognize them when you see them: they’re the ones kicking shins and ramming the Costco shopping cart (the one with the squeaky wheels) into your calves from behind.
* important note: somtimes my kids do that thing with the shopping cart, but that’s diffferent.

Maybe I’m just becoming an old, crotchety person: more sensitive to noise, more protective of my privacy. By the way, I’m not blind to the irony of complaining of invasions of my privacy while regurgitating my thoughts onto a blog.
What can I say; I find this process very soothing and therapeutic. It keeps me on an even keel.

I have to go, someone just complained about the loudness of my typing.
What a nut job.