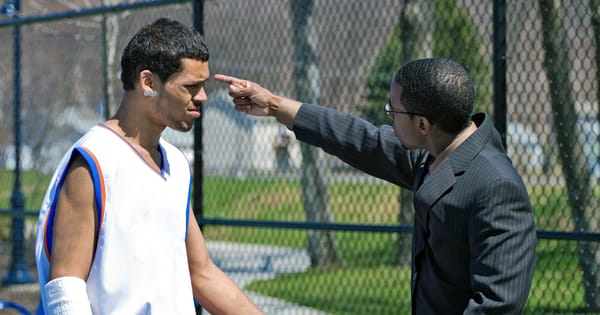 A few months ago I went into a screaming tirade with my son after a really bad game. The outburst included me telling him to “stop playing like a B#@#$.” I was hot and disappointed because I know his potential and his pouting and feelings were getting in the way of him being his best. My eruption was part tactical, part necessary, part out-of-control, part masculine expression, but all wrong in practice. In a very ironic turn of events, what propelled me into the tirade was my son yelling at me in front of his coaches and teammates. One would say the apple doesn’t fall far from the tree.

I felt bad about it, but not apologetic for my reasoning. He was engaging in a court habit and behavior that wasn’t good for him or his team in sports or life.  The only saving grace was that this all happened in my car with just him and I. My conversation was direct, intentional and private. Well, up until he came home and told his mom what happened (conversation for another blog).

Anyway, we got through it. I apologized and said everything I had to say over again without the one BIG CUSS word. I also explained to him why I used it in our conversation. The talk ended with me saying to him, if you keep acting the way you did that night on the court, it wouldn’t be the last time you would hear the word and next time it won’t be used by me. Fate would have it that Draymond Green would use the same word on Kevin Durant a few weeks later. It sort of made my point.

Since then we’ve had discussions after bad games, with much better outcomes and using other effective parental tactics to make my same points. If you can imagine, the awkward episode and subsequent adjustment of communication has actually improved our dad and son relationship. We understand each other now.

Fast Forward…Today we got to witness a conversation of a very different nature. A parent/coach extremely and aggressively yelling, cursing, reprimanding (verbally and physically) and humiliating his own young team in an effort to provide some level of coaching.  In no way did I see myself in that, but what I did see is that sometimes adults don’t understand that parenting, mentoring and coaching are blurred lines for children.

You can’t be an out-of-control, a**hole coach and be a good mentor or parent. Youth can’t distinguish the difference in your roles. Watching the interaction gave me pause and the opportunity to point out a couple of things to my son and nephew (who were watching also):

Obviously there are age-appropriate variations of coaching styles and I certainly understand using colorful language. I also clearly understand the desire to win. However, when you are working with children, the same principles that apply in applying discipline should apply in coaching. If you are not coaching to guide and teach without causing harm then you are simply abusing.

If only 0.3% of high school players make it in the NBA, only 2% of NCAA seniors make it to the NFL and only 0.5% is drafted by the MLB, what are you really coaching them to be?