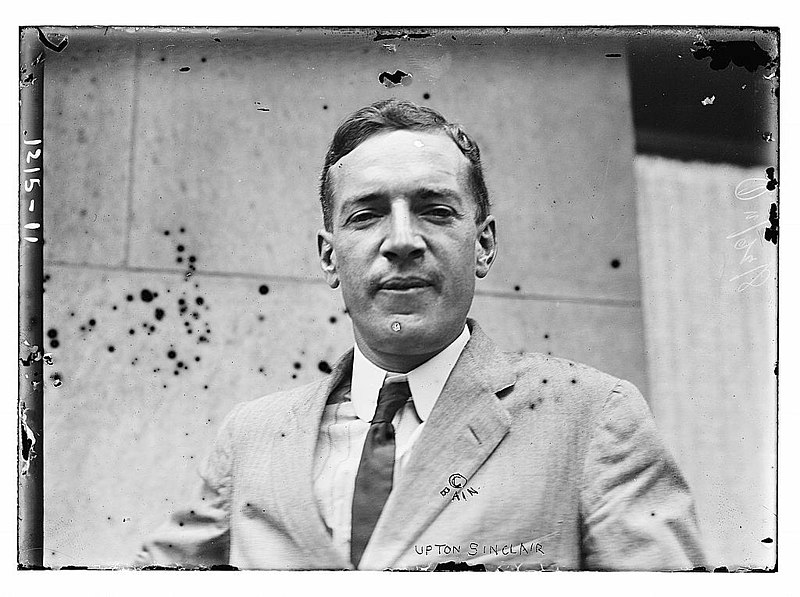 “We are not makers of history. We are made by history.”

It’s interesting to me that in the past few years,  in terms of the widening political debate about Democratic Socialism in the United States, that the name Upton Sinclair has not been more brought up or bandied about.   Why?  Because before Bernie Sanders was even born, before Alexandria Ocasio-Cortez’s parents drew breath, Sinclair was making national headlines and creating similarly seismic socialistic waves across the country.

In 1933, Sinclair, author of The Jungle, the muck-raking novel which exposed labor and sanitary conditions in the U.S. meatpacking industry, ran for Governor of California on the Democratic ticket.   In addition to being one of the best-known writers in the country, Sinclair was also one of the best-known socialists of the time, having joined the party of Eugene Debs and Jack London early in the century.  His involvement in this movement peaked with his founding of the End Poverty in California (EPIC) initiative, which became the foundation of his candidacy.

In a best-selling pamphlet, Sinclair spelled out EPIC’s goals, such as turning farms and factories that had been vacated or shut down due to economic crisis into cooperative ventures run on the basis of “production for use” instead of production for profit. EPIC also wanted a state-managed cooperative economy that would provide jobs for the unemployed while blazing a path for the replacement of the private economy based on profit. Although branded a dangerous radical by many, Sinclair’s message connected in a meaningful way with those living on the margins, including the state’s large population of migrant workers, new immigrants, and families displaced by the Great Depression.

The Democrats, despite trepidation from entrenched leadership, saw an opportunity with Sinclair and invited him to run under their banner. The ensuing campaign was rough, to say the least.  Sinclair was shredded by the newspapers, and by Hollywood, run, at the time, by starch conservatives.   For example, according to Zelda Roland in KCET News, MGM put their film-making machinery to work against Sinclair.

Packaged with its feature films, the studio distributed fake newsreels designed to scare voters away from Sinclair. Masquerading as “California Election News,” with the MGM or affiliate name appearing nowhere, these newsreels featured a narrator who calls himself the Inquiring Cameraman, asking people on the street their preferred candidate in supposedly candid interviews. MGM played on Depression-era Californians’ fears of unemployed people moving west en masse from other states and showcased those deemed “undesirables” – people who appeared poor, homeless, dirty, or illiterate – declaring their sympathies with Sinclair, while citizens who appeared clean and educated were shown supporting the incumbent Republican.

Despite this organized and powerful interference, Sinclair won the Democratic primary, but in the end was barely edged out in the general election.  Some believe his strong showing further empowered President Roosevelt to push forward with his own public works projects.  It certainly changed the political landscape in California, and, many historians agree, encouraged Hollywood creatives, actors and writers and directors, to rebel against the dictator-like control over their political choices and begin an ascent toward liberalism.

I share all this not to make a political point – to sway or change opinion on Democratic Socialism or the candidates that might be championing or castigating its precepts and ideals.  But I do believe it essential, and also empowering, to learn all we can from the past in order to make informed choices in the present.  We limit ourselves when we become only forward-thinking, when we don’t take time to reflect and consider what came before in order to move ahead.

Democratic Socialism is not new – this is not the first time it is on a ballot, as Sinclair’s candidacy can attest, and it will not be the last.   Only history will be able to say how it plays out in the end.  And only then, sometime in the future, can it begin again.

Facebook82Tweet4Pin1EmailShares87
wpDiscuz
0
0
Would love your thoughts, please comment.x
()
x
| Reply
Share this ArticleLike this article? Email it to a friend!
Email sent!