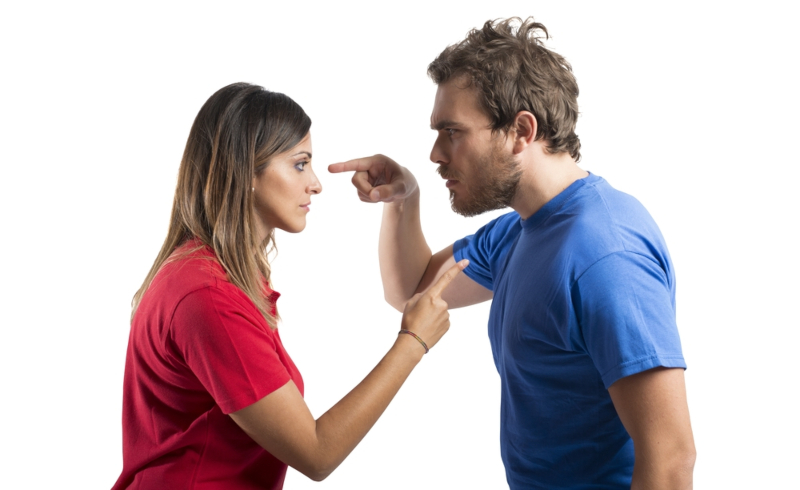 To complicate things, things haven’t been going well at work for Luke, and that has left him even more on edge. He would be the first to admit that his patience is pretty much depleted at this point. So you can imagine how he reacted when the topic came up again.

Luke made the same point he has been making all along, and Kaylee made her point. “You are totally not listening to me,” he said to her.

“Oh, I heard you,” Kaylee responded. “Over and over. You’re not listening to me!”

“What? Not listening to you?” Luke said. And then, he said something that even at the moment it came out of his mouth, he knew he would later regret:

Now, I will let you fill in the two blanks. In the first blank goes an adjective, choose one that comes to mind. And in the second blank, goes a name that you might call someone out of anger.  Examples?  Stupid idiot?  Stubborn fool?  Overgrown child?  Or maybe something a whole lot worse.

Name-Calling Hurts Your Partner. And You. And Your Relationship.

I often talk to couples about name-calling. It happens more than you might imagine. What about at your house? Do you and your partner have discussions that turn into arguments, with flaring tempers and, finally, calling each other names?

I don’t judge my clients who talk to me about the names they call each other out of anger, though I have to admit I am sometimes surprised – and not in a good way – at the hateful words they throw at each other. But I am concerned about the impact.

First, name-calling can put a wedge between you and your partner. Names can cause resentment and a break in trust that will be difficult to repair.

Second, names do emotional damage. Your partner may already be feeling vulnerable, and the name you call them may cause them to feel bad about themselves, to lose self-confidence, to feel unloved.

Third, name-calling is not “fighting fair.” Once you toss a mean-spirited name in your partner’s direction, the words that follow no longer carry any weight. People who call other people names don’t have any credibility, the reduce themselves to spewers of hate speech. And the person being called the name may be so affected by your words that they can’t or won’t respond further.

Fourth, name-calling impacts your own emotional wellness. All that poison you allowed to build up doesn’t get released when that name pops out of your mouth. Name-calling can fuel more angry feelings, and more name-calling. Later on, the guilt and regret that ultimately results leaves you feeling even worse.

The bottom line is that name-calling may feel justified and deserved at the moment you hurl one in your partner’s direction. But the damage to your partner, to you, and to your relationship just isn’t worth it.

Here’s how to avoid the urge to call your partner names when you are having a heated discussion.

Avoid escalation. This is called being proactive. If your discussion with your partner starts to heat up, and begins to veer into the territory in which your temper, and your vocabulary, might get out of control, do something immediately. This might mean suggesting the two of you take a break. Or that you both lower your voices and speak more calmly to each other. Say something like “let’s not let this get out of hand and say things we will both regret. Maybe we should take a step back.”

Go into listening mode. It just might be possible that, out of your own insistence on being right, you are missing something your partner is saying. So consider saying to your partner, “What you’re trying to say to me may not be registering. Please explain the point you are trying to make here.”  This will also give you time to get a handle on your own feelings before they boil over.

Monitor your emotions. You know when you’re feeling so angry or frustrated that you’re in danger of saying something you’ll regret, including hurling invective and names toward your partner.  Stay in the moment. Be conscious of your own thoughts. If you’re forming names to call your partner in your mind, then chances are you’re in danger of letting them fly. Nobody knows you like you do, and you know the signs of impending loss of verbal control.

Set limits with yourself. As difficult as this can be, my clients usually admit that they know how to stop themselves from charging forward in a way that might cause emotional damage to their relationship. More directly, anger is not an excuse to call your partner names. It’s a matter of saying to yourself: “As good as that might feel right now, I’m not going to say it.”  And then don’t say it. No excuses!

Keep the focus on what’s important. The couples I work with tell me how much they want to live in home where they feel surrounded by love – a home that is peaceful, calm, joyful. That’s an environment in which your relationship can thrive. It’s also important for your emotional and physical wellness.  It’s all connected.

Make it a goal in your home to speak only out of kindness. If you do that, name-calling won’t even be a consideration.

And when you lose control:

Apologize. Immediately. And ask for forgiveness. Reconfirm how much you love your partner. Resolve to work together to improve your communication, and then get specific with each other about how you’re going to accomplish that. If you can’t do it on your own, reach out for some couples counseling.

You, your partner, and the damage caused by name-calling. You know what you need to do to keep your temper under control. Choose your words carefully with the goal of maintaining harmony and not causing damage. Listen to each other. And agree to treat each other with love and respect. You’re a team, right?

Gary McClain, MS, PhD, LMHC, is a therapist, patient advocate, blogger, and author, specializing in helping clients deal with the emotional impact of chronic and life-threatening illnesses, as well as their families and professional caregivers. He works with them to understand and cope with their emotions, to learn about their lifestyle and treatment options, to maintain compliance with medical regimens, to communicate effectively with the medical establishment, and to listen to their own inner voice as they make decisions about the future. His email is: [email protected]. He welcomes your questions and comments.

FacebookTweetPinEmailShares893
wpDiscuz
0
0
Would love your thoughts, please comment.x
()
x
| Reply
Share this ArticleLike this article? Email it to a friend!
Email sent!