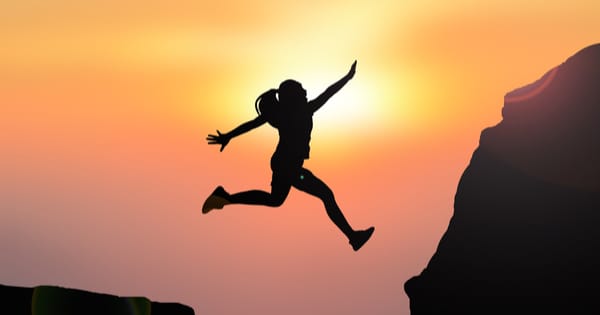 I don’t know if you’re anything like me, but I’ve always recognized that those tasks, activities or events that get me a bit scared are the ones I most need to embrace.

I’m not afraid of heights but climbing a 25’ telephone pole to then stand on a non-stationary spinning circular plate not much larger than what I typically eat my dinner on takes a healthy dose of athleticism and courage.

Although securely harnessed where the possibility of injury is rather remote, the sensation of looking down and convincing my brain otherwise was very real and rather frightening.

All this to also say that I was with three other women and as the only man in the group, exhibiting any sense of fear was strictly off limits. More on that a bit later. The weather was getting iffy and a few sprinkles had begun falling. It was already under 60 degrees and not ideal for climbing anything let alone a skinny pole.

I promptly volunteered to go first, so much for “ladies first” and being the consummate gentlemen. H*ll, truth be told, I wanted to get up and down as quickly as possible!

As luck would have it, I nimbly worked my way up the pole and after a moment of getting my footing on the spinning circular plate at the top, I was able to “make a stand” and take in the view before counting to three out loud (as instructed) and stepping off the pole to fall about 5 feet before the harness took hold and lowered me the remaining 20 feet to the ground.

That’s when the rain began to fall. Dana and the other two women took turns making the climb, reaching the top, taking a look around, before making their respective leaps back to the ground. Once we had “high fived” each other and were all safely unharnessed, the debrief was cut short due to a unanimous decision by the “leapers” to head indoors and out of the rain.

As for being the “man” of the group and exhibiting fear or the lack thereof in front of the women, I now realize that any “Quantum Leap” forward whether personally or professionally requires authenticity. In other words, just being “real” and sharing our thoughts and feelings in order to transcend from one way of being to another. In my case, verbalizing my justified fears in front of the women prior to jumping would have provided them the opportunity to be more supportive and encouraging during my climb to the top.

This simple act of authenticity would have allowed for a greater opening for not only me but for the entire group. I can only imagine where my sharing could have opened up the women to share more fully as well instead of holding any fears in so as to not appear fearful or weak.

We never know where “aha” moments are going to show up for us. Facing our fears alone eliminates the opportunity for those who truly have our back to show up and be the cheerleaders we deep down inside desire, and what they would ultimately like to be. It’s those precious moments where “bonding” between couples can be enhanced and a relationship deepened.

Share with us one of your latest “Quantum Leaps” and how it’s served you and your partner.

About Dana Lam and Martin Kupper

We are passionate about helping couples to be the Happiest Couples They Know. We want couples to stay together and it starts with making the romantic relationship a priority. We know from experience this can be challenging with or without children and that’s why we provide great resources that can help couples and families. Contact info www.funfantasyritual.com // inf[email protected] //