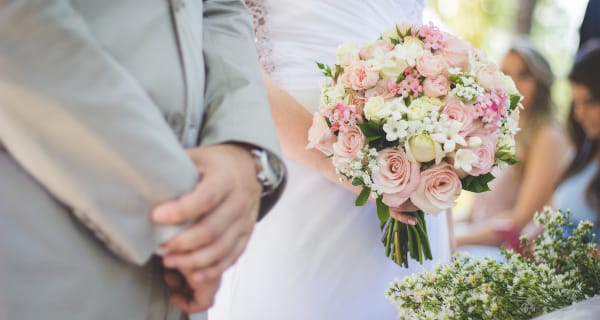 Every spring starts wedding season in the United States — a time of friends and family, celebrations, joy, and new beginnings. This wedding season I’m attending two, and am a bridesmaid in one of them. I’m genuinely excited for my four dear friends who are making these commitments and celebrating their love. Yet, as a radical feminist, weddings are starting to become something I dread — no matter how happy I am for the couple involved. The dread comes from a single, glaring, contradiction: how can I participate in such an over-the-top gendered display while remaining true to my feminist convictions?

Radical feminists see gender (or sex-role stereotypes) as a tool of the patriarchy used mainly to oppress women and wish to abolish gender entirely. Gender, for example, says men are stoic and brave while women are emotional and frail. There’s little evidence that these traits are actually inherent to the biology of the sexes, but rather our cultural expectations of each sex (gender) shapes behavior and pushes men and women to act in these stereotypical ways. While there are downsides to both sets of gender stereotypes, women get the worse deal. Feminine traits are almost always either objectively worse than their masculine counterpart (like “weak” vs “strong”) or are undervalued by society (such as “caring”). Femininity is both enforced and subsequently punished by patriarchy. This is why it is oppressive.

If women choose to try to opt-out of femininity, they are likely to face consequences for being gender non-conforming. Women who don’t wear makeup or do their hair at work may be taken less seriously, and women who display traditionally masculine personality traits (like “bossy”) are often punished for what would be rewarded in her male counterpart. Social pressure to conform to society’s norms is massive for all culturally-expected behavior, gender included, and is applied by family, friends, teachers, coworkers, and even strangers. Over time, these consequences and pressures add up to condition women to accept femininity, perhaps even seeing it as part of their identity or as a choice they freely made. This subtle conditioning is one of the most harmful aspects of gender since it makes it very hard to separate what is truly “you” versus what you have been trained to be. Clothes, appearance, and demeanor are intricately linked to our sense of self.

Many feminists intentionally choose to reject certain aspects of gender which they either feel are harmful or that they don’t personally want to participate in. Personally, I stopped shaving, wearing makeup, high heels, dresses, or anything overtly feminine over a year ago. Despite the social consequences, awkward glances, and pressure to conform this active rejection of these aspects of patriarchy helped me gain confidence, improve my self-worth, and stop tolerating other controlling male behaviors in my life.

Weddings are the epitome of gendered performance. Often sex-role stereotypes are not only on full display but are actively celebrated, like the iconic virginal white wedding dress. Sometimes, the ceremonies are blatantly sexist. At my sister’s wedding reception, she was introduced as “Mrs. Josh Whitelock.” Neither of those names is hers. None of this is truly a surprise since weddings and marriage themselves are patriarchal tools, used for centuries to maintain a system where women were treated as property that could be bought and sold. In many places across the world, they still are. For gay and lesbian couples the issue is a little more complicated since only recently do people have the right to same-sex marriage in the United States. There is an argument to be made that for gays and lesbians, regardless of the history, marriage is still a revolutionary act. Nonetheless, many feminists still reject even same-sex marriage as a vestige of the patriarchy in which they have no interest in participating.

Even when weddings don’t contain overtly sexist themes, the extravagant nature of the event lends itself to the most extreme gender performances. At a black-tie event, women are expected to be in gowns and men in tuxedos. Anyone attempting to find more gender-neutral evening wear will be sorely disappointed. In such an environment violations of gender norms become glaringly obvious in contrast to the setting. Unshaved arms or legs on a woman in a ball gown don’t pass as “hippy lesbian”, but rather “unkempt”. At a progressive wedding, like the ones I’m attending, a woman could probably get away with wearing a tuxedo if she wanted to — but, in this case, men are much more likely to face homophobic responses to crossdressing. It seems impossible to participate in a wedding without either 1) standing our like a sore thumb and possibly offending the happy couple or 2) caving and participating in regressive gender roles.

Assuming opting out of weddings entirely is not a viable social option for most, we have to make decisions about how to respond to the demand for our gendered performance. Each feminist I know handles this differently. Some decided to just lean into the spectacle of it all and consider it playing dress-up or pretend, like Halloween. Others attempt to shirk the gender roles and crossdress or hunt for the mythical gender-neutral evening attire. Personally, I tend to take a middle-road approach: I’m not going to alter my body for someone else (like shaving where I normally wouldn’t) or do things that actively cause me pain and suffering (like wearing heels), but I will put on the temporary trappings of my oppression for a single evening (or, this wedding season, two).

Although this is how I have chosen to cope with the feminist challenge of weddings, I’m still painfully aware of the hypocrisy involved. I feel pressure to conform at these events because all of the other women will be conforming and I do not wish to be a spectacle, myself, on these occasions. However, if every woman were to start shirking the expectations of femininity at weddings and other fancy events, the cultural norm would quickly change. For every compromise we make we remain one step further from the world of gender abolition for which we aim where anyone could wear whatever they please, whether it be dress or suit. Yet taking this step on an individual level requires some degree of self-sacrifice, which many women feel they are not in a position to afford, regardless of how trivial it may seem.

For now, weddings for me will remain a contradiction — a moment of compromise in a life of standing out and pushing back. I don’t believe this makes me less of a feminist, but rather a feminist who picks her battles. But since the personal is certainly still political, I imagine one day I will tire of the hypocrisy and find myself a nice tux after all.

Stay in touch! Subscribe to get feminist writing in your inbox.