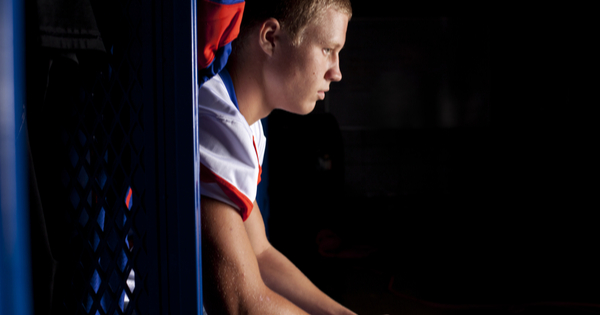 DEAR ATHLETIC SUPPORT: My son is starting junior high football this fall. He didn’t play in 7th grade, and I’ll admit, I was thankful. I’m not so much scared of him getting tackled (my son is a big boy) but more than anything, I’m afraid of the locker room. Boys at that age can be vicious. What can I do to help him get ready for locker room culture? — HELICOPTER MOM

DEAR HELICOPTER: Honestly, you don’t have much to worry about in regards to the locker room. Not anymore. Nowadays, coaches are constantly on the prowl, heading off bullying and other issues that plagued the locker rooms of yesteryear.

I will also tell you this: boys are different than they used to be. Throughout my career as a coach and a teacher, I’ve noticed a change in the American adolescent male. By my estimations, they’ve become softer, less prone to violence, that “viciousness” you cited in your question.

Back when I was in junior high, fights were a regular occurrence on the field, in the locker room, heck, even the cafeteria. Now it seems girls are much quicker to tussle. This isn’t a scientific observation. I’m just telling you what I’ve noticed from many long hours spent in a cafeteria on lunch duty — girls fight more than boys.

So there’s that. As long as your son’s junior high team doesn’t have a few knuckle-busting girls on the roster this year, he probably won’t have to worry about fights.

If you’re worried about the community showers, things have changed there as well. I don’t know why or how this change came about, but somewhere along the line, boys stopped taking showers after practice.

Nasty? Yes. Gross? Sure. But it’s the truth. Even the high-school-aged boys I’ve been around in the last five years rarely showered after practice. And if they did, most all of them wore underwear or bathing suits.

So, yes, the locker room can be a scary place, full of budding boys and testosterone, but in reality, you don’t have much to worry about. Times have changed. Boys have changed. They don’t even wear jockstraps anymore. How’s that for “athletic support?”

DEAR ATHLETIC SUPPORT: My sixth-grade son has been playing travel baseball and soccer for several years. I’ve invested a lot of money in these sports. But now my son wants to focus on football for the fall and take a break from his travel sports until the conclusion of the football season.

Should I allow my son to primarily focus on football, or tell him he needs to continue to emphasize travel baseball and soccer, since I have invested so much money in those two sports? — (HOPEFUL) D1 DAD

DEAR D1 DAD: You should let your son play whatever sport he’s interested in. Period. Parents should never “invest” in their kids, especially if this “investment” is made in hope of future returns (e.g. scholarships, signing bonuses, or fancy new cars).

Instead, parents should support their children and nourish their interests. Let them “play” sports. Little League Baseball shouldn’t feel like a full-time job. Your son is in sixth grade. He doesn’t need to specialize. If he’s good enough to play sports at the next level, the college coaches will find him, when the time comes.

So, even if you’ve dumped bookoos of money into a sport he eventually quits, as long as your son enjoys the game, learns life lessons and makes friends, then I’d say that’s a wise “investment.”

Facebook12Tweet3Pin1EmailShares16
wpDiscuz
Share this ArticleLike this article? Email it to a friend!
Email sent!