I think he mentioned it first during an interview for Get Jiro!: Blood and Sushi, a prequel to our New York Times’ #1 best-selling graphic novel, Get Jiro!

“Edo period Japanese ghost stories” was how he presented it to me, as I remember. “One hundred samurais in a dark room, telling stories to scare the shit out of each other.”

Sounded good to me. What could be better? I was on board.

Tony and I were friends for thirty-five years. I had grown up in the restaurant business in New York City. My father was a waiter at the Stage and then the Carnegie, and I had worked as everything from dishwasher to busboy to waiter to host at the old Bethesda Fountain Café in the rollickin’ sixties.
​
What Tony had been talking about was a seventeenth-century game, Hyakumonogatari Kaidankai (100 Candles), played as a samurai test of courage.

One hundred warriors gathered to play the game. For each individual, a candle or andon was lit. The candles were arranged in a separate room and a mirror was placed on a bare table. One by one, each samurai had his turn at telling a tale specifically told to scare the pants off fellow warriors. Their stories were of yurei, yokai, obake, jikiniki and bakemono, eerie, horrible, in some cases: reprehensible, weird beings of supernatural ancestry. After each tale told, the individual teller made his way solemnly into the adjoining room, blew out a single candle, and had a peek in the mirror for any tell-tale sign of a demon had invaded during the telling.

Rarely, did the game get to its end? As the candles drew fewer, the room darker, invariably the samurai became too frightened to continue and abandoned the challenge.

From the beginning, Tony and I made the decision to transform the samurai into chefs. He had thought of a framing device: a Russian oligarch and a charity auction in which the oligarch has won the chefs’ services. They all gather, oligarch, dinner guests, and cooks on a dark, quiet night on a windswept cliff.

One thing we wanted for certain, our stories needed to populate the stomping ground where food intersected with horror.

And where was that? we asked. Where did it begin?

Right off the bat, Adam and Eve came to mind. The apple. Pure horror and involving food. Okay. And then there was Sodom and Gomorrah? Lot’s unnamed wife turned into a pillar of salt. Herbs and spices, for sure.

So to our mind, we were on solid ground. Tony was an aficionado of many things. We could talk about “guising,” the Scottish tradition of dressing in costume, in order to traipse through the countryside begging for food. Our own trick or treat, derivative, straight outta Scotland.

But Tony wanted to play in a murkier depth. Food as temptation. The glutton is punished. The stingy. The uncouth. We spoke of the Korean masterwork, Oldboy, and the scene therein featuring the consumption of a live octopus, Hannibal Lector, and his fava beans. Poltergeist, meat and maggots, and, of course, Peter Greenaway’s The Cook, the Thief, His Wife & Her Lover.

But that’s not where we wanted to be. Where we were at in our imaginings was right smack dab on the brilliant lines of the classic E.C. Comics, pre-code, masterworks: Tales of the Crypt, Vault of Horror, The Haunt of Fear and their exquisite constructs: the Crypt Keeper, the Old Witch, and Vault-Keeper.

If only we could emulate those.

We were excited. We began to discuss what kind of stories we wanted to tell and how to do it. Our page count was limited, out of necessity, so we had to be able to tell our stories cleanly and clearly.

So my research was double-fold.

I went to Lafcadio Hearn’s legendary work, Kwaidan: Stories and Studies of Strange Things. Searching for 18th century, Edo period Japanese ghost stories, the place you’re going is there. Written in 1903, in order to recreate and convey such richness of tales, legends, fables, and culture, until then unheard of in the west, Hearn drew on a lifetime of personal research and original translations, both Chinese and Japanese. For us it was a magnificent volume of entry, wonder, and delight, replete with plenty of period art and pictures and it was our way in, big time. 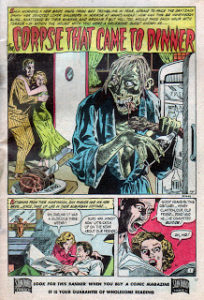 In the comic treasure trove, Tales from the Crypt, we found a featured story from 1952 called, ‘Taint the Meat, It’s the Humanity.” That one was about a butcher who serves his customers horse meat and then tainted meat. When he mistakenly poisons his own son, his wife takes her revenge. Murdering him and butchering his body into serving portions to sell to his customers.

Standard Comics, Out of the Shadows #9 has this cool story, penciled by one of the all-time great comic book artists, Reed Crandall, called “The Corpse that Came to Dinner” about a scorned lover, back from the grave, who has only one interest, and that is, to eat.

Eerie Publications’ Tales from the Tomb, had a story called, “Chef’s Delight,” the tale of a wronged wife who slices up her chef husband and serves him as charcuterie to his compadres.

So the models were there. What we needed to do now was find story ideas to support the food horror we wanted to invoke. Yum!

We kicked around a bunch of ideas. The stories we were drawn to, wanted to tell. The stories that thrilled us, the way we could tell them. In all truthfulness, up until then, I didn’t really get it: food and horror, the correlation in Tony’s mind. What he was looking for, where he wanted to go with Hungry Ghosts.

We were going to tell eight stories. We sketched out seven, but couldn’t settle on the eighth.
I came up with a couple of ideas I thought we could work with. One was called the Soft-Shell Turtle, about a guy with an obsession for eating anything-and-all turtle and the revenge the turtles eventually take on him.

The other story idea involved a kappa, a terrifying demon of legend with a shell on its back and a bowl on its head. The story goes kappas have an obsession for a secret ball hidden away, deep in the tail end of the alimentary tract and consider it a particular delicacy and will avidly (and vociferously) crawl up your ass looking for the specified ball to satisfy that specified craving.

Any guess which story idea my friend and partner opted for?

For Tony, the driving force of our stories needed to be retribution for sins perpetrated and brutalities rendered. In horror, Tony was looking for morality, not unlike Aesop, and once I realized that and came to terms with it, all our stories in Hungry Ghosts bent that way.

The title of our problematic eighth story originally was “Small Anus Ball” but we were asked to change it, and we did, to “Deep.”

The moral of that story was no brutalization of another human being goes unpunished. Tony’s was a generous spirit. A warrior, a defender. I gaze in the mirror of our own particular Hyakumonogatari Kaidankai and now that he is gone seek his reflection, looking for his ghost in me, yurei or yokei, looking for his strength, one hundred candles burning bright.

if you are local to NYC Tri-State area, consider Attending a unique Speakeasy event.