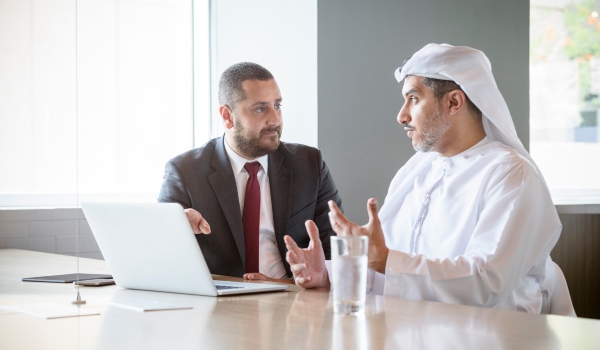 —
Without the ability to travel time it may forever be impossible to restage the medieval and early-modern viewing conditions of Islamic manuscripts. Whereas in paintings books are often shown being enjoyed outdoors, architecture can offer insights into the experience of manuscripts indoors.

Consider the wholly illuminated central prayer niche (miḥrāb) at the Jāmi‘ Masjid of Bijapur in Deccan India (mosque: 1576; miḥrāb: 1636) (fig. 2). The entire niche is covered with calligraphy and micro-architectural details that are a mise en abyme within the mosque. Hanging lamps and manuscripts that likely represent the Qur’ān fill smaller niches at the dado level flanking both sides of the central niche. The books bear gilt bindings and the lamps have delicate golden tassels that accentuate their light-giving quality. The simple juxtaposition of lamps and books reminds us that the viewers of these manuscripts did not encounter them under the harsh lighting of today’s modern libraries. In an assessment of illumination, the problem of light is inescapable.

Generally, manuscript illumination is a practice where reflective substances have been applied to the surfaces of books. These surfaces include the binding, support (paper, parchment), and the edges of the support. While illumination is most commonly associated with gold, other metals including silver and tin are also used to create lustre. I refer here to gold as shorthand, but the material was in fact a liquid gold or alloy that was malleable to various surfaces and showed a variety of hues. This material can be flattened, painted, scattered, and pricked to create different effects on the surface of a support (fig. 3). 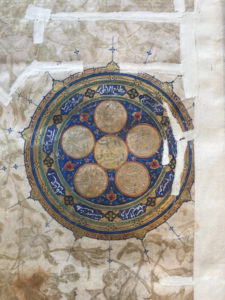 Illumination occurs everywhere on the page: its edges, borders, line rulings (jadval), rosettes (shamsahs), frontispieces (sarlawḥs), headpieces (‘unvāns), headings, interlinear space, the writing itself, and even the edges (fig. 4). There is no authoritative handbook for these terms in Arabic, Persian, Turkish, Urdu, etc., and this nomenclature has evolved with convention. For example, the term ‘unvān has caused some confusion. The word literally denotes ‘title,’ and therefore I have used it for headpiece. In the British Library’s Persian manuscript catalogue edited by Rieu, ‘unvān denotes anything from illuminated headpiece to frontispiece (single or double page) to heading. Beyond references to illuminators (mudhahhib), the practice of illumination (tadhhīb), other words formed with the Arabic root dh-h-b or the Persian word zar, the textual record offers remarkably little prescriptive terminology for illumination. Even less defined are the names for particular illuminated patterns. While some of these patterns have analogues in architectural ornament, they do not always seamlessly translate to book decoration. For this reason, one safe compromise is to use English words, yet this can often be dissatisfying. 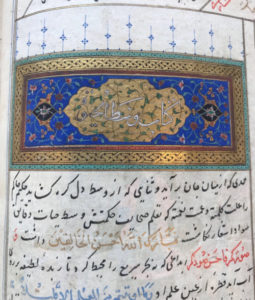 Regardless of the lack of an established technical vocabulary, illumination and light (nūr) are everywhere in Islamic art and architecture. This is best attested by the Qur’anic Light verse (24:35) that begins, “God is the light [nūr] of the heavens and the earth; the likeness of His light is a niche [mishkāt] wherein is a lamp [miṣbāḥ],” which frequently graces miḥrābs. Widespread lamp imagery such as that found in Bijapur’s Jāmi‘ Masjid also alludes to it. When books like the Qur’an or poetry reflected light through their illumination, this took on a divine significance. Through technologies such as multi-spectral imaging it may be possible to recover how premodern manuscripts looked by candlelight and evaluate the effects of how different lighting changed the experience of these books. Collaborations between architectural historians and scientists have started to reveal how sites such as the Mosque of Córdoba looked when lit with early Islamic glass lamps (Kider, Fletcher, Yu, Holod, Chamlers, and Badler, 2009). 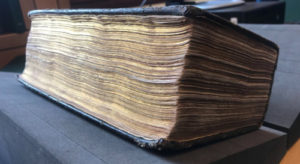 In painting, illumination has been applied to nearly all forms. Fire, the sun, skies, and halos are popular gold elements. In her several articles and books on images of the Prophet Muhammad, Christiane Gruber has demonstrated how this tradition evolved. On the double-page frontispiece of the Khamsah (Quintet) of Amīr Khusraw Dihlavī dated 1571 from Safavid Qazvin (Fig. 5), gold is deployed profusely in a scene showing the Prophet’s ascension (mi‘rāj). In the flowering cartouches in the borders, the swirling clouds, and the fire they cast upon the Prophet and his steed Burāq, this page is fully illuminated. The dramatic interplay of these gold swirls and lapis blue surface would have created a startling effect especially if this page were viewed in low light. In experiencing the open book, the light of Muhammad (nūr Muḥammad) would have certainly shone onto the viewer.

The study of book illumination should be placed in an expanded visual context that also includes architecture. In an early fifteenth-century Deccan shrine/tomb initially studied by Helen Philon (2000), I later drew comparisons between its domed apex and specific Indian maṇḍalas or yantras that Philon previously compared to Islamic talismanic bowls as well. Yet, the entirety of the shrine is covered in gold illumination. One of the clearest comparisons between the apex and a manuscript would be an illuminated shamsah or starburst. The completely calligraphed golden dome when lit with lamps would reflect light onto visitors below.

Illumination in Islamic manuscripts thus is no simple matter. Here, I have tried to make its obvious connection to light both practically and spiritually. While the majority of my research for the British Library has involved developing a method to catalogue illumination in Persian manuscripts (ca. 100 manuscripts completed), I do sometimes imagine the buildings and spaces in which they once were read, enjoyed, and seen. For, illumination allowed books to emanate light.

With thanks to Umberto Bongianino, Eleanor Sims and Ursula Sims-Williams.