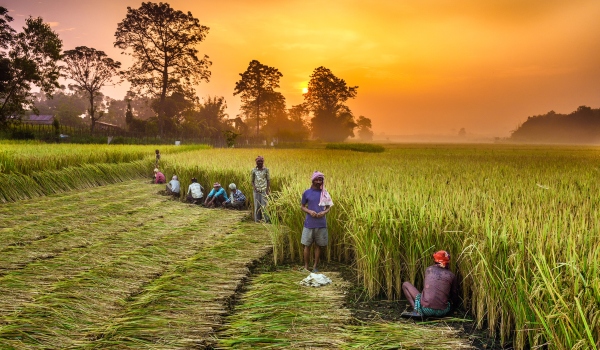 KATHMANDU – Life has been good in the past few years for Saraswati Bhetwal, a farmer in the small village of Lanndhi, about 50 kms north of Kathmandu, Nepal’s capital.

Better road connections with the city mean farmers in the area have switched from subsistence agriculture and growing rice to cultivating cash crops like potatoes, cauliflowers and beans. More cash has led to increased educational opportunities, better access to health care and a general improvement in livelihoods.

“Then, in early January, I saw frost on the ground”, says Saraswati, who, as generally with women in Nepal, does most of the agricultural work. “It destroyed all the potatoes and hurt the other crops. For days I was so upset I could not go to the fields – we’ve lost all we invested. It is very hard.”

Saraswati, 46, is not interested in debates about climate change and whether the glaciers in the high Himalayas are melting. But she and other villagers do know that something strange is happening with the weather in this mountainous, landlocked country of 30 million people, the majority of them farmers struggling on or below the poverty line.

Lanndhi is among a group of low-lying villages tucked away on a valley floor with a year-round temperate climate – till now, a seemingly ideal area for vegetable growing.

“We never had a frost like that before”, she says. “The weather is changing. The monsoon comes later each year. There are more warm days and more pests. And the winter rains are less frequent.”

The Himalayas – the world’s biggest and highest mountain range, stretching from Afghanistan and Pakistan in the west to Yunnan in southwest China in the east – are, together with the Tibetan plateau and surrounding mountain ranges, often referred to as “the Third Pole”, containing more ice and water than any other area on the planet outside the Arctic and Antarctic. Overall it’s estimated that about three billion people – more than 40% of the world’s population – depend on the food and energy produced in the region’s river basins.

“While measurements indicate the total amount of monsoon rainfall in Nepal has not changed, the timing of those rains has altered”, says Dr Bed Mani Dahal of the Department of Environmental Science and Engineering at Kathmandu University.

“Overall the number of days it rains is less than in the past. But when it does rain, the volumes are greater: violent downpours and hail can destroy crops. The weather is just not as predictable as it was before.”

Dr Dahal says that besides changes in weather patterns, farmers are facing another serious problem. The rush into cash crops in recent years has led to overuse of land and loss of topsoil. Increased fertilizer and pesticide use is polluting water courses.

“We don’t know when the rains will come or if there will be enough water. It’s not like before”

Scientists say changes in climate are more evident in the Himalayan region than in most other areas of the planet. As part of a US$ multi-million programme funded by the Norwegian Government, the Kathmandu-based International Centre for Integrated Mountain Development (ICIMOD) and two Norway-based environmental and scientific organisations (GRID-Arendal and CICERO) are seeking ways to help Himalayan farmers – particularly those living in mountainous areas – to cope with an increasingly uncertain future.

“What’s clear is that while villagers may not be aware of the concept of climate change, they are seeing changes on the ground and are asking us what it is they should do”, says Arun Shrestha, an ICIMOD project manager.

Nepal has made considerable progress in recent years in developing its agricultural sector and improving overall living standards. Changes in climate could now threaten that progress.

Saraswati Bhetwal looks at the black, dead stalks on hundreds of her potato plants. Compared with many farmers, she is relatively prosperous but says that with a failed crop and little spare cash, finding the money to invest in tubers and seeds for sowing next season will be hard.

“Farmers have many problems”, she says. “Now we don’t know when the rains will come or if there will be enough water. It’s not like before – and it’s just one more problem to deal with.” – Climate News Network