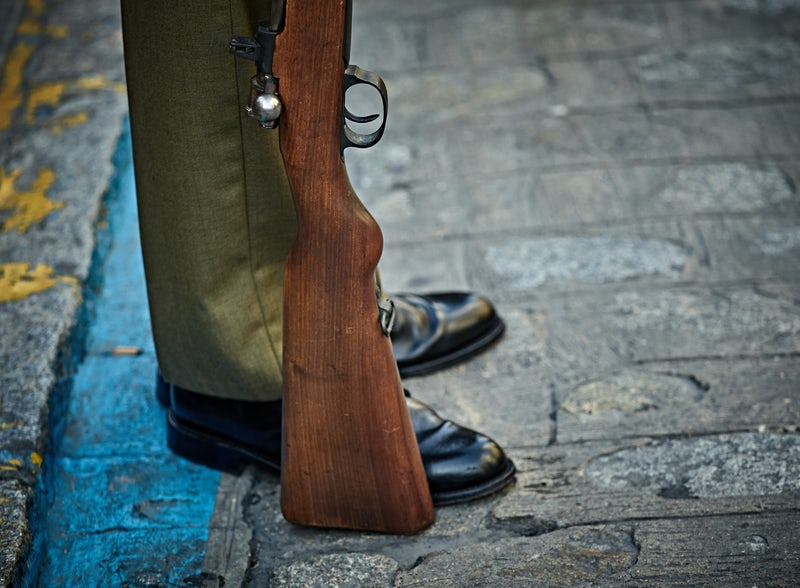 My father loved guns. He was a hunter. He had two rifles under his bed and a bow and arrow for deer hunting in the basement. The magazine rack in our bathroom was filled with back issues of American Rifleman and Shooting Illustrated. I remember flipping through them and wondering why there were only men in the pictures, and why they all dressed in camouflage pants and jackets and held guns like prize fish.

When I was ten, my father took me into the woods and showed me how to shoot a rifle. The kickback nearly dislocated my shoulder. For better or worse, probably because I was a girl, he didn’t pressure me to care about guns, or learn to shoot them. My brother was a different story. “Real men have guns and use them.” My father made this clear. When my brother was sixteen, he finally got up the courage to be honest with my father. I remember walking into the living room and seeing my father by the fireplace with his back to my brother. “I hate guns!” my brother yelled, tears streaming down his face. “I’m not shooting them! I’m never owning one!” Their relationship never recovered.

Once, my brother left a BB gun loaded in the tower of our summer house, and my cousin pulled the trigger. The bullet went through my thigh. Being shot doesn’t feel like you might expect it to. It’s a hot, many-sided razor snapping open in your entire body—not just in the spot where you’re hit.

Even a BB gun–aimed at the right spot–can kill, I found out later. Luckily, my cousin hadn’t raised the barrel. A doctor removed the lopsided metal disc that had once been a cylinder from my leg, handed it to me, and gave me four stitches at the exit point (which I just now paused and counted). On its way through me, the BB had transformed into something that resembled a virus seen through a microscope. Four decades later, the entry-points of the stitches by the suture where the doctor removed it are still visible.

My father beat my brother and cousin—my brother for leaving his gun out and loaded, my cousin for pulling the trigger. But they weren’t the ones who deserved to be chastised. Why did my father love guns so much, and so blindly? Why did he want my brother to love them, too, or else endure his acidic disapproval? Why do so many guns fall into the hands of angry men? Why are so many women killed in domestic violence disputes by their partners, who were able to get guns more easily than a marriage license?

Why are so many suicides caused by guns their owners bought without a background check, without a wait-time that might have saved their lives? Why are curious children raised in a toy-gun culture able to pull the trigger of a gun their parents forgot to secure? Why are black kids ten times as likely as white kids to get shot? Why does the NRA block any and all measures to create a safety-lock system that insures only their owners will be able to pull the trigger? Why are adolescents able to commit mass murders with assault weapons? Why are there so many gun shows, with virtually unregulated gun sales?

Why do gun lobbyists block the safety features that could save millions of lives? Why do we require permits, trainings, safety belts, helmets, and background checks for cars, motorcycles, bicycles, and jobs–but not for guns? Why are gun manufacturer’s so rich?

I’m a very lucky shooting victim, because I’m here to wonder about it.

7 Counterintuitive Ways to Deal With Jealousy

What’s Your Number One Rule for Life?

Why Are Men So Angry?

The Price You Pay for Believing in Sexual Chemistry

Photo by Vidar Nordli-Mathisen at Unsplash

Facebook82TweetPin2EmailShares84
wpDiscuz
0
0
Would love your thoughts, please comment.x
()
x
| Reply
Share this ArticleLike this article? Email it to a friend!
Email sent!