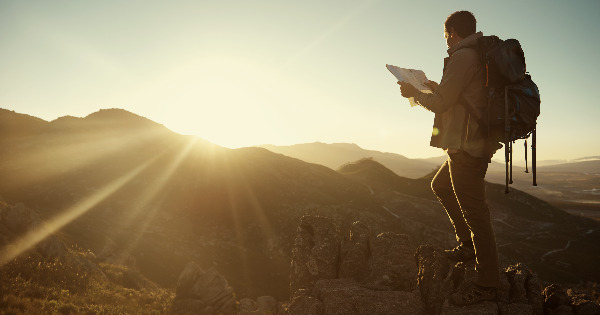 We have to own where we are before we can start toward where we want to go.

I knew a guy who wanted to go to Georgia. To this day I don’t know why he was so hell-bent on going, but he was. He had pictures of Georgia on his wall, and the peaches he ate had to come from there. He even worshiped the Atlanta Falcons football team. He wouldn’t stop talking about the place.

We were hanging around one day, this guy and three or four of us.

And then Georgia-boy launched into yet another speech about how awesome it was.

We all had our dreams, but none of them matched his in terms of specificity. He lived every day almost as if he were there. But he never made it to Georgia.

Why? Because he refused to believe that he had to start in Oregon, where he lived.

This guy hated Oregon. This baffled me, because I loved it. We all had a lot of fun in the woods and mountains, the rivers and the Pacific Ocean. But Georgia-boy decided that he lived in South Carolina, which isn’t very far from his goal. He could never admit that he lived on the west coast of the US. Pretty far from where he wanted to be.

I took him aside, one day.

“Brother… you live in Oregon. That’s about a nation away from Georgia.”

“See?” he said, pointing at it. “South Carolina. Rains a lot. They grow a lot of flowers. People are pretty nice. Lots of green. And it’s close to Georgia.” He was speaking in a drawl, as if he was already there.

Now I was getting concerned.

“Dude… you’re pointing at South Carolina, but you I’m telling you, we all live in Oregon.”

“Nope. I live in South Carolina. I’m close to Georgia, and I’ll be there, soon.”

Well, the day came when it was time to part, each of us to where we wanted to go. As I said, no one had a vision as strong as his. But he never made it because he was unable to admit the truth about where he was starting.

Another one of our group developed a similar penchant for Uzbekistan, of all places. That’s a lot further from Oregon than Georgia, right? His maps were far more complex. He didn’t always follow them, either. This guy’s challenge was that although he knew where he started, he often forgot to make adjustments as he traveled. Eventually he developed through practice the ability to consult the map every day of his life. He was way off course at one point, but he courageously admitted it and made the necessary corrections.

The last I heard of my friend Georgia-boy, he was wandering somewhere in the Yukon. The other guy is living happily in Uzbekistan. He hasn’t been there long – like I said, it’s a way from home base – but he’s there.

The point is this: if we can’t admit the truth of where we are, we’re making a critical mistake. We don’t have to focus on it, but we do have to acknowledge it.

The Universe will provide the map to wherever we want to go, generally. I believe we are far, far more powerful than most of us were taught to believe. Do you want to go to YOUR version of Georgia? Do YOU have a vision board, like Georgia-boy? Do you talk about the great things you’ll do when you get there?

I recently wrote about “Finding My Why,” the overarching vision of what we are trying to achieve. That’s Georgia, right? The Universe’s job is to give us the map to where we want to go.

But if we don’t respect that map enough to admit the truth of our starting point, the map is useless.

In terms of consciousness, that means understanding the sacred Present moment. Accepting it. Even loving it. Not for the facts of it, necessarily. Sometimes the facts we encounter in the present kind of suck. But we accept the facts because they’re in the Present and by God, we’re still here. That means that if we’re still sucking oxygen, we can still get to Georgia if we want to badly enough. That alone is reason to celebrate each moment. It means that in any moment I can step one step closer to where I want to go, if I choose to. If I can learn to love the present for its own beauty, well then, we’ll be one of those people who seem to be happy, all the time.

But it all starts with the courage to accept where we are every day.

In “The Owls: A Warrior Society,” we mandate daily check-ins against “the map.” This includes our 7 Non-Negotiables and 10 Aspects of The Owl Code. These include both personal habits and certain virtues like Honesty, Health, Strength, Integrity, Respect, and others. You don’t have to be an Owl to do this kind of work. But if you want to get to Georgia rather than the Yukon, you do have to be able to admit where you are.

Are you addicted to something? Any addiction might as well be water on a watercolor map. Addictions of any kind – anger, self-righteousness, sex, drugs, whatever – tend to occupy decision points. Lose them or run the risk of losing the map. Maybe you’re lazy, or habitually use people. Whatever the vice, it has an impact. Some more than others. The first step to overcoming it is to admit it.

But hey, these are all nasty things to admit to oneself, right? No doubt about it. But if that’s where you are, that’s where you are. So what? Don’t stew in or on it. Certainly, don’t assign poor self-worth to yourself because of it, either. No one’s perfect, and many of us aren’t even good sometimes. So what? None of that matters. It’s what we’re willing to do with it RIGHT NOW that matters.

Do you have the courage to admit where you’re starting? In Oregon, rather than South Carolina? Sometimes the best action we can take is simple admission of the truth.

If you haven’t taken the opportunity for self-evaluation for a while, it may be time to get ugly with yourself for a moment. See the facts. Understand them. Call them as they are. Feel all the nastiness where the feelings of worthlessness want to lodge in your physical body. And then release the energy around it by whatever means you have at your disposal. Then, courageously and dispassionately chart a course.

You can get to Georgia. I guarantee it.

Better yet, you have support: a whole seen and unseen support staff. The Universe itself will support you, as long as you’re willing to read the map every day and keep putting one step in front of the other. You’re going to make missteps. When you do, catch it as soon as you can, consult the map, make adjustments, release judgement and self-hatred, and get back on track.

That’s the work, and there’s no work that’s sweeter.

When you get there to Georgia, make me a bowl of sweet peaches in cream, and call me. I’ll come join you.

Uzbekistan ain’t that far from there, is it?

Eric "Aspen" Marley is an author, spiritual coach and construction manager living in Central Oregon. A seventh-generation Mormon until 2008, he has found deep meaning in Lakota spirituality and Andean shamanism while honoring his LDS past. He can be reached through his WEBSITE.